Chigi Chapel in the Basilica of Santa Maria del Popolo

Walking through Rome and looking at its buildings, we are constantly  reminded of him – this is often brought about by the motif of six mountains (monti) with an eight-pointed star, incorporated into the architecture  – all elements of the acclaimed and well-known in Rome, Chigi family, from which the pope came. Its most noteworthy representative was the XVI century banker and patron of the arts, Agostino Chigi (Magnifico).

Modest, diligent and very religious, Cardinal Chigi came to be known as a devoted and incorruptible papal secretary of Innocent X, and a bitter enemy of his sister-in-law Olimpia Maidalchini. As pope, initially to the joy of Romans, he seemed to be wholly against nepotism, claiming that, as Fabio Chigi he has many relatives, but as pope none. Both the ambassadors residing in Rome, as well as cardinals were concerned with this situation, while Spain angry at not appointing cardinal-nephew, since such an appointment would create the possibility of influencing the pope, claimed openly that this is an affront to the royal family. Therefore, soon the pope appointed his nephew Flavio to the post of papal nepot; from Siena came the pope’s brother Mario and nephew Agostino. As it turned out, in their actions leading to the emptying of the treasury, such as buying of land and building residences they matched their predecessors. Cardinal Flavio Chigi was known for his love of the performing arts, he was also considered a trendsetter at the time, as well as the most handsome and elegant of all cardinals. He was the one who started the fashion  to use luxurious French carriages in Rome. Other weakness of his included romances, mainly with singers, clothes, as well as refined cuisine. His artistic tastes are reflected by decorations of bedrooms at Palazzo Chigi, where he resided – some of the most magnificently decorated interiors of those times. They were decorated with paintings of mythological and erotic content, by Baciccio himself.

In contrast to his nepot, the pope struggled with illnesses all his life, illnesses which it seems notably influenced his perception of reality and the conviction of the insignificance of human life. A symbol of such attitude was the decoration of his modest study – a skull sculpted by Gian Lorenzo Bernini. Perhaps, also the memory of the difficulties with the burial (there was no coffin to lay the body in), of which he was witness during the last moments of the earthly journey of his predecessor Innocent X, caused him to have a lead coffin prepared ahead of time in his bedroom. Alexander VII, got rid of all luxurious items and gave money away to the poor, while his cupboard was filled with brass cutlery and clay plates.

As an Apostolic Nuncio, Fabio Chigi spent a few years in Cologne and later in Münster, where he participated in the negotiations of the conditions of the Peace of Westphalia. At that time he wrote humorous poems to his friends:  with witty jokes he complained about the never-ending rain, black bread – which he claimed – he wouldn’t even give to a beggar, the simple German cuisine and the beer, which he referred to as slush.

During the signing of the Peace of Westphalia, as well as later quarrels with France, when the authority of the Holy See was questioned, he personally experienced that it was not Rome, but Madrid and most of all Paris, that were the de facto capitals of Europe. Perhaps this awareness was the reason for the gigantic construction ventures, which Chigi undertook later during his pontificate.  In this way he wanted not only to show the power of the State of the Church, but most of all of the Church itself. Rome was to be a city of pilgrims, but also a center of culture and art, the cradle of antiquity and the center of modernity pulsing with ideas. In this regard Alexander VII was a continuator of the vision of Urban VIII and, similarly as during the pontificate of said pope, Gian Lorenzo Bernini, became the principal artist and papal architect. As phoenix rising out of the ashes, he came back to life after the unfavorable period of rule of Innocent X, and claimed for himself the whole artistic space. The pope consulted with him at every project,  bestowed him with his unquestionable trust, which was reflected in entrusting him with supervision over the papal palaces, St Peter’s Basilica (San Pietro in Vaticano) and The Castle of the Holy Angel(castel Sant’Angelo).  The most spectacular work of both visionaries was the new arrangement of St Peter’s Square (Piazza di San Pietro) in front of the Vatican basilica. The pope’s notes shed light on their work – together they consulted on the conceptual design and together they inspired each other.  None other than Bernini was also the author of the  design of the pope’s tomb in the Vatican basilica.

The name of Alexander VII will be remembered by Romans, not only thanks to the monumental structures he commissioned and his architectural plans, but also thanks to large-scale modernization works taking place in the city at that time – newly set out Roman streets and squares. He provided the city with a new dimension, which is best experienced at the Piazza del Popolo, since it is in this part of the city where the pope began his urban plans. It was not done without reason – the Chigi family was connected with the Church of Santa Maria del Popolo, through the family chapel found inside it, while Fabio Chigi himself, when still a cardinal had his parish there. Piazza del Popolo was also the arena of a significant triumph of the pope – it is here that the Swedish queen Christina entered the Eternal City, greeted enthusiastically by all, when to the joy of all the Catholic world, she converted to the Catholic faith.

The tomb of Pope Alexander VII – despite being planned almost since the start of the pontificate and entrusted to Gian Lorenzo Bernini, was completed many years after the pope’s death, in the years of 1671-1678, thanks to the aforementioned pope’s nephew, Cardinal Flavio Chigi. It is found in the left nave of St Peter’s Basilica. Made of Carrara marble, jasper and gilded bronze it is not as imposing as the tombs of its predecessors. The statue of the kneeling pope, placed in a decorative niche is accompanied by personifications of the four virtues – Caritas (Love), Justitia (Justice), Fortitudo (Fortitude) and Prudentia (Prudence).  The whole is perversely finished with the figure of Death with an hourglass in hand, emerging out of the drapery.

The most important buildings  and urban developments completed during the pontificate of Alexander VII: 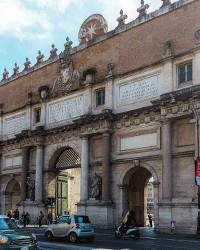