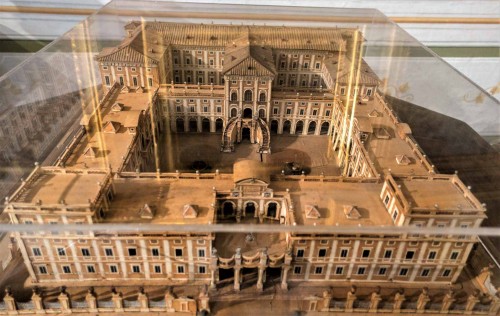 Portrait of the Queen of Sweden – Christina, Palazzo Corsini 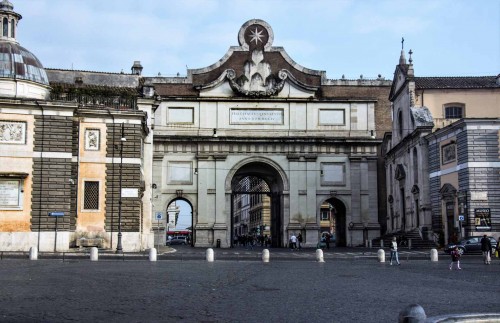 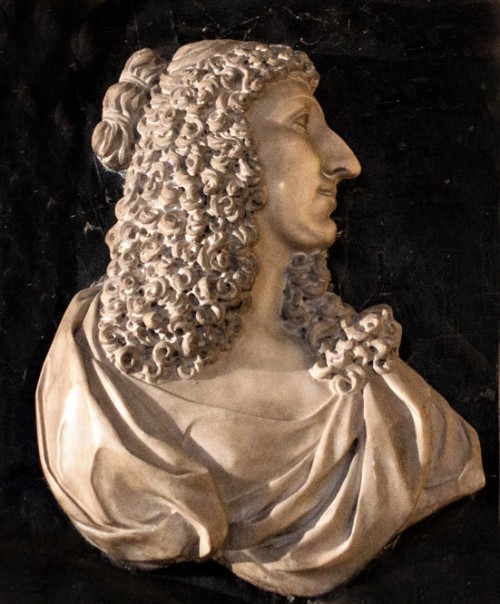 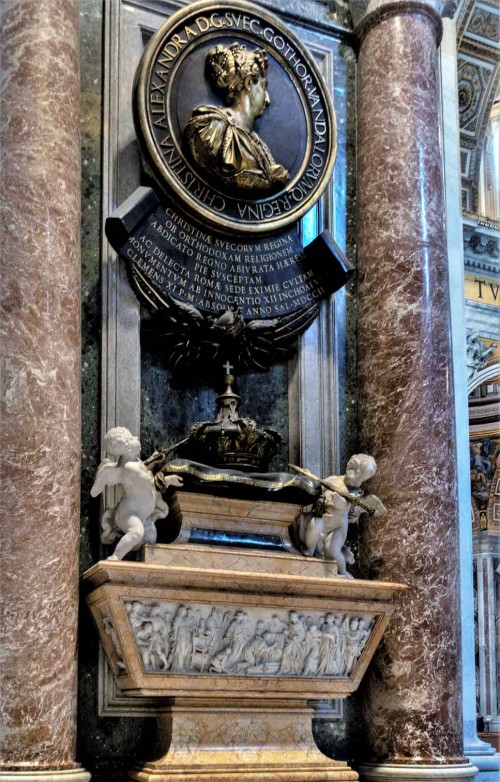 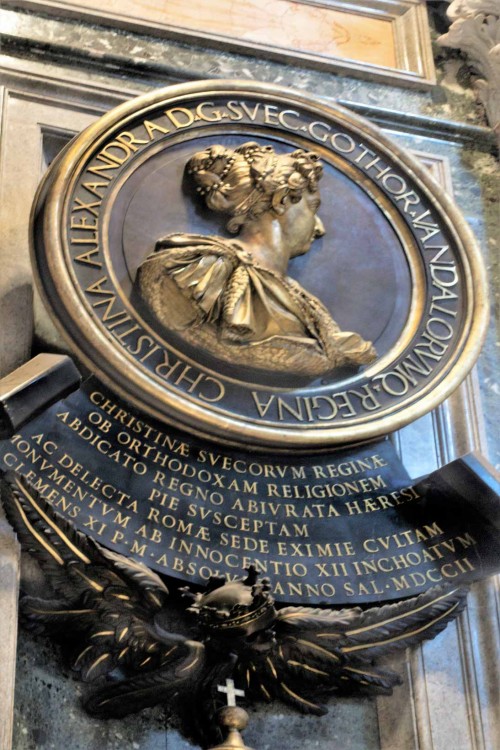 Statue of the Queen of Sweden – Christina, fragment, Basilica of San Pietro in Vaticano 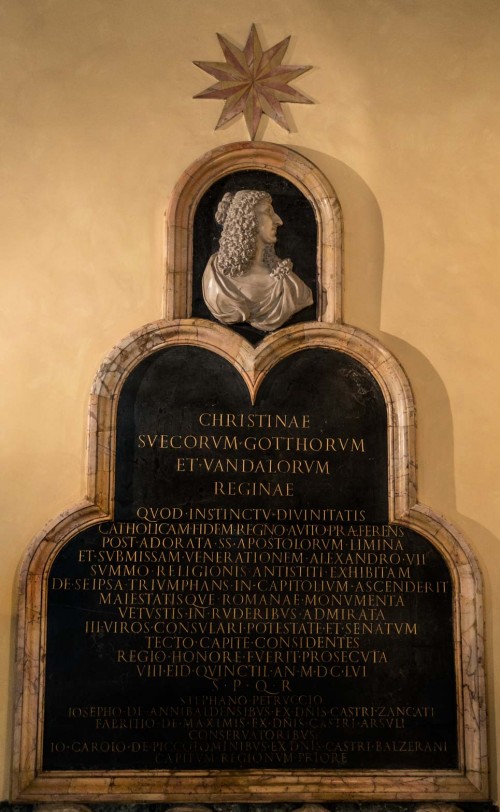 Parade at Palazzo Barberini for the occasion of the arrival of the Queen Christina in Rome and her conversion, F. Gagliari, F. Lauri, 1659, Museo di Roma, Palazzo Braschi 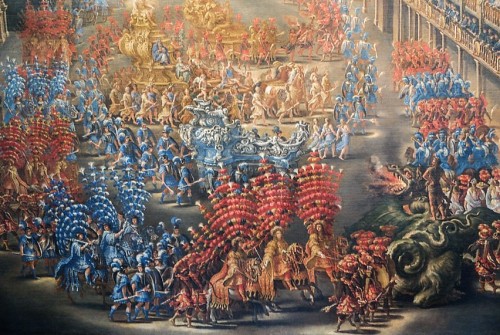 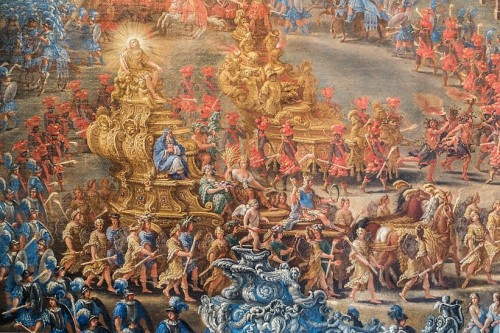 When the fireworks and cannon shots were finished, Christina, who after coming to the Eternal City, took on the name of Maria Alexandra, turned out to be a very problematic guest for five subsequent popes. She came with an entourage which consisted almost exclusively of men. Crude jokes, manly form of entertainment, such as card games, hunting, swordplay, but most of all men’s clothing and short-cut hair, were far removed from the way the dignified convert was imagined. And it was not so much her intimate relations with men, for instance Cardinal Decio Azzolini, of which she was accused, that shook the Roman world, but the strange otherness of the queen. One of the travelers who came to the city, described her in such a way in 1654: “She is of average height, with high shoulders, lively eyes, slightly hunched nose. There is nothing womanly about her, besides her gender, her behavior, way of moving and even her voice are completely manly”. In addition Christina hated the company of women, but if she did feel a liking to one, then it turned into an almost slave-like devotion. Some of the researchers who have studied Christina, suspect that she suffered from a disorder of differentiating gender, the so-called, pseudo-hermaphroditism; unfortunately, an autopsy conducted in the XX century, could neither confirm nor disprove this theory. Apart from that the queen did not want a husband, claiming that “marrying requires more courage than war”, she also did not want to be locked away in a monastery, while her religiousness left a lot to be desired. She loved erotic literature by Pietro Aretino, she “removed” all leaves covering intimate parts, from ancient sculptures in her Roman residence, and in addition she enthusiastically purchased mythological paintings of rather frivolous nature, for her collection.

Christina also suffered from a constant lack of money. The salary she received from the pope, did not suffice her expensive lifestyle, to which she was used, while the Swedish apanages which she received after her abdication she invested in the purchases of paintings and manuscripts. As if that was not enough, life in Rome quickly bored her, to the joy of the pope, who hoped that each departure from the city would be the last. First she wanted to return to Sweden, then in the name of France, she wanted to rule the Vice-Duchy of Naples and when it turned out nobody shared her enthusiasm for these ideas, she decided to take the throne of Poland, after the abdication of King John II Casimir. When the Papal Nuncio came to Poland, in order to check if the candidacy of Christina would be accepted, the Primate Mikołaj Prażmowski, assumed it was a joke, and even the perspective of uniting Poland with Sweden did not convince him to accept the Europe-famous queen. He claimed, that if Christina would be recommended “the whole country would roar with laughter, while the queen and the pope would be ridiculed all over Europe”.

In time Christina’s temperament lessened, while her excesses quieted down – she moved into the Palazzo Riario (presently Palazzo Corsini), on the Tiber, she settled down and began surrounding herself with artists, writers and musicians, becoming a true patron of the arts. Gian Lorenzo Bernini visited her, Alessandro Scarlatti was her choirmaster, while Arcangelo Corelli the chief conductor of her orchestra. Christina was a great admirer of music. In 1671 she established the Teatro Tor di Nona, the first public theatre in the city, where women acted on stage, however, only for five years since the idea definitely did not appeal to the following pope (Innocent XI). She also acquired a sizeable collection of manuscripts, which she entrusted to the Vatican Library, after her death. According to her contemporaries she possessed an open mind, a hunger for knowledge and a sensitivity to injustices towards others, and when such occurred, one could always count upon her intervention, and it did not matter whether the issue concerned the Jews living in Rome, abandoned women, mistreated wives, or Protestants who were persecuted in France.

She died in Rome. Her wish was to be buried on the Pantheon, but this did not occur – she is buried in the Vatican Grottos, next to the popes, as one of the three women who were buried there. She is commemorated in St. Peter’s Basilica (San Pietro in Vaticano) by a truly royal monument of Carlo Fontana. 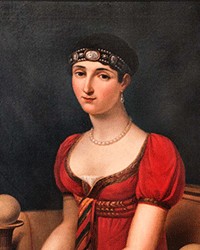 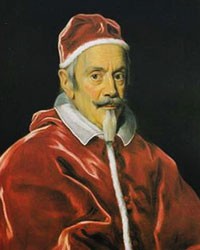