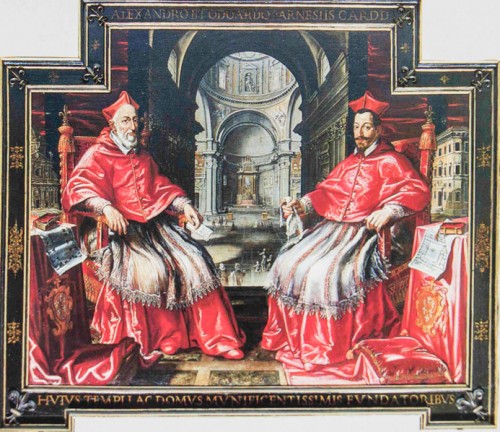 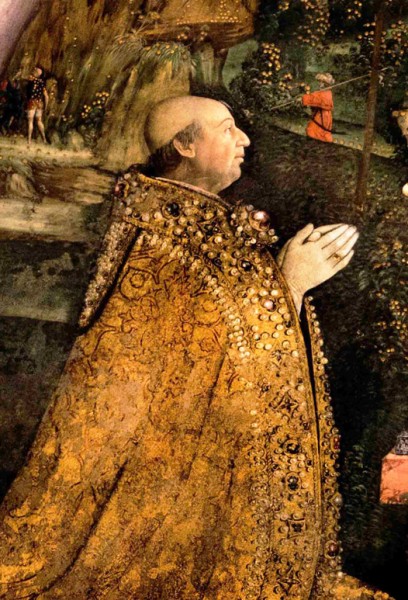 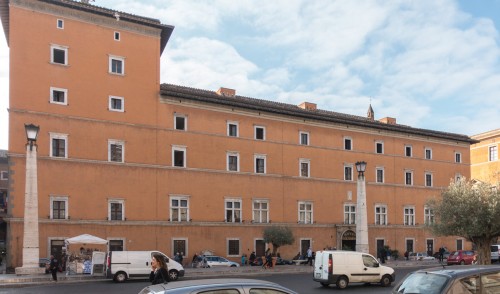 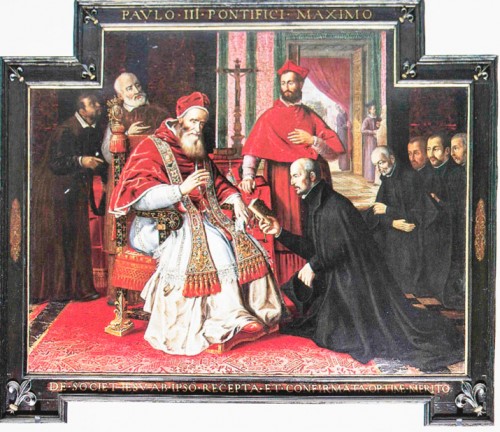 Pope Paul III with Ignatius of Loyola and the Jesuits, in the background Cardinal-Nepot Alessandro Farnese (the pope’s grandson), Old sacristy of church Il Gesù 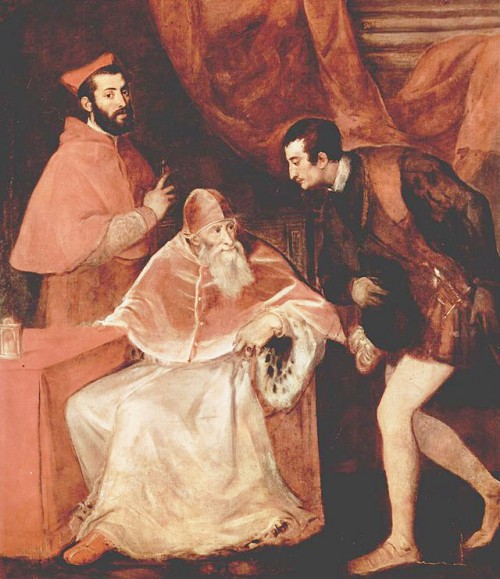 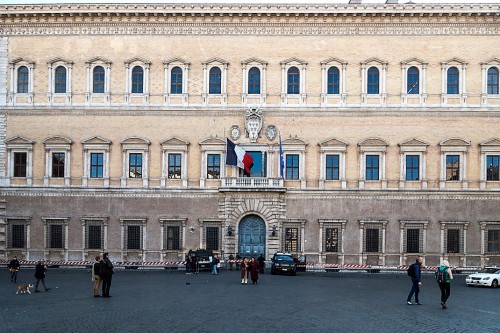 Palazzo Farnese, the palaces belonging to the Farnese family 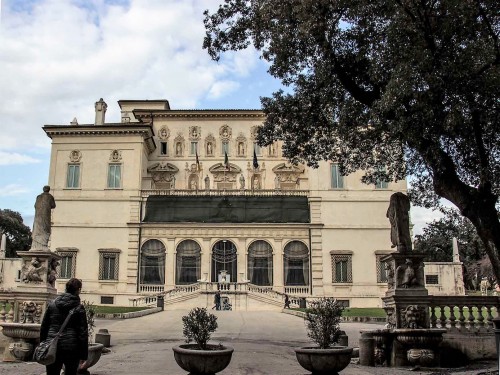 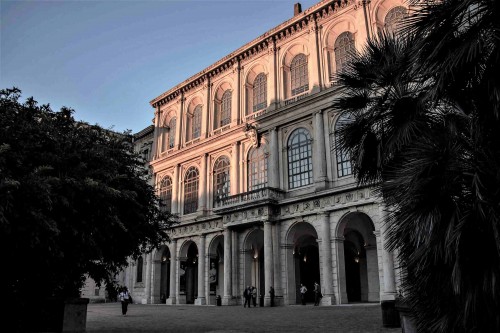 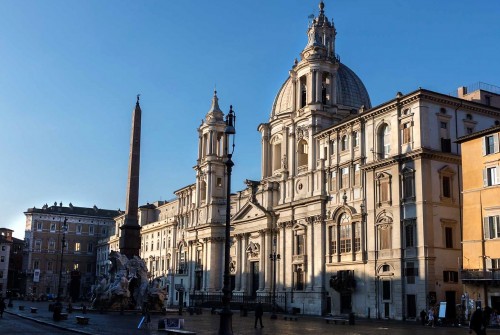 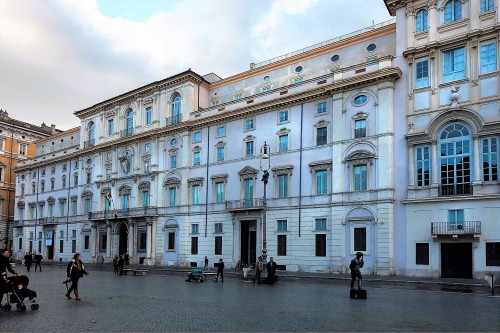 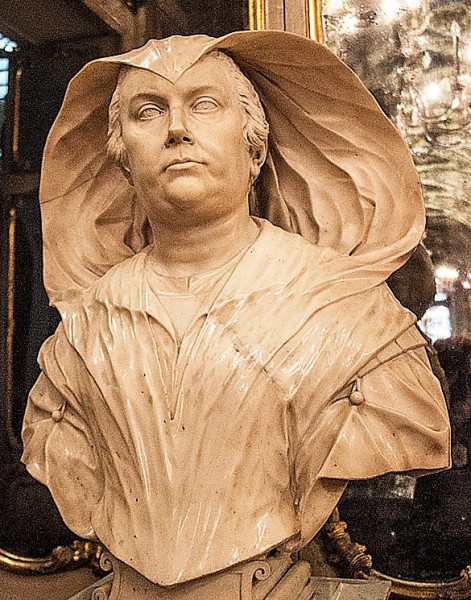 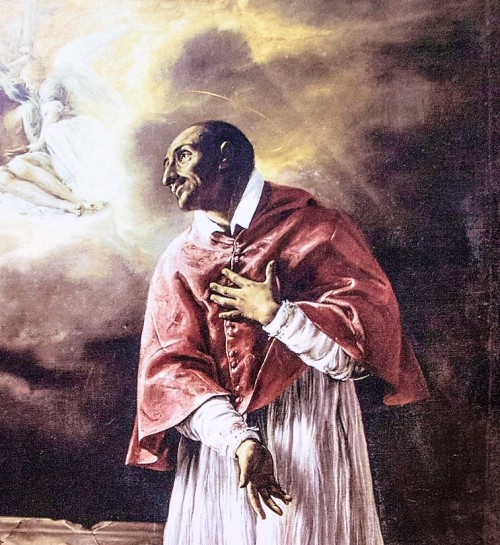 In medieval Latin the word “nepot” meant a relative without an accurate description of family dependencies. And it was during the Middle Ages that the phenomena of nepotism – support of  one’s family – developed in the Catholic Church, while a famous proponent of such an approach was Pope Boniface VIII. However, nepotism did not acquire its expanded form until later. In the XVI century it was grounded by Pope Paul III, while it reached its peak in the XVII century. Later it slowly withered out.

From the moment of the creation of the State of the Church, the pope was the head of the Church, but also a manager of an expanded administrative and political apparatus. After the conclave his relatives (brothers, nephews, sons, grandchildren, cousins, etc.) became sort of members of a royal family – trusted advisors of the ruler of a country. And it was they who held the most important offices and possessed unlimited power until the pope’s death. The functions they served were of church, military (general of the papal army or head of Castle Sant’Angelo) or administrative character. However, all of them were joined by one common trait – multiplication of profits. Even the very significant, as it would seem today, functions of cardinals had the goal to fulfill political and administrative responsibilities and not spiritual ones. That is why nepots, despite having the titles of cardinals, were very seldom ordained. There were also cases (although rare) of nepots resigning from the function of cardinal. That is what Cesare Borgia did – the son of Pope Alexander VI, taking over a post more fit for a man of his ambitions of the general of the papal army, or Camillo Pamphilj, who preferred a prestigious marriage instead.

In time papal nepots became not only well-paid figureheads of the State of the Church, but also the owners of lands granted to them by the pope, out of which they created their own duchies. In addition there were marriages arranged by the pope and beneficial to a given family, which generally were of political and dynastical character. They strengthened the alliances between the Vatican and other rulers, and also prolonged the existence of the family and the surname. Marriages between the pope’s relatives and the representatives of prestigious families in Rome itself, whose founders were generally papal nepots, were also popular. That is how the Roman black aristocracy was created, for the most part related to one another, proud of its surnames, which came from important popes who inaugurated these dynasties (Farnese Borghese Pamphilj, Barberini). However the nepots received apanages not only from the positions they occupied. Additional income was ensured by intercessions (bribes) on the behalf  of the most powerful people of the Catholic world, who desired to reach the pope’s ear for various reasons. The best way to check the pope’s attitude towards an issue was to approach a nepot and act through him. For instance the ambassadors of the two dominant in Europe and rivaling each other factions – French and Spanish – knew that it was possible to take care of most matters through the nepots without disturbing the head of the Holy See with earthly problems. This phenomenon, negative from today’s point of view, did nothing to damage the authority of the pope at that time. It was something normal, recommended even. The pope was safe, surrounded by trusted and devoted people and did not have to occupy himself with earthly issues, because those were left to his relatives.

However, it is often forgotten that nepotism in a decisive way contributed to the development of art and stimulated artistic patronage. It was the responsibility of the pope’s family which was supported and financed during his life to ensure him, after his death (if the pope was unable to do it himself while still alive) with a monumental funerary monument or at least a chapel, which were to commemorate him for all eternity and of course remind all of the significance of the family, of which he was a representative. Moreover, nepots had a tremendous amount of money and a lot of time, while music, the arts, poetry and theatre made their life more pleasant often becoming a veritable passion. Patronage also became an important element of family strategy which had the goal to represent and emphasize the social status of the family. The face of Baroque Rome was shaped by nepots from the Borghese, Ludovisi, Barberini, Pamphilj, and Chigi families. The construction of a monumental palace (or palaces) underlining the prestige of the family, became something obvious at that time, just as the erection of urban or suburban villas which were built with great splendor and decorated with the most outstanding works of art. In this field the leading role was played by Scipione Borghese, the nepot of Pope Paul V and it was he who was imitated by subsequent nepots, building family residences, creating collections of art, granting patronage to artists and even saving ancient art from destruction. Let us recall for example the generous gesture of the aforementioned Scipione, who provided the funds for the construction of the Church of Santa Maria della Vittoria, in exchange for an ancient statue obtained from the monks, of a rather obvious and bold sexual overture – Sleeping Hermaphrodite. And he did all this not to hide it, but to place it in a representative location of his newly created casino (present-day Galleria Borghese), which served solely the purpose of displaying works of art. An equally important aspect was the competition between nepots of former and newly elected popes. They competed for artists, for the most beautiful buildings (including churches) and the most outstanding paintings. There was a reason for Ludovico Ludovisi, the nepot of Pope Gregory XV, building his casino (Casino Ludovisi) and decorating it with magnificent frescoes, just as his predecessor, the aforementioned Scipione Borghese had done (Casino dell’Aurora). Both the nepots of Pope Urban VIII - Francesco Barberini and Antonio Barberini were also significant art patrons.

It should come as no surprise that, nepotism was generally accepted, while reforms attempting to curb it were difficult to carry out since they struck at the very foundations of social relations established over centuries. It was a rare thing indeed among the clergy, but also rulers of the time, to hear a voice desiring a change to this state of things. Certainly, there were those among nepots (although rare) who worried about more than just interests of their own families. An example of this is the rather exceptional figure of cardinal-nepot Charles Borromeo, who thanks to his exemplary life and actions in defense of the poor even became a saint.

Nepotism also had its critics. These were mainly enemies of the papacy – Protestants, but also the Catholics themselves who noticed the discontent of the faithful due to papal supporters overflowing with excess and often behaving inappropriately. Savonarola blasted the family of Pope Alexander VI, while Dante in an unprecedented way in his Divine Comedy, admonished the papal greediness of Boniface VIII and want to elevate his relatives. However, the process of getting rid of nepots was long and truly “painful”. Undoubtedly, the spread of the Reformation contributed to it, which in an indirect way forced a changing of habits and behavior of the Catholic clergy. It was not until the actions of Innocent XII in 1692 that nepotism was curbed, when he announced in a symbolic way that his only family were the poor. He even did not elevate archbishop Taranto to the status of cardinal only because he was his nephew. This does not mean that this procedure  disappeared completely, but it gradually came to an end. And although it existed until contemporary times, it had never again taken on such an extended form as before. 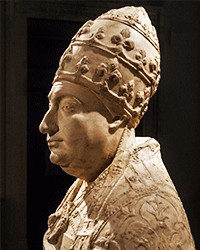