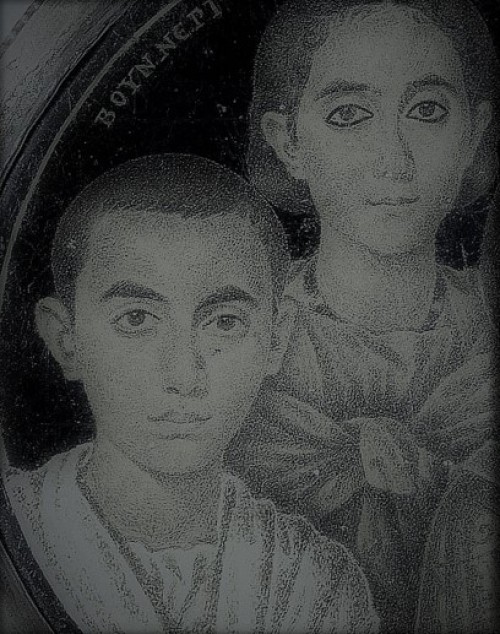 Alleged portrait of Emperor Valentinian II in his youth and of his sister Honoria, pic.Wikipedia 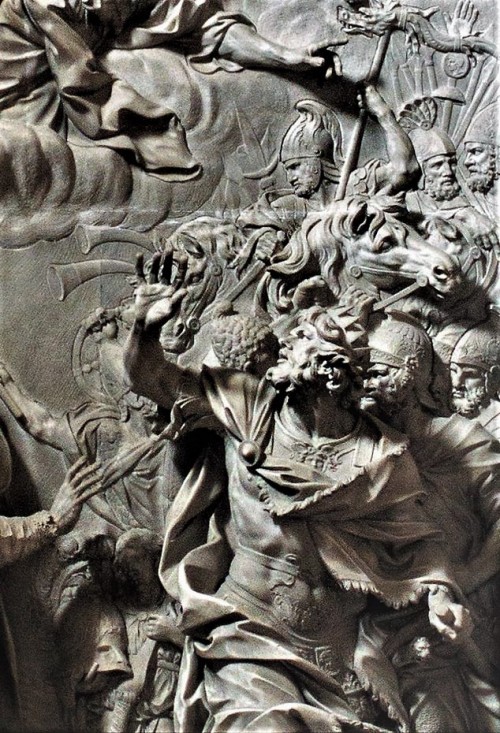 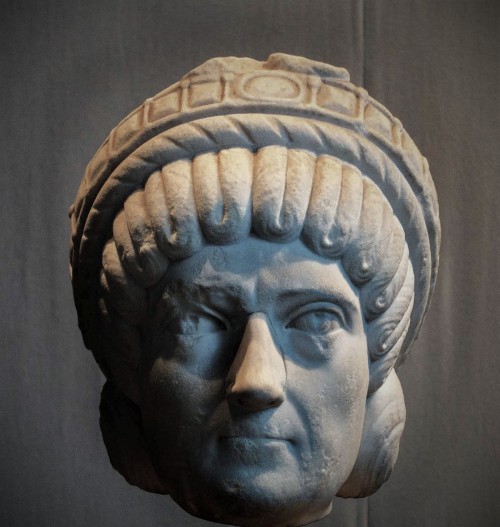 Honoria was born as the first child of Galla Placida and the Roman consul Flavius Constantius (the later co-ruler – Constantius III) and she was less than a year older than her brother, the emperor of the Western Empire, Valentinian III. Her life was by no means simple, as was the case with other high-born girls. They were either, at a very early age destined to marry an important at a given moment ally or relative, or kept vows of chastity, which in the period of increased cult of virginity willingly supported by the Church was not a rarity, also among imperial families of both the Eastern and Western Empire. However, with Honoria, as the sister of a childless emperor the matter was a bit more complicated. Her mother had already lived through a similar situation, as until the moment she was kidnapped by the leader of the Visigoths Alaric, she was kept as a priceless jewel on the side track of dynastic speculations – on one hand everyone feared, that her marriage and children could threaten the ruling at the time, also childless Emperor Honorius, on the other, they hoped that at the moment of his death, which at the time of assassination and courtly intrigues occurred rather frequently, she would be the right card to play in the battle for the throne. Marriage of the imperial sister could have strengthened the dynasty at the moment when an enemy or an ally wanted her hand in marriage, but the consequences of such an act, were at the time of often broken alliances, difficult to predict, that is why it was better to condemn her to life in the monastery, at least until the moment when another alternative materialized. Thus, Honoria was in a state of limbo for many years. We have no information that her life (as was the case with her relatives in Constantinople) was devoted to religion; in fact just the opposite: from rumors which were willingly repeated by the then observers of court life it seems that she had been accused of rather loose morals, which can further be testified to by the fact that she fell in love with the imperial chamberlain Eugenius. When the thirty-year old Honoria became pregnant, Eugenius was killed, while she was (most likely) sent to Constantinople, in order to let the scandal die down. The unruly Honoria’s title of Augusta (co-regent) was taken away   and after her child was done away with (all traces of it vanished), she was supposed to marry an older senator, Herculanus. For Aetius, the most important general and advisor to Emperor Valentinian, who was de facto ruler, the senator’s asset was not only his age, but also his character traits – stability and peaceableness, but most of all lack of political ambitions. However, these traits were not to the liking of Honoria, who with the aid of her courtier sent a letter to the leader of the Huns, Attila, requesting aid and proposing marriage, also sending him a ring. Attila was probably very surprised but he also saw it as an opportunity. His envoys came to Ravenna in order to agree upon the details of dividing the empire between himself and Valentinian III and of the planned weeding. The emperor who was probably just as surprised by these demands, refused to give his consent to such a marriage, while in a letter to the ruler of the Huns, he politely responded that his sister had already been promised to another and has no rights to the imperial throne. The story of this irresponsible act did not end in the execution of Honoria, although the political consequences were more tragic than simply bringing shame upon the pride of the emperor. She was sent back to her mother in Rome, who apparently broke the stubbornness of her daughter, convincing her that marriage to Herculanus is a better alternative than loss of life. The wedding took place in 450 A.D., however Attila, breaking the alliances in place, invaded the lands of the Western Empire in the years 451 and 452, asking for the bride he had been promised.

After the wedding, there is no more news of Honoria. We know that her husband had died in 452, while she probably soon after. It can be assumed that she was not among group of prisoners taken from Rome after the destruction of the city, by another invader, Genseric in 455, as the leader of the Vandals would not have let that fact go unnoticed. Perhaps she had died earlier under unknown circumstances.

However, this story has another side to it. If we asked, who would have benefitted from a marriage between Attila and the imperial daughter – Augusta, other than of course herself, who may have preferred the “wild” Hun to the educated, cultural and predictable senator, we would arrive at the conclusion, that she was not the one who dealt the cards in this game. Some historians believe that, the author of the letter to Attila is to be found at the court in Constantinople. Tired of constant Hun invasions onto his territory and the ever-growing contributions, the Eastern Emperor Theodosius II, could have been one of the suspects. Perhaps he had wanted to direct Attila’s attention towards the West, thus freeing himself from the bothersome enemy, whom he could neither defeat nor assassinate despite numerous attempts. The second suspect was in Rome at that time. The ambitious mother of Emperor Valentinian III, Galla Placida, who had been removed from power, had to look on with anxiety, as her son was continually marginalized by Aetius, whom both she and her daughter hated. Marrying the barbarian Hun, one of the most important allies of Rome, could have almost seemed beneficial to the Western Empire, especially since it would directly weaken Aetius himself, whose strength lay in maintaining the balance in place between Attila and Rome. This is a rather convincing theory, especially since Galla herself had also previously married another barbarian, Ataulf, whose ambition it was to buy himself into the good graces of the emperor by marrying his sister, but also to defend the imperial borders with thousands of Visigoths.

Nevertheless, this story somehow verifies the image of the relations between Rome and the so-called barbarians – the Goths, Huns, Vandals and others who regularly invaded the empire and who were better and better organized. They were treated with contempt and dislike, accused of lack of rationality, which resulted from their lack of knowledge of philosophy, ancient literature, lack of laws which guaranteed social order, meaning all that which at the time constituted a civilization. Yet despite their vices – violence, promiscuity (polygamy), and different behavior, which was pointed out, in time they became partners who had to be considered, and as it seems they were no longer so wild as to not warrant marriage. And while Honoria’s mother, Galla Placida was kidnapped by one of them, her daughter consciously chose Attila, while Galla’s granddaughter, Eudoxia was officially married off by her father Valentinian III to the king of the Vandals, Genseric. 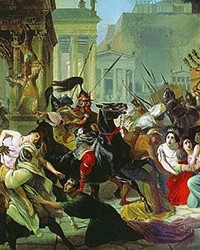