Galla Placidia (390–450) – an exceptional woman, worth as much as several tons of grain 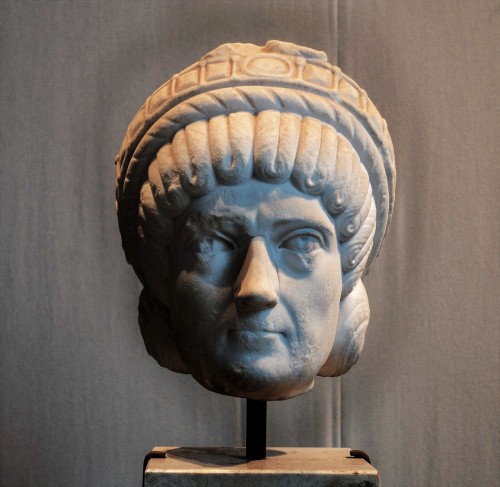 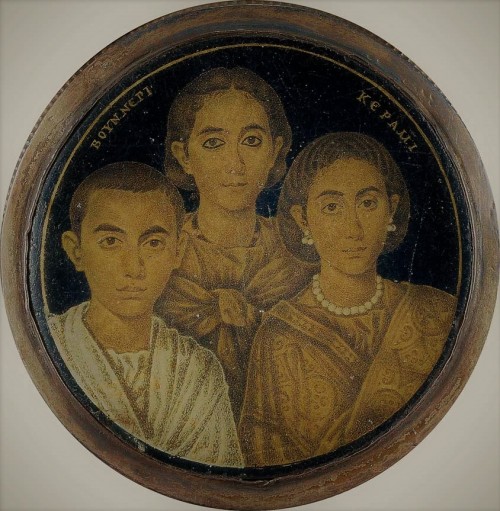 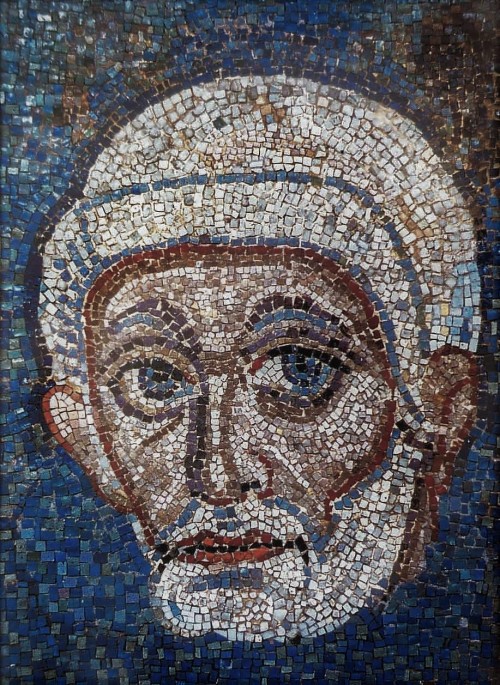 Remains of a mosaic in the triumphal arch of the Basilica of San Paolo fuori le mura, Head of St. Peter, Vatican Grottoes 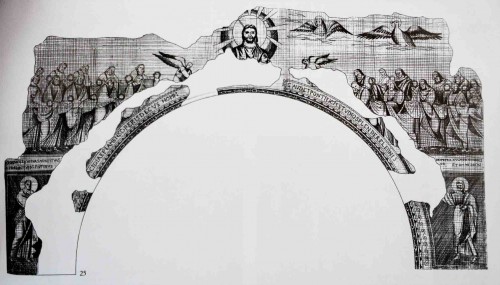 Mosaics in the triumphal arch in the Basilica of San Paolo fuori le mura, unpreserved, reconstruction according to H. Brandenburg

Before Emperor Theodosius died in 395 A.D., at the age of 48 years old, he divided his empire into two parts. The eastern was given to the older son Arcadius, while the western to Honorius. The latter, as well as the emperor’s daughter Galla Placida were cared for by his trusted advisor. - and the head of the army of the Roman Empire – Stilicho. The eleven-year old Emperor Honorius and his five-year old sister initially settled in Milan, then starting in 402 A.D – due to threats of Gothic invasions – in Ravenna, a little-known town, which benefitted from its location. The town was surrounded on three sides by the sea and on the fourth by swamps. The life of Gallia Placida concentrated on, as was fit for an imperial daughter and sister, prayers, handiwork (weaving), as well as waiting for the appropriate, from the political point of view most beneficial, candidate for marriage. The actual ruler and one who held sway in the empire was Stilicho, who himself was not free from his own dynastic ambitions.

As a twenty-year old woman, Galla still remained unmarried, since in the calculations of Stilicho the appropriate place for her had not been found and it was still unknown what should be done with her, especially due to the fact that the political situation was unfavorable. The empire struggled with Visigoth invasions under the leadership of Alaric, while financial problems complicated the already dire situation even further. The consequences of this were a threat to Rome, first its siege, then in 410 its sack. In this unfortunate time, Galla Placida resided in the city on the Tiber. Chroniclers of the time also attribute to her a rather cruel act. When her cousin, Serena, the wife of Stilicho, who was murdered two years prior, was accused by the Roman Senate of favoring Alaric and causing the gates to be open for his armies, when asked about her opinion, Galla Placida did not grant mercy, and did not speak on the behalf of her relative, thus sentencing her to death by strangulation.

She along with other prisoners, together with tens of carriages filled with treasures stolen from Rome, was taken out of the city by Alaric’s forces and along with them first went south, then north. The Visigoth leader, counted on Galla being an important trading card in talks with the emperor of the West which would force him into concessions on behalf of the Visigoths, whose main aim was to acquire grain and land on which they could settle. This however, did not come to pass. For the next six years Galla Placida wandered with Visigoth armies from place to place. When, after Alaric’s death, the Visigoths found themselves under the leadership of Ataulf, he not even being able to get a decent ransom for her, decided to marry her in this way becoming the brother-in-law of Emperor Honorius himself. The report from the wedding ceremony written down by a diplomat from the Eastern Empire, Olympiodorus of Thebes remains until this very day. In it he describes the gifts which Ataulf bestowed upon his wife, meaning trays with treasures stolen four years earlier in Rome, carried by fifty young men, as well as the groom, well-built and handsome, dressed in a cloak of a Roman general.

Neither the wedding, nor even the birth of the son of Gallia and Ataulf, who was named Theodosius in honor of his grandfather the emperor, changed the predicament of Galla herself. When the newborn died, and then Ataulf was murdered, her situation seemed hopeless. The next king had once again desired to exchange her for something that was valuable to the Visigoths, meaning a supply of grain, to which the court in Ravenna finally agreed. In this way in exchange for 600 thousand modii (1 modius = 8.7 liters) of wheat (according to Peter Heather), Galla regained her freedom.

When she returned to her family, she or more appropriately her important status, in face of the childless Emperor Honorius, drew the interests of the head of the Western army – Flavius Constantius, whom Galla married against her wishes in 417. As was reported by an observer of this even, Photios: “Emperor Honorius, Placida’s brother took her by the hand and against her will put it into the palm of Constantius, after which a truly magnificent wedding took place”. Galla’s lack of enthusiasm should not be surprising, as according to a description her future husband was a “grim and somber man with bulging eyes, a long neck and broad head”. In an attempt to erase all memories of the last years which she had spent at the side of a barbarian Arian (Arianism) Galla became a devout defender of orthodoxy and a founder of numerous sacral structures. She corresponded with the bishop of Hippo, the later St. Augustine, was engaged in the election of the pope in Rome, and even participated in a council called in Ravenna. The bishop of Ravenna praised her as a mother of Christians and compared her imperial position of – mother, wife and daughter to the Holy Trinity. Her significance in the court increased when she gave birth to a son Valentinian, while she herself was elevated to the prestigious role of Augusta. In 421 she also became the wife of co-emperor after her brother had elevated Constantius to such status in recognition of his military achievements. The death of her husband did nothing to weaken Galla’s position, however it did provide her with more enemies. As Olympiodorus of Thebes reports, “the affection of Honorius towards his sister grew so great after the death of her husband, that their immoderate pleasure in each other and their constant kissing on the mouth caused many people to entertain shameful suspicions about them…”. We do not know, to what extent Galla was driven by sisterly feelings and if there was anything else besides them, but undoubtedly she had to try and maintain good relations with her brother, in face of the problem of succession, which she faced along with her son Velentinian. Perhaps she counted on her childless brother anointing his nephew as a successor to the throne in the event of his death, however, this did not come to pass. The expressive relations between the siblings were soon transformed into dislike, Galla lost her title of Augusta and was once again forced to embark on a journey, this time to Constantinople, where she was sent with Valentinian and her daughter Honoria, as if into exile. As it turned out it was not too long, as in the same year, news reached the city on the Bosporus of her brother’s death.

Galla could feel satisfied, when two years later in Rome, her six-year old son Velentinian III was named August of the Western Empire, while she took the place of regent at his side. The situation of the state which they were to jointly rule was by no means simple. The financial condition, due to losing provinces in Africa, Britain and Gaul was worse than bad. Galla also had to maneuver among ambitious leaders who were eager to do battle as well as to extent their influence. She succeeded until the moment, when the place of grey eminence in the court in Ravenna was taken over by Aetius, gradually overshadowing the imperial mother. When Valentinian III came of age, she also had to witness how he was marginalized by Aetius and made to play the role of a figurehead. However, the marriage of her son with the daughter of the emperor of the Eastern Empire, Licinia Eudoxia provided some kind of dynastic stability.

Galla spent most of her time in the more and more architecturally inferior, but already Christian Rome. And she would have probably lived until a ripe old age if it had not been for her daughter. The no longer young, thirty-year old, but feisty Honoria first bore a child out of wedlock and then incited a true political conflict, offering her hand in marriage to the ruler of the Huns, which resulted in Attila entering Italy, since he was convinced or at least pretended to be that Honoria desired to be his wife. The bad reputation of the daughter also left a mark on Galla: she – “the mother of Christians”, who wanted to follow in the footsteps of Helena (the mother of Constantine the Great), who was already considered a saint, had to endure rumors of a weakness of both the mother and the daughter towards “wildlings”, whom the Romans treated unequivocally as uncouth barbarians, with no education, culture or manners. Galla lived to see the wedding of her discredited daughter, with a husband who was forced upon her, just as one had been forced upon the mother. She died in the same year of 450 A.D. We cannot even be certain where she was buried. Most likely along with her first son, whose sarcophagus was at that time brought to Rome from Barcelona, she was laid to rest in the so-called Mausoleum of Honorius, found by St. Peter’s Basilica (San Pietro in Vaticano), in a location which was later occupied by the Chapel of St. Petronella.

Galla was a significant funder of sacra buildings in Ravenna. She also left her mark on Rome: 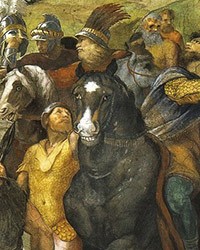