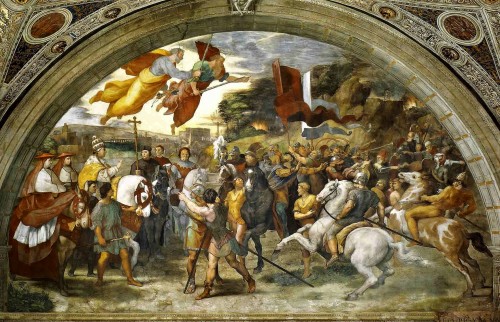 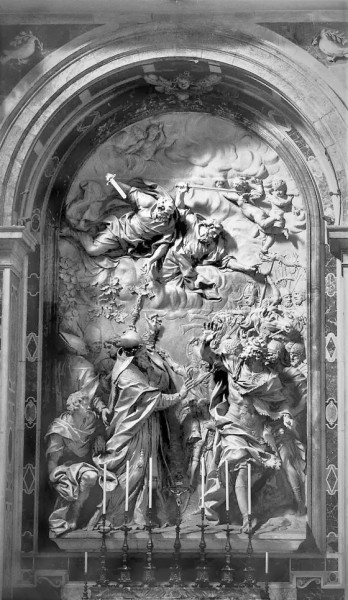 Meeting of Pope Leo I and Attila, Alessandro Algardi, Basilica of San Pietro in Vaticano 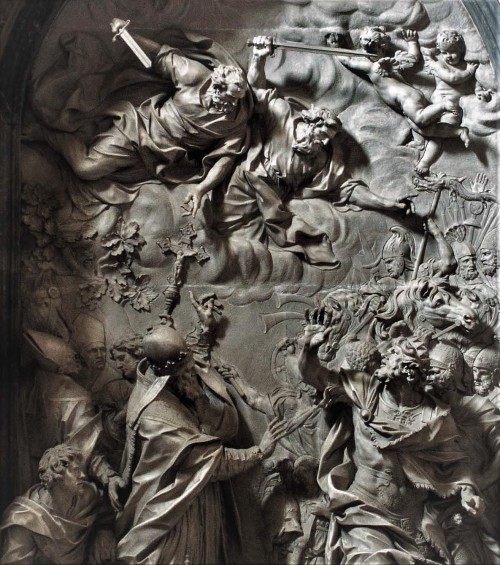 Pope Leo I negotiating with Attila, supported by SS Peter and Paul, fragment of an altar, Alessandro Algardi, Basilica of San Pietro in Vaticano 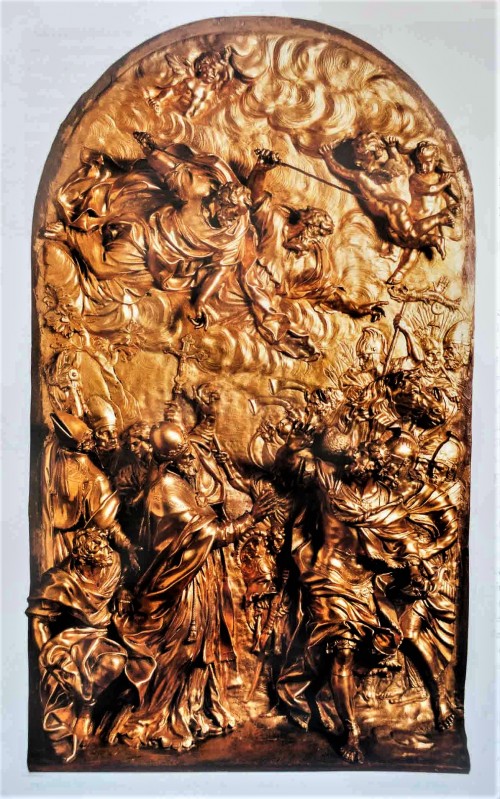 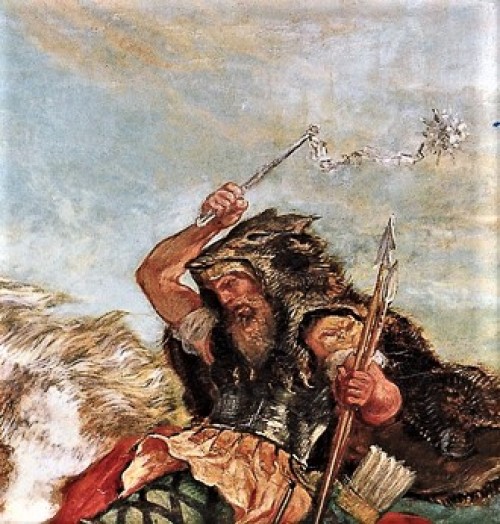 Meeting of Pope Leo I with Attila, Chronicon Pictum, around 1360, pic.Wikipedia

Fear gripped Emperor Velentinian III and the inhabitants of the Western Empire, when the recently defeated and seemingly only licking his wounds, famous chieftain of the Huns, once again appeared at the northern border of the empire in 452 A.D. And this time he desired loot and his fearless troops, razing the cities found along the way, directed their steps towards Rome. When Pope Leo I appeared before him asking for the city to be spared, Attila agreed to his proposal, retreating from Italy. In this way, according to a legend, the invasion of a barbarian horde was stopped, which inhabitants of Rome welcomed with joy, while the Church proclaimed it a miracle, in which two saints participated – Peter and Paul.

Fear gripped Emperor Velentinian III and the inhabitants of the Western Empire, when the recently defeated and seemingly only licking his wounds, famous chieftain of the Huns, once again appeared at the northern border of the empire in 452 A.D. And this time he desired loot and his fearless troops, razing the cities found along the way, directed their steps towards Rome. When Pope Leo I appeared before him asking for the city to be spared, Attila agreed to his proposal, retreating from Italy. In this way, according to a legend, the invasion of a barbarian horde was stopped, which inhabitants of Rome welcomed with joy, while the Church proclaimed it a miracle, in which two saints participated – Peter and Paul.

The reign and fame of Attila lasted only two decades, however we remember his exploits until the present. The invasion of the nomadic Huns is identified with unprecedented brutality, determination and greed, but most of all fear which they inspired in the civilized and more and more uncertain of what tomorrow will bring Romans. How did it come about, that the one who initially had perfectly fit into the defensive scheme of the empire, suddenly became its worst enemy? In order to understand this we must backtrack in time to Rua, the predecessor and uncle of Attila.

In the thirties of the V century the Huns, of whom he was the leader, conquered the tribes of the so-called Barbaricum, meaning lands found outside the borders of the Roman limes. Establishing order in the area, from which the lands of the empire were constantly attacked and refugees entered, was in the interest of both the emperors of the Western and Eastern Empire, that is why military alliances were often established with Attila, he was paid a tribute in exchange for assurances that the Huns would keep other tribes in check and would stop from invading imperial lands. Despite the fact that in the view of the Romans such an alliance was not ideal, since paying tribute to somebody they considered a barbarian, compromised the pride and treasury of the emperor, it was nevertheless beneficial for both parties – it guaranteed peace, while giving the Huns a freehand in their conquests. The constant expansion of the Huns who settled on the territories of present-day Hungary was the very essence and right of their being, while the spoils and tributes were the only way of acquiring means of living. Their lack caused destabilization of the rule of the leader, who was threatened with mutiny of the Huns themselves, but most of all of tribes which were conquered previously, such as the Scirii, Goths, Gepids, or Sarmatians. The Romans, on their part, respected the Huns due to their outstanding military skill. Their advantage was a rapidly moving cavalry, warriors being able to shoot in full gallop, clever apparent retreats, but most of all bravery and determination. In this way Rua shoulder to shoulder with the Roman general Aetius defeated the Burgundians and fought against the Visigoths. After his death in 434, the reign over the Huns and their allies was assumed by two brothers Bleda and Attila, continuing the policy of cooperation paid for by annual tributes from the Romans.

In exchange for 700 pounds of gold annually, the emperor residing in Constantinople could count on peace and a stable situation within his borders. It lasted as long as the tribute was paid on time, however when the emperor stalled with the payment, Attila and Bleda invaded the lands of the Eastern Empire (at the turn of the years 441 and 442), looting and destroying numerous cities. For the ruler of the West, Emperor Valentinian III, this situation was even beneficial, since it diverted the attention of the Huns from his lands. If that was not enough in the year 449 Attila who in the meantime got rid of his brother, killing him during a hunt, received the honorary title of leader of the army from Valentinian. However, it was to turn out, that the Roman-Hun alliance was short-lived.

In 449 Attila entered the territory of the Western Empire. As pretext, he used the refusal of Emperor Valentinian III, to give him the hand of his sister Honoria in marriage, which she had proposed herself, albeit without the consent of her brother. We could say, what a shameful proposal, however Attila did not consider himself an unworthy partner. As some Roman writers stated, his behavior in relation to Roman delegations, which he hosted in his wooden, yet lavish palace, was pleasant and amicable, while his role of the protector of Roman interests – significant. His closest advisors were Romans, for example the Pannonian, Orestes, who served Attila in diplomatic missions – and who as it turned out later would be the father of the last emperor of the Western Empire (Romulus Augustulus). Nevertheless, in most of the Romans, Attila and his men inspired fear and aversion, even disgust, of which an example is provided by the words of the then chronicler Ammianus Marcellinus, who aloofly wrote about the Huns: “They all have, so that you might fancy them two-legged beasts, or the stout figures which are closely knit and strong limbs and plump necks; they are of great size, and low legged hewn out in a rude manner with an ax on the posts at the end of bridges.  They neither require fire nor well flavored food, but live on the roots of such herbs as they get in the fields, or on the half-raw flesh of any animal, which they merely warm rapidly by placing it between their own thighs and the backs of their horses”.

Two years later, in 451 Attila was defeated in Gaul, on the Catalunian Plains, by his former ally – Aetius. The Huns could have been thoroughly beaten, however the clever Roman general did not want their total annihilation due to their aforementioned stabilizing role in relation to other Germanic tribes. Attila however, did not resign from further conquests within the borders of the empire, sacking such cities as Aquileia, Bergamo, Padua, and Verona. And here is where fact becomes a legend, of which I spoke at the beginning. According to it, Pope Leo I, halted the Huns march on Rome. Sources of the time however, say that Attila met the delegation of the emperor of the Western Empire in Northern Italy on the river of Mincio. Most likely, he received the appropriate payment and resigned from further advances, especially since his armies suffered from hunger and were decimated by epidemics. Quickly thereafter he died, but we do not know how. Some believe that he was murdered by his Gepidian wife on his wedding night, others, unfavorable towards Attila claim that he drunk himself to death, still others that the reason was a hemorrhage. When the Huns were no longer a threat, the situation on the northeast borders of the Roman Empire underwent complete destabilization.

There remains an illustration of the funerary proceedings organized in Attila’s honor. Under a tent in the open field, his body was set out for all to see. Selected riders circled it in gallop, singing funerary songs. After his death, the allied until then tribes of Gepids, crushed the Huns, while their remains fled to the east, never to be heard from again.

Surprisingly, the memory of the barbarian Attila has survived for centuries. His name appears in many medieval works and not necessarily in a negative light. A testimony of that is provided by old French, Spanish, Hungarian, but most of all Germanic sagas. Dante Alighieri placed him in his Divine Comedy in the seventh circle of hell, not the worst one, since Pope Boniface VIII was placed in the eight circle.

The meeting of Leo I and Attila became one of the most often presented topics in European literature and art. At the beginning of the XVI century Pope Leo X honored his namesake, by entrusting Raphael with the creation of paintings in the apartments of the Apostolic Palace, depicting this great event and referring directly to contemporary times, meaning the barbarian Reformation which was rearing its ugly head in the north of Europe. The fresco shows Pope Leo I, savior and miracle-worker (with the facial features of Leo X), defeating evil, meaning the hordes of Huns invading from the north. In the XVII century the topic of the miracle of Leo I once again appeared in Roman art. The renowned Baroque artist Alessandro Algardi created in the Vatican Basilica (San Pietro in Vaticano), a work, this time a sculpture, adorning the final resting place of Leo I, reminding all the faithful, who felt fear in face of the growing strength of the Reformation, about the miracle of the pope from the V century.

In more contemporary times, recalling the name of  the fearless leader of the Huns, opened the gates of Venice to Napoleon Bonaparte in 1796, after the famous tirade in which he warned the inhabitants of the city on the Lagoon, that he will be just as merciless as Attila towards Venice.

The figure of the leader of the Huns, still seems a never-ending source of ideas and interpretations. Here, we can mention films created in 1954 – Sign of the Pagan   and Attila, in the second of which the role of Honoria was played by the divine Sophia Loren, or perhaps more contemporary pictures – Attila   (2001), as well as computer games and books bordering on fantasy and documentary.