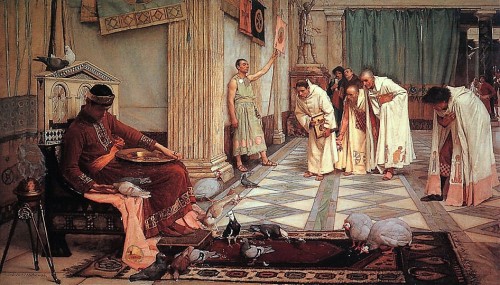 Honorius receiving the news of the sack of Rome by Alaric, John W. Waterhouse, pic. Wikipedia 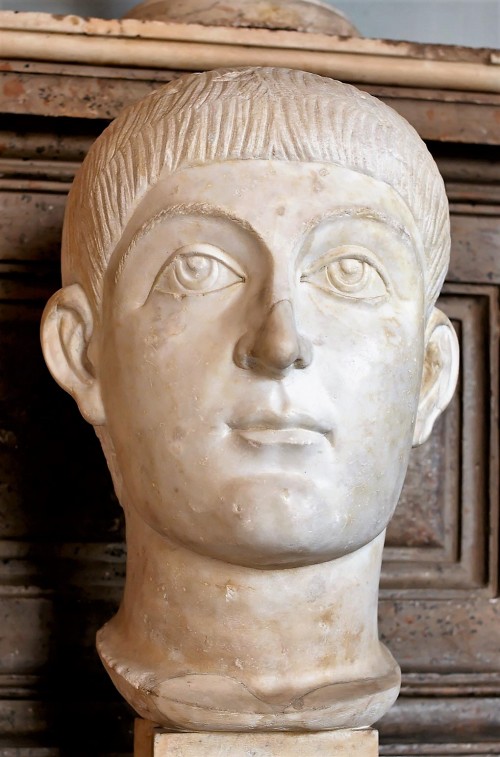 However, his contribution was grounding Christianity in the area of the Western Empire which he ruled. In this way he continued the religious policies of his father, Emperor Theodosius I, who by the edicts he issued elevated Christianity to de facto status of state religion.

But let us start at the beginning. Prior to his death Theodosius I divided his great empire into two parts – he gave the Western Empire to his younger son Honorius, while the Eastern was to be ruled by the older son – Arcadius. At the moment of his father’s death Honorius was ten years old and that is why Theodosius appointed, as his guardian, his advisor and trusted general, as well as his relative – Stilicho, who had Vandal roots. Three years later the young Honorius married his daughter Maria. However, neither this marriage, nor the following, after his wife’s premature death, with her sister Thermantia brought about the expected offspring.

The brothers Honorius and Arcadius jointly issued decrees that were enforced throughout the empire and conducted joint policies. However, there were also armed conflicts between them as well as rivalries, which were often aided by the confederates, meaning the Visigoths, who were very effective in these kinds of games. Stilicho himself, despite the fact that he enjoyed a thoroughly deserved reputation of a talented leader and diplomat and exhibited loyalty towards the emperor, was also disliked. His strong position as the grey eminence and the actual leader of the state did not appeal to everyone. He was murdered in the year 408 with Honorius’s blessing and the emperor ruled alone. Stilicho’s daughter was divorced, removed from the court and completed her life as a nun.

We already know the consequences of Honorius’s independent rule – the pillage of Rome, as well as the kidnapping of the emperor’s step-sister, Galla Placida, who was staying in Rome at that time. She would not return to the family until many years later and then become the wife of another leader, whom Honorius pushed to be a general and an advisor – Constantius. The marriage of Galla and Constantius was conducted in 417 and had great significance since Honorius still had not fathered any children.

The emperor resided in Ravenna, which was surrounded by the sea and swamps, and since 402 A.D., was the residence of the emperors, but he did stay in Rome from time to time. And it was not only about showing the proper respect to the senators and a pilgrimage to St. Peter’s Basilica, which was a necessary act of the imperial presence. In 403, he entered the city, following a victory (temporary) over the Visigoths. This was an important moment, since the last such triumphant entry took place one hundered years earlier. Throngs of Romans gathered on the streets to greet the emperor entering through Milvian Bridge (Ponte Milvio) and cheering looked on as he rode towards Capitoline Hill and later to Palatine Hill, the traditional, deserted residence of Roman rulers. In order to commemorate his victory, the emperor even organized gladiator fights in the Colosseum, chariot races and the still allowed and greatly popular animal hunting, meaning slaughtering the helpless creatures for all to see.

The emperor’s claim to fame was the Basilica of St. Paul Outside the Walls (San Paolo fuori le mura), of which the construction had been going on for many years and which was finally finished thanks to the financial support of the Theodosian dynasty. It was not only larger than the one funded by the Constantine dynasty (San Pietro in Vaticano), but it also seemed more beautiful. Nevertheless, it is on Vatican Hill – next to St. Peter’s Basilica, traditionally considered to be the most important – that emperor created, next to the transept, a mausoleum for his family. All traces of it were lost, when in the VIII century the Chapel of St. Petronella was built in its place.

What did Rome look like at the time?   A visitor was probably under the impression that he is still in a pagan city. There were no significant churches in the center – these were found on the outskirts. The spirit of antiquity was still prevalent here, monuments and ancient sculptures and heroes were visible everywhere, while the closed down temples were not yet in ruin. Let us remind ourselves that in 407 Honorius ordered all riches accumulated by pagan priests (after the temples were shut down) to be handed over for the needs of the army and dignitaries of the Roman Catholic Church, while the structures themselves would be given up for public use, which basically meant their slow deterioration. However, the city was still imposing. This did not change, even after the brutal three-day looting of Alaric during which it was the pride of the Romans which suffered more. Only a year after this invasion, the emperor once again showed up in the city on the Tiber, wanting to erase the traces of humiliation, while his entry was so grand that it would seem he was entering not a fallen city but a victorious one. However, the pillage of Rome did not add to the emperor’s popularity and did not provide glory for this position, especially since the Romans were aware of the fact that the reason for their plight was the unskillfully conducted negotiations between the emperor and the leader of the Visigoths. He was also blamed for another reason. The city had lost its old gods-protectors. Even those Romans who had already converted to Christianity, had to be deeply disappointed that their new God allowed such dishonor.

After a 28-year long reign, Emperor Honorius died at the age of 39. His body was brought to Rome and laid to rest in the aforementioned mausoleum. However the empire had no successor. In order to find one a civil war erupted, which ended with another child assuming the throne – the emperor’s nephew, Valentinian III.