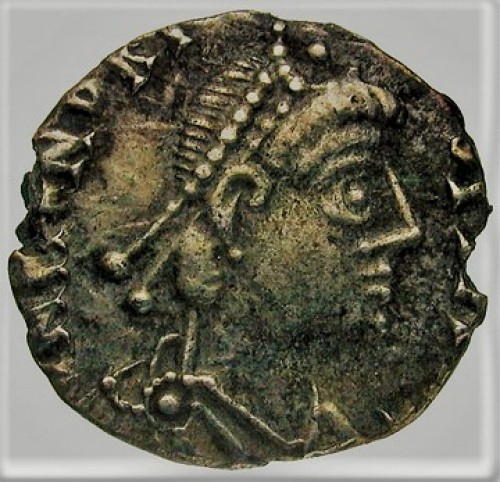 Coin with the image of Genseric, pic. Wikipedia 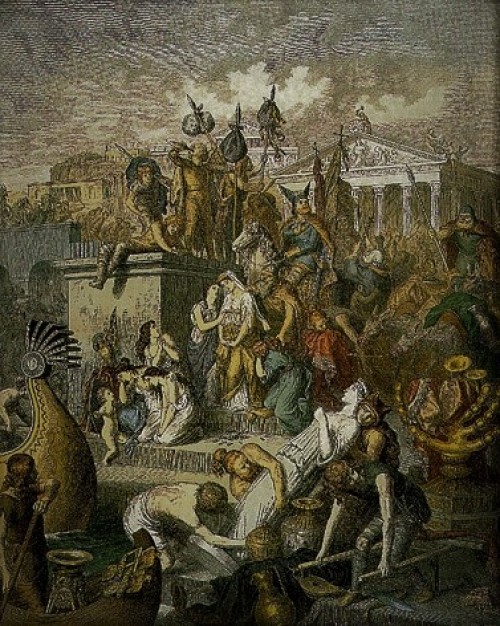 Infamous for being either a cunning ally, or an enemy of the Roman Empire, the ruler of the Vandals and Alans, Genseric, in June of 455 landed at the mouth of the Tiber and began his march towards Rome. Nobody stopped him, the city gates were wide open, while on an empty street, surrounded by the clergy, only  Pope Leo I awaited him – who as legend would have it had once before lived through a similar encounter, saving the Eternal City from being plundered by the leader of the Huns, Attila.

Infamous for being either a cunning ally, or an enemy of the Roman Empire, the ruler of the Vandals and Alans, Genseric, in June of 455 landed at the mouth of the Tiber and began his march towards Rome. Nobody stopped him, the city gates were wide open, while on an empty street, surrounded by the clergy, only  Pope Leo I awaited him – who as legend would have it had once before lived through a similar encounter, saving the Eternal City from being plundered by the leader of the Huns, Attila.

And this time Leo was once again successful in convincing the loot-thirsty king to not burn and destroy the city. Unfortunately, for the promise of leaving the inhabitants alive, neglecting to rape and spill blood, he agreed to the city’s looting. The invaders had two weeks to have their fill and steal to their heart’s content, all witnessed by the terrified citizens of the city, of course those who had not left the city earlier out of fear. Public areas were stripped of everything which seemed valuable to the Vandals, all temples and churches fell victim to them, including the Temple of Jupiter with its gilded roof, imperial palaces on Palatine Hill, statues, gilded bronzes, liturgical accessories from Christian churches, even the Jewish treasures once brought by Emperor Titus, from Jerusalem which was destroyed by the Romans. Carriages filled with treasures left the city gates and went to the harbor, where they were placed on ships going to Carthage in Africa in the past the richest province of the Roman Empire, known as its granary, which provided not only grain but also the highest revenue from taxes. Genseric subdued it in 439, and came to Italy not to plunder Rome, or let us say that was not his main reason. Let us remind ourselves that at the time he was an ally of Emperor Valentinian III, from whom he had received lands in present-day Tunisia as well as Eastern Algeria, and on top of that a promise without precedent – the hand of the emperor’s daughter Eudoxia (upon her coming of age) for his son Huneric, which was to seal for eternity the friendship between the king of the Vandals and emperor of the Western Empire. In exchange Genseric had promised not to attack and plunder Italy and Sicily. However, after the assassination of Valentinian, killed by the men of the senator and prefect of Rome Petronius Maximus, and his ascension upon the throne of the Western Empire, the usurper’s first move, which was to sanction this brutal act was his won marriage with the emperor’s widow Licinia Eudoxia while his son married her daughter Placidia. Despite the fact that there is no source confirming this information, reportedly it was Licinia Eudoxia herself who requested the Vandals’ aid. Nevertheless, this series of events was a pretext for a rapid, armed intervention of Genseric, who appeared in the blink of an eye as the de facto avenger of emperor Valentinian III, asking for the fiancée who had been promised to his son. The unfortunate usurper died while fleeing the city. When the news of the oncoming Vandals had reached the inhabitants of Rome, seeing the reason for this invasion in Petronius, they literally ripped him to shreds, casting his body into the Tiber. Having dealt with the emperor in this rather uncivilized way, they awaited Genseric – a Christian (Arianism), who was described by his contemporary Roman historian and chronicler Jordanes in the following way: “Of medium height, lame from a fall off his horse, he had a deep mind and was sparing of speech, hated luxury, was covetous, and had an uncontrollable temper. He was far-sighted in inducing foreign peoples to act in his interests and resourceful in sowing seeds of discord and stirring up hatred”.

Leaving the city, after the pillage, the Vandals took with them Empress Licinia Eudoxia as well as the imperial daughters Eudoxia and Placidia. Eudoxia was married off, as was previously planned, to Huneric, while the remaining two women were sent back to Constantinople  a few years later (462/463), after the Theodosian dynasty came to an end. Those citizens of Rome who were knowledgeable in construction and accounting also became prisoners of war – they were needed by Genseric in his new kingdom in Africa.

The following was the result of the pillaging: structures, although robbed of all valuables were spared, while the inhabitants – at least those who did not resist – were kept alive. However, Roman pride and self-confidence suffered, since faith in the future of the city and the emperor was left in shambles. Once again, barbarian hordes, since that his how Romans perceived the Vandals, entered the city and once again in the same century it had to pay heavily for its life and survival. It should come as no surprise that Pope Leo I, had the gratitude of the city inhabitants, since it was he and later his successors that undertook the task of caring for their interests.

These events led to a wave of emigration into Constantinople – mainly of the significant and wealthy families, but not only. The numbers speak for themselves. While at the beginning of the V century, Rome had a population of approximately 800 thousand, by the end of this century there were only 100 thousand people left. The city slowly deteriorated. Temples of the so-called pagan cults came to ruin   and despite the fact that their looting was forbidden, in 459 a decree was issued based on which, structures which were deemed irreparable could be torn down – which meant a universal approval of looting. Thus city descended towards its downfall, before the Western Empire itself finally collapsed.

The well-known and still in use today term vandalism, meaning the brutal and thoughtless destruction, surprisingly came about, not in ancient Rome but during the times of the French Revolution, when it was used by a certain bishop (Henri Grégoire), who in 1793 referred to the actions of the Republican army as vandalism, as it destroyed churches and works of sacral art. It would seem that this terminology is unjust – in comparison with what was going on in France, the actions of Genseric must be deemed much more civilized, and moreover the aim there was not to destroy but to pillage and so they are more comparable to the actions of the national hero of the French, Napoleon Bonaparte, whose planned looting of conquered nations was part of his cultural policy.