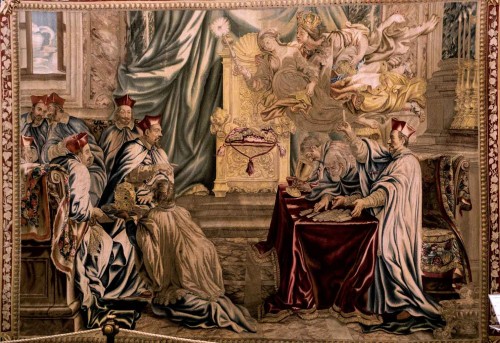 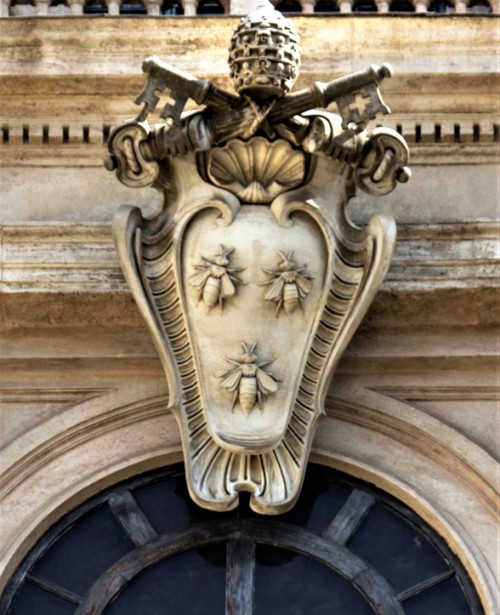 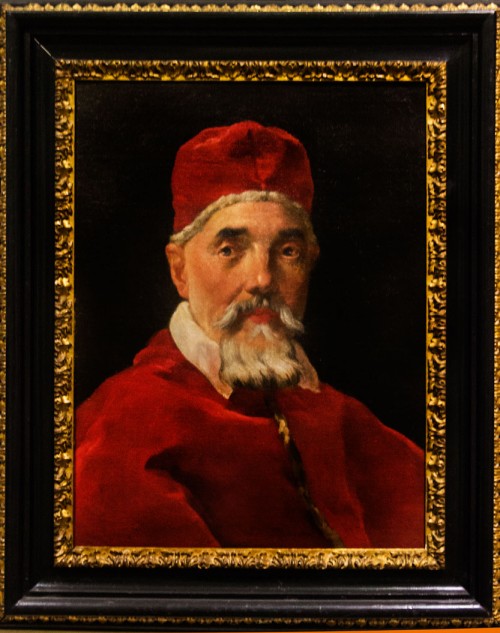 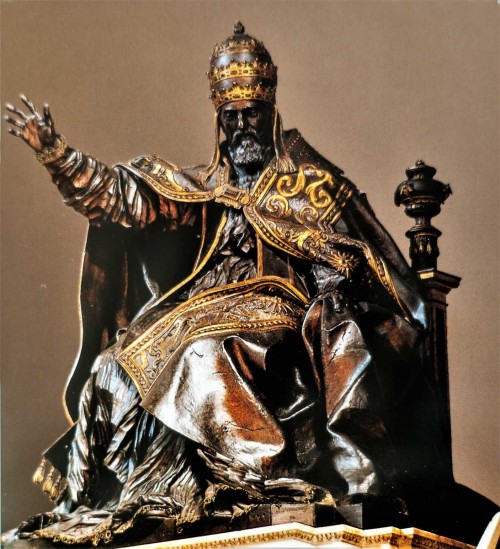 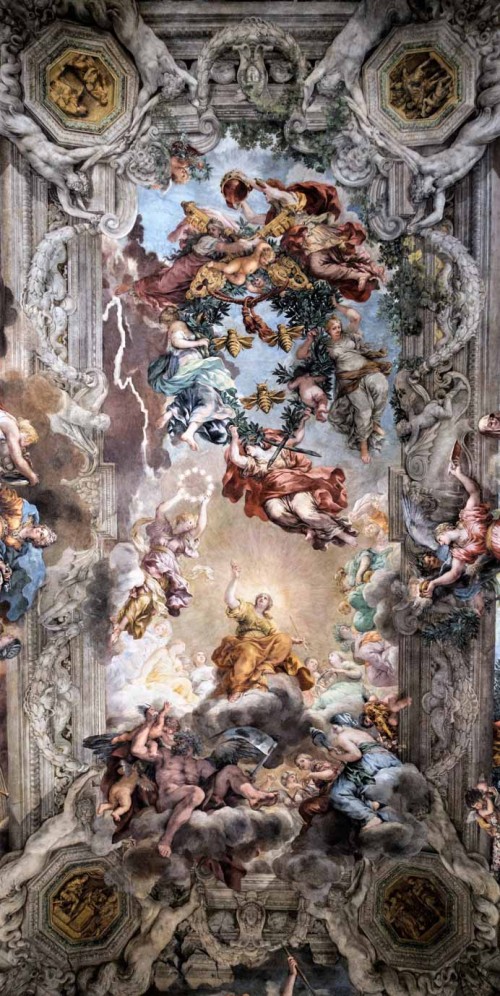 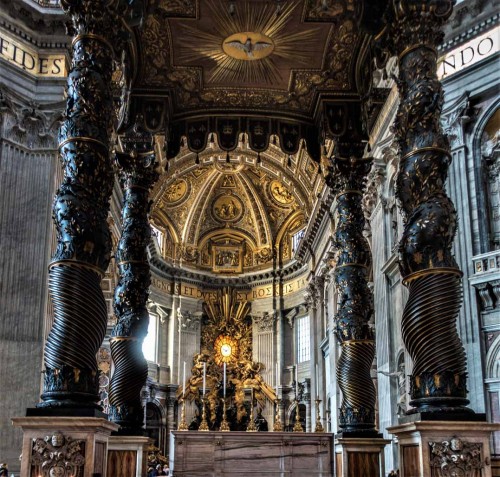 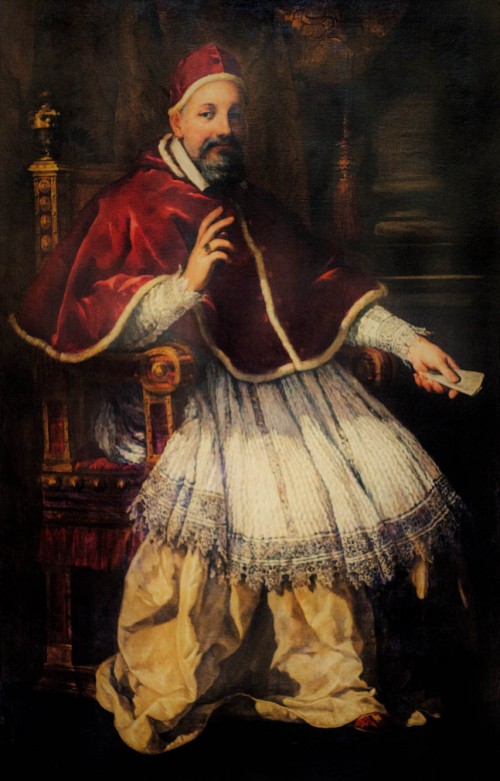 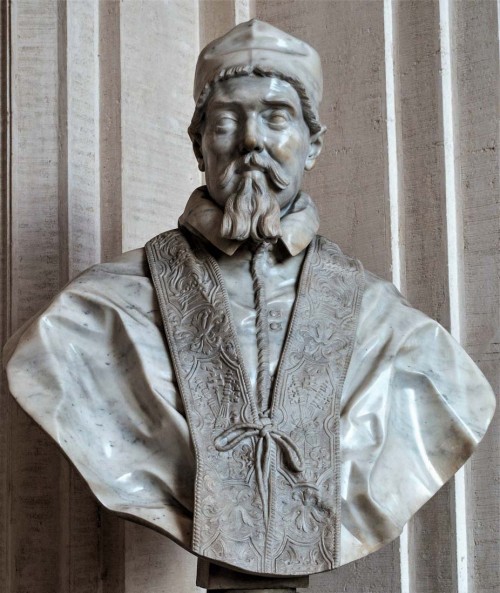 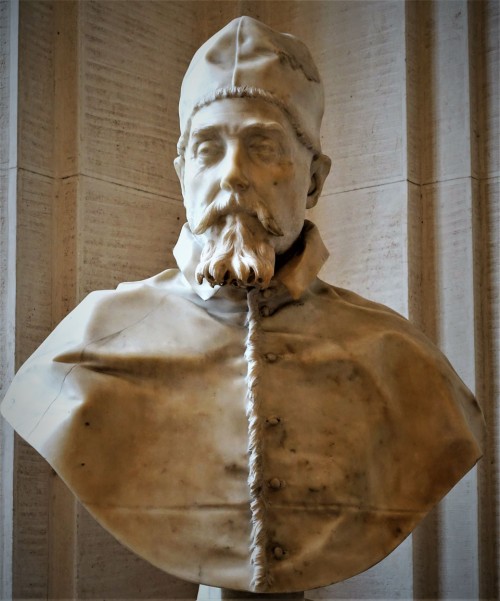 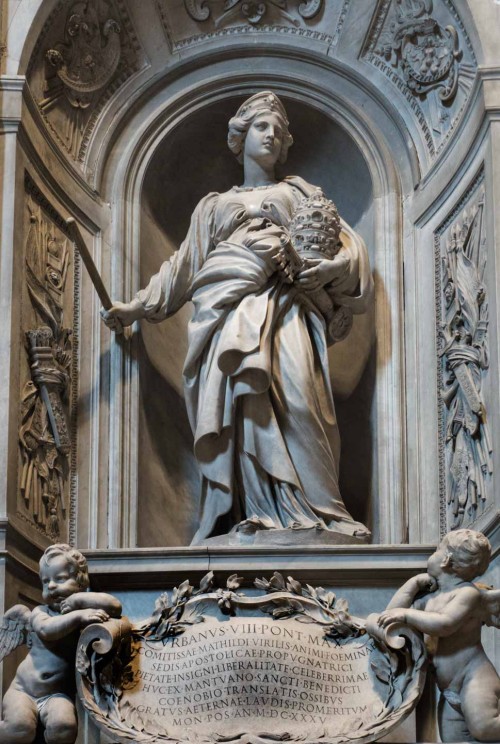 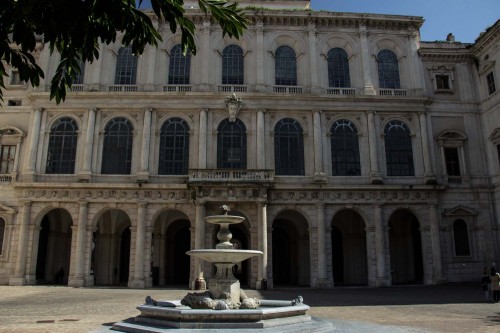 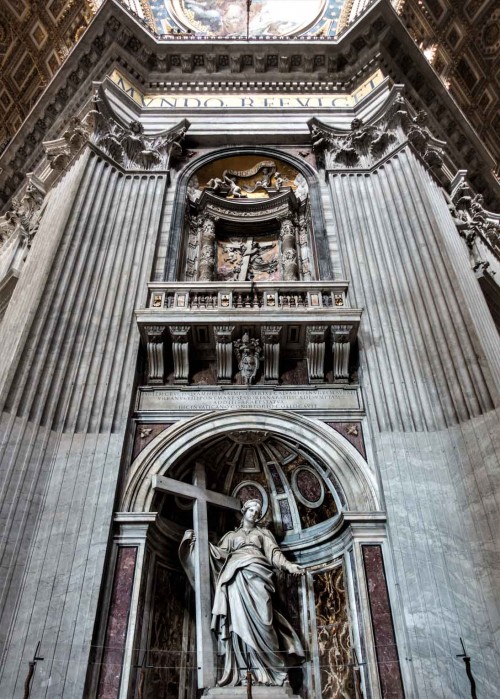 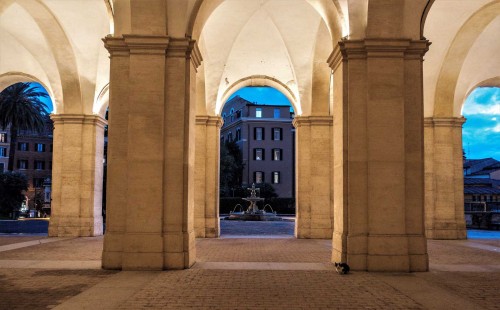 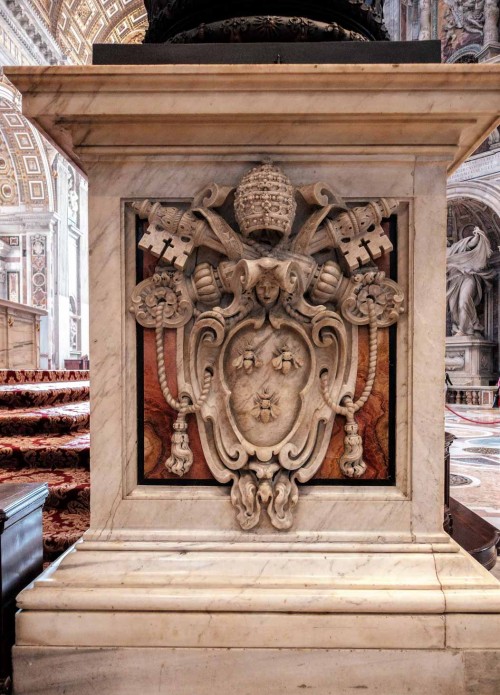 Coat of arms of Pope Urban VIII at the base of one of the pillars of the baldachin of St. Peter, Basilica of San Pietro in Vaticano 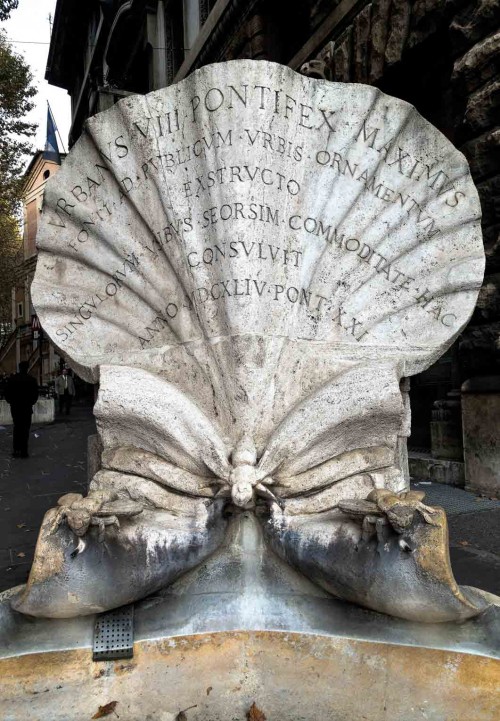 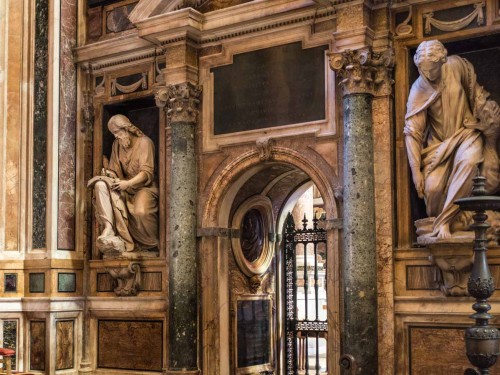 Barberini Chapel in the Church of Sant’Andrea della Valle, one of the first foundations of cardinal Barberini in Rome 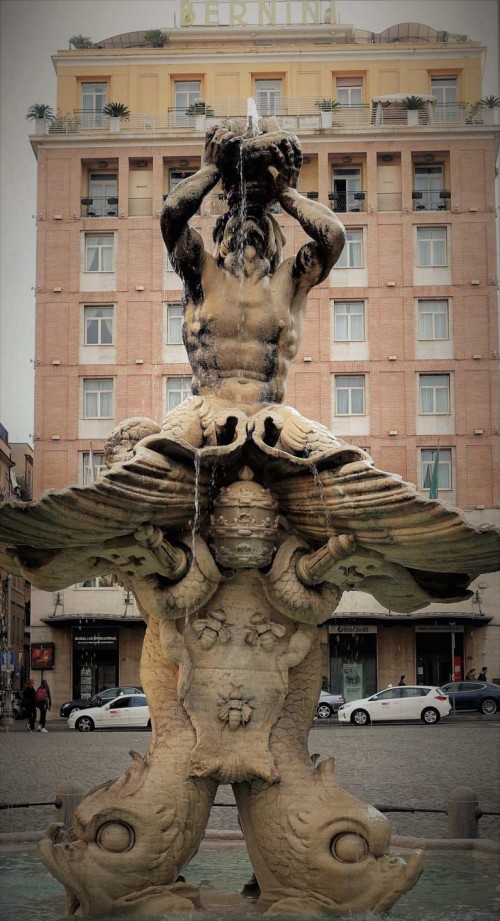 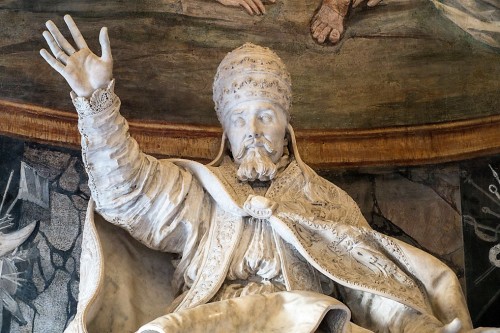 He came from Florence, the then mecca of art, however he received his education in Rome, in the Jesuit Collegio Romano. In France, where at the court of King Henry IV, he held the post of apostolic nuncio, he became interested in French culture and acquired his pro-French sympathies, to which he remained faithful for the rest of his life.

As a cardinal, Maffeo Barberini decided to mark his presence in Rome – a city, in which he was not known and where his surname was completely anonymous. He accomplished this by commissioning the construction of a family chapel in the Church of Sant’Andrea della Valle (1616). It was furnished with sculptures of well-known artists, including Pietro Bernini, and was to be an evidence of the significance of the family. During its creation he got to know Pietro’s son – Gian Lorenzo Bernini – to whom he entrusted the creation of two figures of early-Christian saints – Sebastian and Lawrence, thus creating a new canon for sculptures, in their concept devotional, but artistically excellent. It went together with the then interests of the cardinal in sacral poetry as well as his divagations on the subject of the influence of religious art on the viewer. His literary tastes concentrated on ancient, medieval and Renaissance poetry. He also willingly reached for the pen, while the Latin dithyrambs he wrote contributed to calling him “Papa poeta”. Even then the library of cardinal Barberini numbered approximately four thousand volumes. Most likely he felt right at home in the world of art and among the learned, while in the year 1623 when he became pope (thanks to the support of France), none other than Galileo, in a letter sent to Federico Cesi, the principal (principe) of the Roman Accademia dei Lincei, described his election as “mirabil congiuntura. He was not the only one who was delighted at the ascension to the seat of the bishop of Rome of an outstanding humanist.

The first years of the pontificate of Urban VIII brought a veritable avalanche of musicians, writers and artists to the Eternal City, who were hosted at the Barberini salons and enjoyed the respect and attention of the members of this family. One of the top favorites of the pope was the young, twenty-four year old at that time Bernini. Urban VIII during all of his pontificate almost adored this ingenious artist, entrusting him with all significant constructional and sculpting tasks, in a way annexing him for his own needs. Their mutual relationship was marked with bilateral admiration and attention. It was also Bernini, to whom Urban VIII, while still alive, entrusted the design of his monumental tomb, which was to be located in St. Peter’s Basilica (San Pietro in Vaticano). There we see the enthroned figure of the pope with a friendly visage, with a triple tiara upon his head, who in a gesture of greeting, lordly places his gaze upon us. That is probably how Urban VIII imagined the position and splendor with which the figure of the pope was to be surrounded – not a servant of God, but a ruler and statesman. Urban VIII bestowed equal attention upon the young Pietro da Cortona. Both these artists, like the pope himself came from Tuscany. And it was they, one in architecture and sculpture, the other in painting, who set the tone for the artistic dimension of his pontificate, at the same time adding glory to the Barberini family. The pope himself, on the other hand, would be remembered by history as their patron.

Urban VIII had in mind the idea of a golden age of art and science and desired that this golden age be associated with the era of Barberinis, which subsequent generations could compare to the times of Pope Julius II – the patron of Michelangelo and Raphael. In this context the pope’s greatest task and challenge was to finish the construction of St. Peter’s Basilica. He spared no expanses to provide it with the utmost shine, which was of course guaranteed by Gian Lorenzo Bernini, whom we can thank for the concept and decoration of the middle and apse part of the most important church of the Catholic world. There, the Barberini bees inform us exactly who commissioned this work from the artist. In 1626 the basilica was consecrated. And thus, what had been started by Pope Julius II at the beginning of the XVI century, was triumphantly finished by Urban VIII.

The pope’s interest in art was shared by his three nephews, the nepots – cardinals Francesco Barberini, Antonio Barberini, as well as their brother, the prefect of Rome, Taddeo, who just like their uncle invested their substantial, paid out from the papal treasury appanages into painting and architecture, literature and book collections. Each of them had their own favorite and especially valued artists, collections of art and a group of enthusiasts who would discuss poetry, history and art. Urban VIII as well as Cardinal Francesco Barberini also bestowed their patronage upon the Academy of St. Luke (Accademia di San Luca), wanting to make it into a university patterned after the French.

The reality of the then politics did not allow the pope to concentrate solely on art. The long-lasting court trial of Galileo concluded in 1633. The former supporter and protégée of Urban VIII, who could not be disliked by this enthusiast of science, was sentenced to house arrest – a punishment which was the least of all evils in times when not long ago, in the year 1600, for his heretical views, Giordano Bruno, was burned at the stake. Generally the political situation in Europe was at that time rather complicated, while the pope was attacked even by his closest allies. When the king of Sweden – the protestant Gustav I – reached the south of Germany, spreading fear among Catholics throughout Europe, the pope, who was strictly against all form of intervention and fully supported France, which in turn supported the Swedes was heavily criticized for favoring infidels. The mood in Rome was tense. The ambassador of Spain, Cardinal Gaspar de Borja y Velasco, accused the pope of betraying the Catholic faith and called for a general council, there were also voices postulating the dethronement of Urban VIII. As a consequence the rebellious cardinals had to leave the city, however the position of the Holy Father was weakened. Uncertainty and fear regarding the fate of the State of the Church made him undertake steps to strengthen the defense of Rome. With this goal in mind he built the fort, Castelfranco and strengthened the Castle of the Holy Angel, while fortifying the port in Civitavecchia.

Urban VIII   made decisions and was an absolute ruler all the way until 1637. From then on due to an illness which kept him down until his death, more and more responsibilities fell to his nepot Francesco Barberini, who made decisions about promotions and posts in the Roman Curia. On top of that there were various excesses of the two remaining nepots, the splendor of the Barberini court and the ambitions of Taddeo Barberini, which were the source of countless rumors. Hearing of the displeasure connected with his own nepotism and the overspending of the members of his family, the pope appointed two commissions, which were tasked with settling the issue, whether gifting property to one’s family is a sin or not. The verdict was unanimous – the pope is not sinning, since it is the duty of every Christian to support his own family.

Besides problems with his health and criticism of the actions of his relatives, the pope was also besieged by financial problems connected with his patronage and construction foundations, as well as the war over the Duchy of Castro, which was a private campaign of the Barberinis with the goal of obtaining another domain. Therefore, the label “Papa Gabella”, meaning taxing pope which was given to the pope was not unfounded, since in order to cover his expenses he put no less than 63 taxes upon the inhabitants of the State of the Church, yet the papal treasury was still indebted for an immense amount of 19 million scudos.

When Urban VIII died, riots and fights erupted in the city between the former beneficiaries and supporters of the pope and his enemies, who could finally fully express their hatred for his greedy and avaricious family. There were also instances of spontaneous joy among Romans when they heard of the pope’s death, while everywhere in Rome the coats of arms with three bees were hacked off – a symbol of the family which had ruled for nearly twenty years (this was by no means easy, since reportedly there were approximately 10 thousand of these in Rome at that time). After Urban VIII released his last breath, the papal chambers as well as his corpse were robbed by his servants of all valuables. As the then chronicler Giacinto Gigli reported, there was not even a candle which could be lit by his corpse. That is how the life of one of the most outstanding popes came to an end – a humanist, open to the world and science, a thinker but most of all a patron of the arts.

The most important buildings and structures created during the pontificate of Urban VIII: 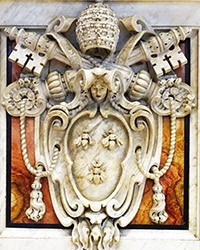 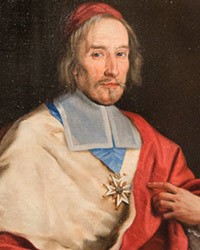 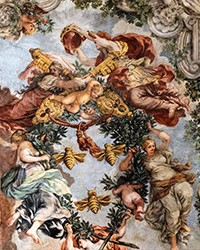