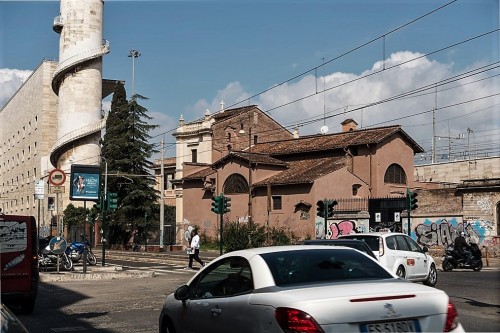 Body of the Church of St. Bibiana 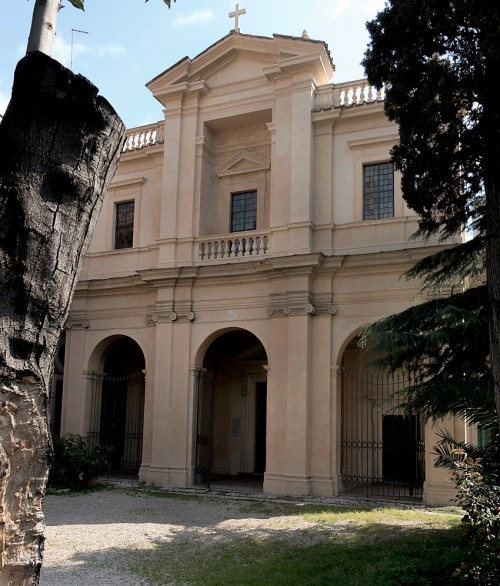 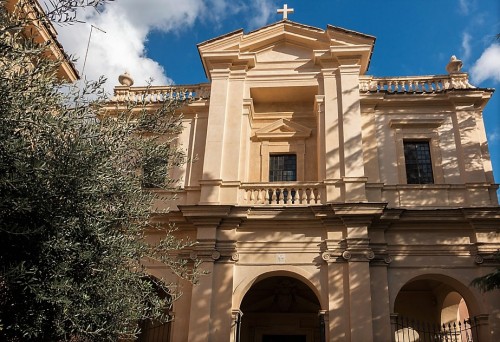 Façade of the Church of Santa Bibiana 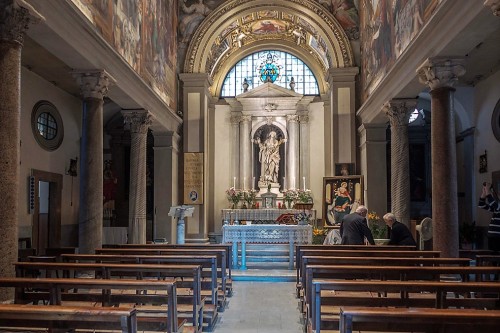 Church of Santa Bibiana with a statue of St. Bibiana in the apse 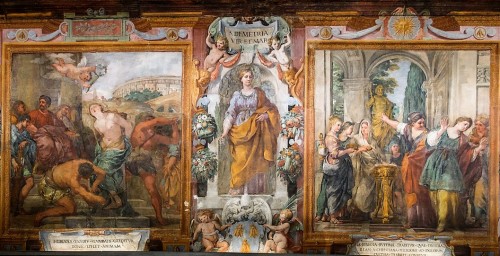 St. Bibiana and Rufina in front of pagan deities, death of St. Demetria in the church nave, Church of Santa Bibiana 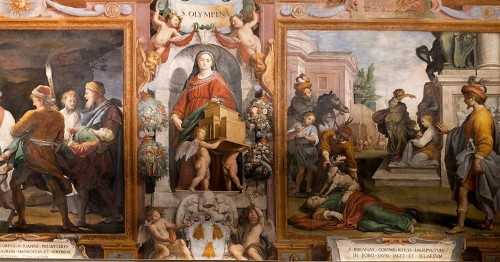 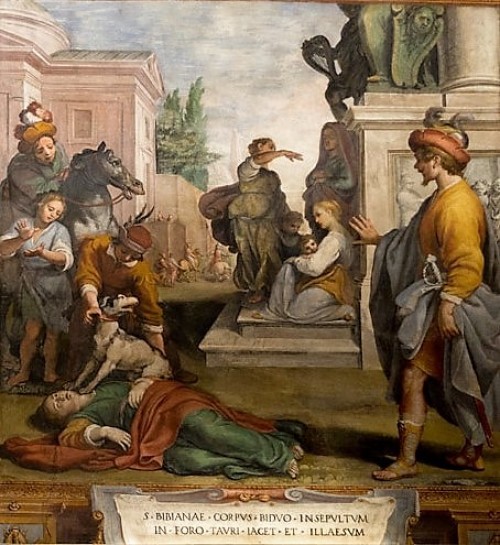 Church of Santa Bibiana, Body of St. Bibiana left for the dogs to devour, Agostino Ciampelli 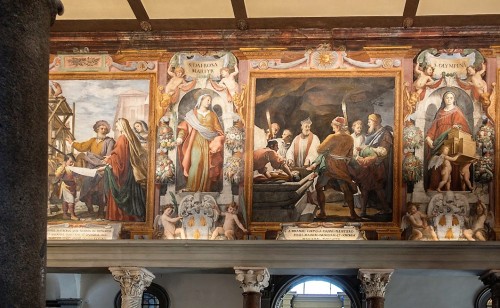 Church of Santa Bibiana, the deposition of the body of St. Bibiana into the grave, Agostino Ciampelli

Church of Santa Bibiana, frescoes in the entrance to the church, Agostino Ciampelli 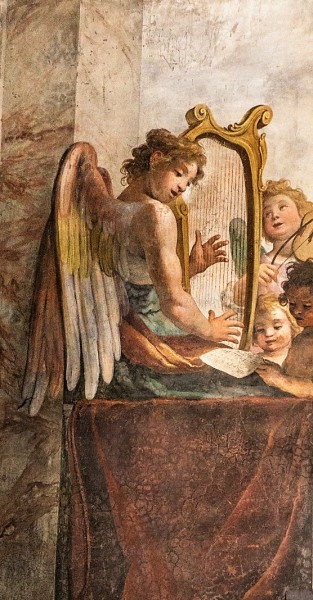 Interior of the Church of San Bibiana, musician angels at the entrance to the church, Agostino Ciampelli 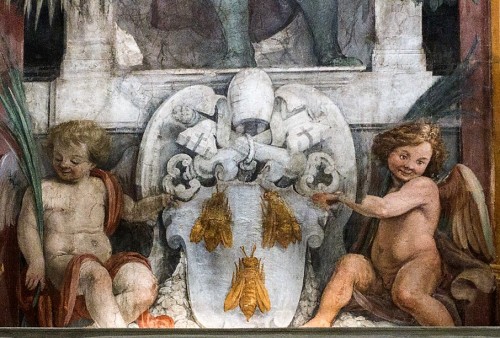 Interior of the Church of San Bibiana, coat of arms of the Barberini family 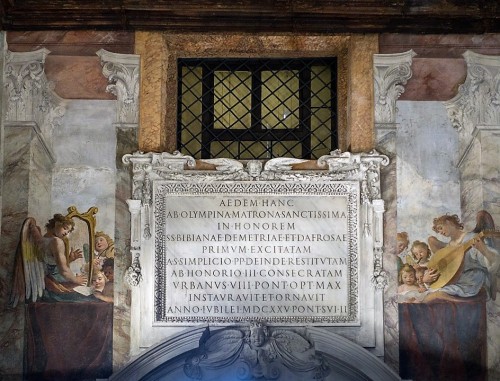 Church of Santa Bibiana, plaque commemorating Pope Urban VIII and the reconstruction of the church 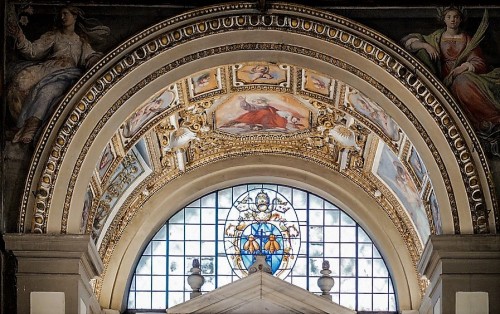 Church of Santa Bibiana, frescos in the apse of the church, Agostino Ciampelli 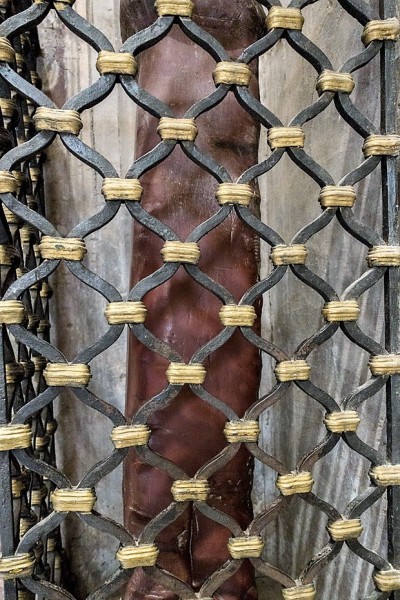 Column of St. Bibiana – legendary instrument of the torture of the martyr, Church of Santa Bibiana 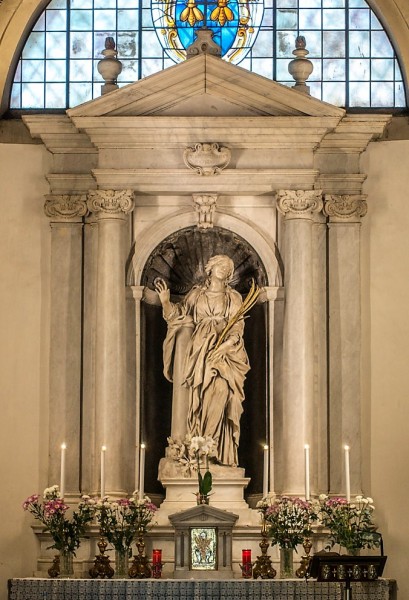 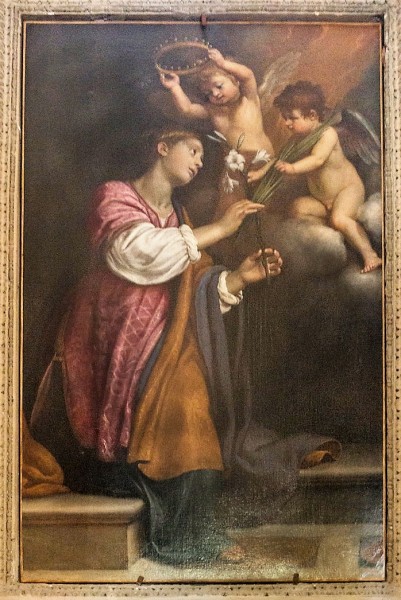 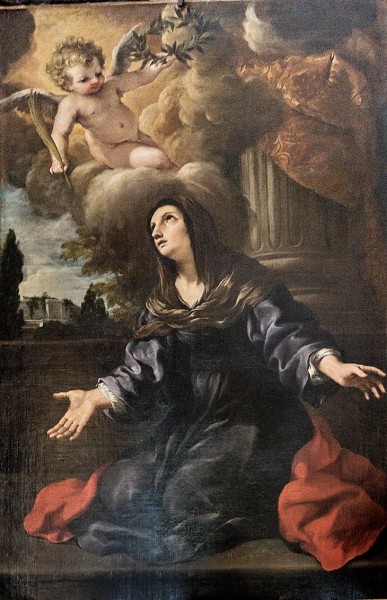 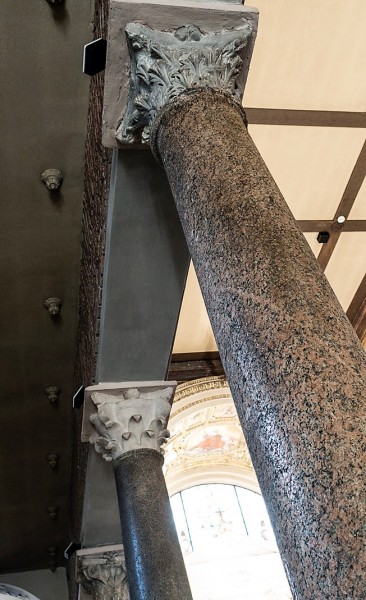 Church of St. Bibiana, columns of the main nave 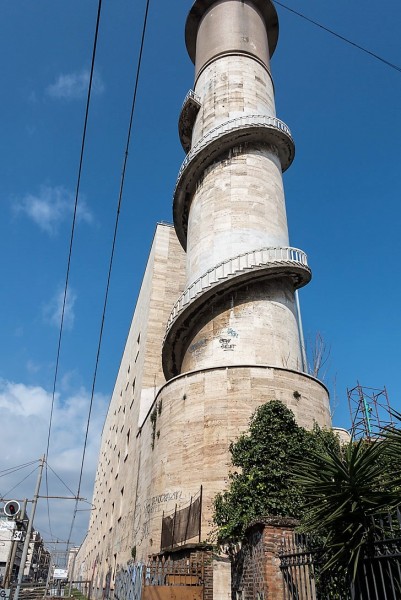 Buildings of the Termini Railway Station

As we can read in the Liber Pontificalis, the church was created in the second half of the V century during the reign of Pope Simplicius, and was dedicated to Saint Bibiana. It was built on the foundations of the alleged house of the martyr, of whom historical sources say nothing, but legends spin a very colorful tale. According to one of them it was in this very location that she was buried along with her mother and sister. All three of them were killed during the reign of Julian the Apostate – an emperor who once again (albeit for a short time) restored the religion of the ancestors in the empire, combating Christianity, which at that time already enjoyed the status of a state religion. And what do archeological discoveries say? They residential building found below the present-day church dates back to the IV century. It is assumed that it could have been the location of one of the typical for early Christianity titulae, however there is no proof of this.

The church is next mentioned in 1224, when Pope Honorius III ordered it to be restored. He also created the convent buildings for the Benedictine Sisters connected with this church. The convent was suppressed (due to  inappropriate behavior of the sisters and suspicions of practicing black magic) in the first half of the XV century, however its buildings remained all the way until the planned great modernization of the complex during the times of Pope Urban VIII. Then the church, which had for centuries been deteriorating, was thoroughly reconstructed, while the convent buildings were destroyed. The pope, aware of the responsibilities placed upon him by the Council of Trent, which also included care over deteriorating churches, became interested in this completely forgotten location, in which as if by fate the remains of St. Bibiana were discovered. Other matters also played an important role. Due to the Jubilee Year (1625) he wanted to renovate Rome and once again restore its significance, and this was to be accomplished by implementing architectural and artistic projects on a broad scale. In order to accomplish this goal he employed a young but very promising artist – Gian Lorenzo Bernini, entrusting him with the creation of a new façade, renewing the interior and completing a sculpture of the saint patron. Until then Bernini was known as a promising sculptor and the façade was his first architectural work. It is worth describing, as it introduces a new type of articulation, better known from palace elevations than those of a church. It has the shape of a portico consisting of two parts of the same width, which are decorated by pilasters superimposed upon one another. The lower part is equipped with arcades, while the upper one with windows (the middle one with a balcony), which in the central part are finished off with a tympanum, on the sides flanked by a form of a balustrade.

Each year on the 2nd of December a reliquary with the relics of St. Bibiana was shown to crowds of the faithful, from this balcony.

However, it was not only Bernini who was lucky enough to participate in the creation of this church. The newly planned interior, whose arrangements were to be reminiscent of early Christian ones, kept three naves. However a broad apse was added along with chapels flanking it on either side. Above the columns dividing the church, which were preserved from ancient times, magnificent paintings of two well-known painters appeared – one of these was the young, just starting his career Pietro da Cortona, the second, well-known in the city, Florentine – Agostino Ciampelli. Let us take a closer look at their works, since they are an excellent example of   Baroque art, which had just come into its own under the auspices of the Barberini family – full of life, decorative and rich in ornamental details. Therefore, we can see breathtaking genre scenes, figures dressed in historical costumes captured in numerous poses, but also various ornaments – flower and fruit garlands, illusionist frames and niches and finally the ever-present coat of arms of Pope Urban VIII (three bees). And it is these very “ornaments” that draw our gaze away from the drastic scenes of the life of Bibiana and create a kind of a rich, full of elegance and splendor scenography. The faithful therefore, not only participate in the martyrdom of the saint, but also immerse themselves in the wealth of this epic and colorful tale. On the left there are frescoes by da Cortona depicting three scenes from the life of Bibiana (the death of St. Demetria at the feet of her oppressor Apronianus, Rufina’s attempt to convince Bibiana to renounce her faith and the flagellation of Bibiana), but there are also figures found in the decorative frames of Flavian (the father of Bibiana) and the aforementioned Demetria (Bibiana’s sister). Ciampelli’s frescoes are found on the opposite side. They show the corpse of Bibiana dumped in the Forum Taurii to be devoured by dogs, the funeral of Bibiana and finally the erection of the church dedicated to her. In the cartouches we will see Dafrosa (Bibiana’s mother) and Olympina (her relative and the alleged founder of the church). The whole used to be topped off by Ciampelli’s magnificent ceiling fresco depicting the apotheosis of St. Bibiana with saints accompanying her. It probably disappeared due to the ceiling collapsing, but we do not know when. If we take a look at the niches on either side of the arch which separate the altar from the main nave, we will once again see the two sisters with attributes of virginity and martyrdom (lily and palm). Ciampelli is also the creator of the two decorative garlands found on both sides of the main enterance, created out of the instruments of torture, which remind us of the suffering of the church patron. The two angels flanking the enterance with a lute and a harp supplement the scene, providing the martyrdom with signs of heavenly exaltation. In all of these decorations, Ciampelli, who was already known in Rome as a skilled representative of late Mannerism, the author of frescoes in such churches as the Santa Prassede, San Giovanni dei Fiorentini, Il Gesù, and San Vitale, seems to go one step further, participating in the creation of the nascent new style.

Immediately at the enterance, on the right side, we will also notice a fragment of a marble column, according to a legend the remains of the very column to which Bibiana was tied in order to be flogged to death. Still today it is an object of cult. Its healing properties stimulated the imagination of the faithful to such a degree, that it had to be secured by a crate of gilded bronze (according to a drawing by Bernini), since dust from it was scraped off, believing it to be a wondrous, healing elixir.

The aforementioned frescoes correspond with the figure of the martyr herself found in the church apse, created by Bernini (Bernini’s Statue of St. Bibiana). It was the first work of the young sculptor dedicated to a saint, in addition a fully clothed woman, whom he depicted, interestingly enough, not at the moment of her martyrdom, but bliss (assumption). The light entering through the rear window additionally dignifies her figure and emphasizes the supernatural miracle happening right in front of our eyes. In an alabaster urn placed at her feet there are relics of Bibiana, as well as Dafrosa and Demetria.

Inside the church there are several built-in epitaphs from the XIV and XV centuries commemorating the sisters of the former convent, as well as a number of chapels. The most interesting of these are the ones located on both sides of the apse. In one, dedicated to Dafrosa, there is a painting of Bibiana’s mother, by Pietro da Cortona, in the other a grateful image of Demetria surrounded by two angels carrying a crown and an olive branch for her, the work of Agosto Ciampelli. It is also worth mentioning the chapel of the Petroni family, in which there is a Baroque painting of Girolamo Troppa (student of da Cortona), depicting saints (Flavian, Faustus and Prester John), venerating an icon of Our Lady with Child.

Today, looking at this beautiful church, it is hard to imagine that in Bernini’s time this area was bereft of any buildings and was occupied by a vineyard. This situation changed radically in the sixties of the XIX century, when – at the initiative of Pope Pius IX – the first in Rome railway station was created here. It led to the destruction a network of streets created in the meantime. Subsequent modernizations of the city meant dramatic isolation of the church. However, it is not abandoned. Everyday residents living nearby meet with their priest to pray and sing. 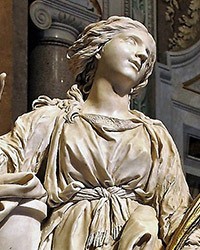 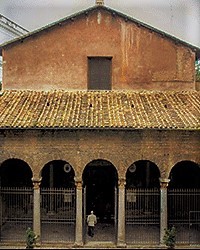 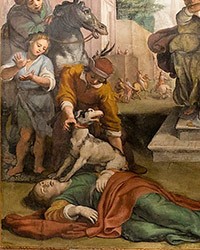