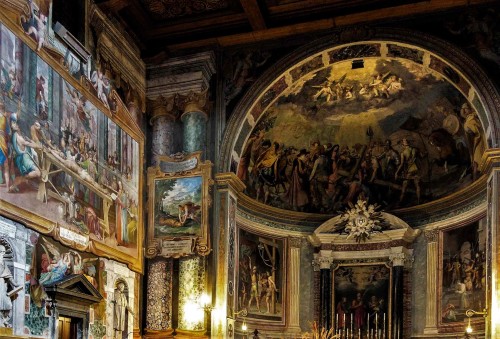 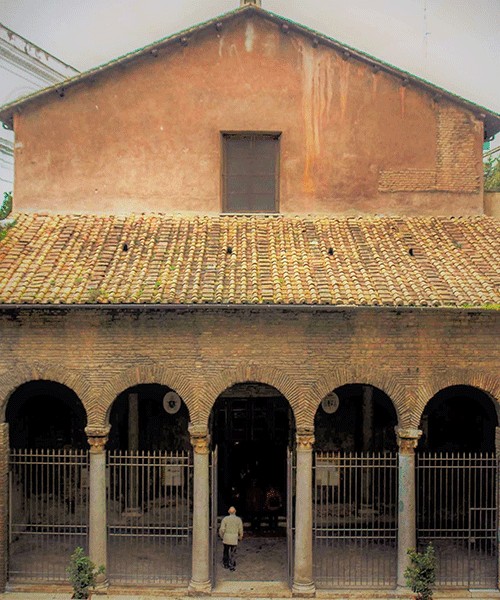 Portico of the Church of San Vitale at via Nazionale 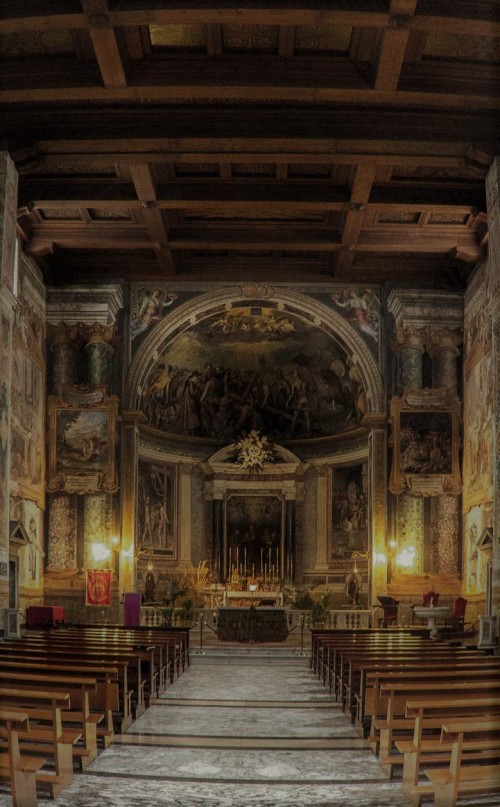 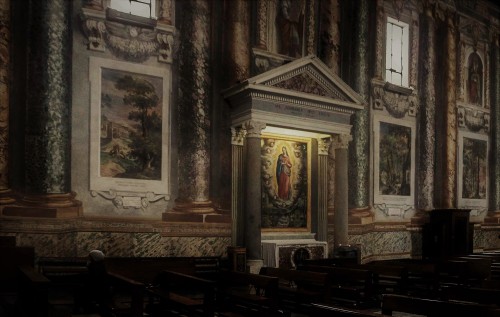 Basilica of San Vitale, painting decorations from the turn of the XVI and XVII centuries 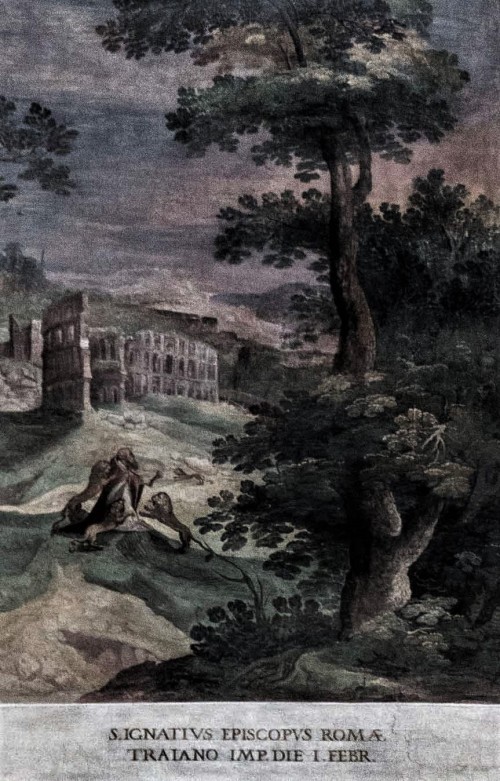 San Vitale,painting decoration of the church interior – The Death of St. Ignatius with the Colosseum in the background 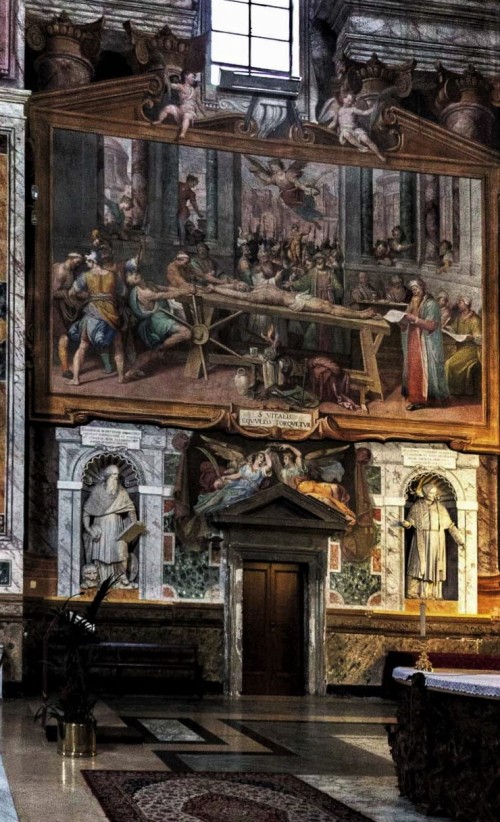 San Vitale, decoration of the transept of the church – The Martyrdom of St. Vitalis, Agostino Ciampelli 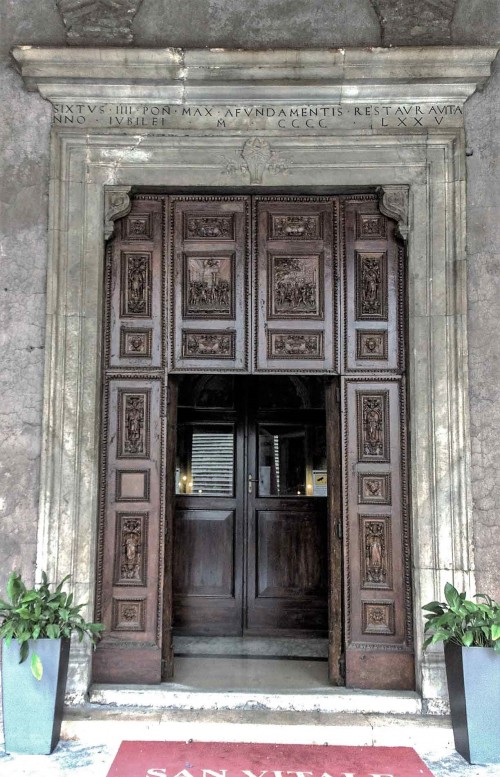 Basilica San Vitale, enterance door with scenes of the Martyrdom of SS Gervasius and Protasius 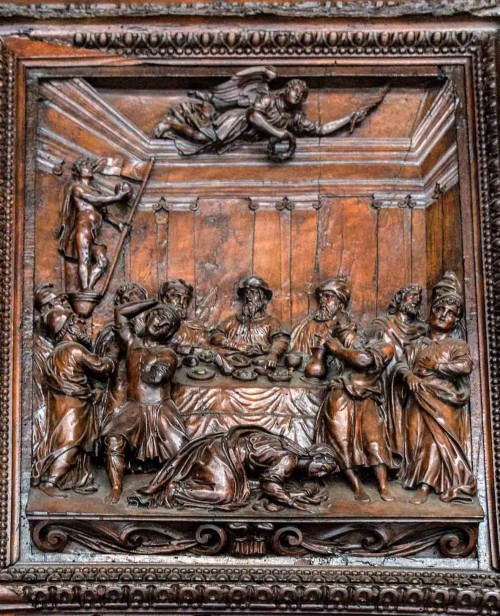 Church of San Vitale, one of the panels of the enterance door

Church of San Vitale, one of the panels of the enterance door 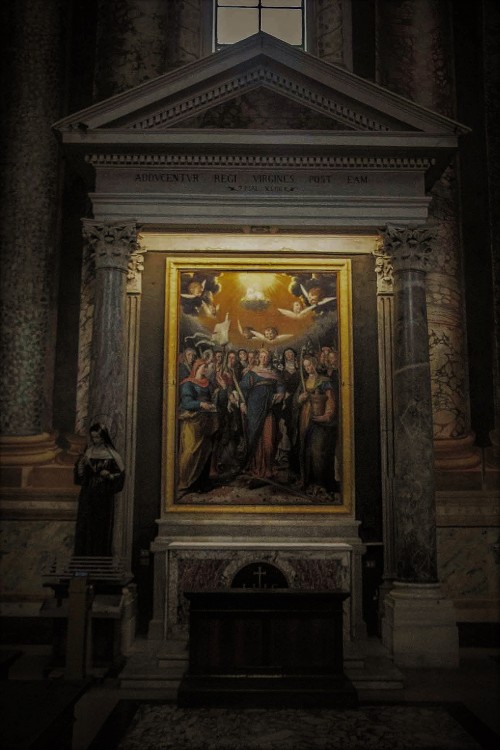 Basilica of San Vitale, Chapel of the Holy Virgins (St. Catherine of Alexandria in the middle of the painting), G.B. Fiammeri

This church is generally not part of standard tourist information guides, although it is one of the oldest in Rome. It is also difficult to find, despite the fact that it is located along one of the busiest streets, in the very heart of Rome – at via Nazionale. The great building of the Palazzo Delle Esposizioni,  completely overwhelms it, while its level, lowered in relation to the street, does not make it any easier to locate. In order to enter it, one must descend down 38 steps – such was the level of the ground in this place, when this church was built.

This church is generally not part of standard tourist information guides, although it is one of the oldest in Rome. It is also difficult to find, despite the fact that it is located along one of the busiest streets, in the very heart of Rome – at via Nazionale. The great building of the Palazzo Delle Esposizioni,  completely overwhelms it, while its level, lowered in relation to the street, does not make it any easier to locate. In order to enter it, one must descend down 38 steps – such was the level of the ground in this place, when this church was built.

It was located on the important traffic route between Quirinal Hill and Viminal Hill and served the purpose (as did all the titular churches created at the time)of the evangelization of Romans, who were at those times, to a large extent still pagans. It was situated at the ancient Roman road, the vicus Longus, which led from the Forum of Augustus to the Baths of Diocletian.

According to Liber Pontificalis, the place where the church stands today, was previously the location of a titulus (house of prayer) Vestinae, erected thanks to the funding of a wealthy Roman named Vestina. During the pontificate of Innocent I (402-417) it was consecrated and dedicated to Gervasius and Protasius, whose earthly remains had just been found in Milan by Bishop Ambrose. This significant for Christianity clergyman, the latter saint, had as legend would have it, a dream in 386 regarding two Roman martyrs, whose burial places were in a miraculous way discovered, after Ambrose pointed out their location.

Surprisingly enough, at the end of the VI century the name of the church was changed to tituli sancti Vitalis, in this way recalling St. Vitalis, a rather unknown saint, a Roman solider, believed to be the father of the aforementioned brothers. Fragments of the structure which was most likely created in the V century are still visible today. We can see them in fragments of the walls of the present-day church, in the exceptionally preserved apse, but most of all in the façade, which provides us with an image of what the early-Christian building, or at least its enterance looked like. It is preceded by a rectangular vestibule supported on arcades and columns decorated with capitols. Through the centuries the church fell into ruin. In medieval times, the area around it was completely depopulated, while the narrow street, set among shrubs and bushes was renamed via di San Vitale. Then, the church was renovated several times, until 1475, when Pope Sixtus IV, ordered the complete renovation of the deteriorating building. Still today, we can find the coat of arms of the pope from the della Rovere family (oak with leaves and acorns) in the church portal, along with an inscription commemorating this event. The initial three-nave basilica was turned into a broad hall with an apse at the top, while the side naves were done away with. Altars were created on either side, while the ceiling was covered with coffers. The one visible today was created in 1938 and is a distant memory of the Renaissance one.

The next renovation took place over one hundered years later, when the church was given over to the Order of the Jesuits. It stayed under their care from 1595 to 1880. It was at their initiative that it was decorated with paintings still preserved today. They were created at the turn of the XVI and XVII centuries, during the period of counter-reformist struggle for the souls of the faithful, which erupted between the Roman Catholic Church and the schismatics and dissenters, meaning the Protestants. The church was not designated for the faithful – it served novices of the nearby monastery (Sant’Andrea al Quirinale) and it was for them that the propaganda painting cycle was created, the one that can be seen today on the building walls. The Jesuits and their leader St. Ignatius of Loyola, believed themselves to be the continuators of the tradition of saint martyrs – loyal, unconditionally obedient and disciplined defenders of pope and faith. They were characterized by an iron discipline, military obedience, but also excellent substantive and spiritual preparation required for missionary and evangelization service. They acquired all these during a two-year novitiate, followed in subsequent years by the study of theology, but also mathematics, natural sciences and philosophy.

The frescoes represent idealized and fancy landscapes (including Roman vedute), that serve as the background for the martyrdom of each individual saint and prophet. The educational and didactic goal is easy to comprehend – in this blunt way the young Jesuits were made aware, what a return to paganism entailed, a return which in the north of Europe had become a fact. At the same time, the imagination of the friars was stimulated, showing them the grandness of martyrdom and the power of faith, for which the ultimate price is paid. A similar painting series can be found in another, at that time also occupied by Jesuits Roman church – the San Stefano Rotondo, although the scenes of martyrdom were displayed in a much less drastic way there. The authors of the frescoes in San Vitale, had wanted to set the scenes of martyrdom in the monumental architecture of the ascending all the way towards the ceiling, illusionistically painted columns, which at the same time were to recall the Roman architecture of a bygone era, of which the greatest example was the nearly finished at that time St. Peter’s Basilica (San Pietro in Vaticano). On one hand then, the greatness of sacrifice in the name of faith was shown, on the other – the power of the Roman Catholic Church. The authors of these paintings were little-known painters – Tarquinio Ligustri and Annibale Priori. The inscriptions accompanying the scenes depicted in painted frames, tell the viewer who is presented in a given scene. We can see both the prophets – Jeremiah, Daniel, Malachi, Zechariah Ezekiel, or Isiah, as well as early-Christian saints – Ignatius of Antioch, Marcellinus and Peter, Clement, Januarius, Andrew Stratelates, Paphnutius, Martinian, Saturninus, and the 40 Martyrs from Sebaste. Recalling the prophets and saints of the Church on the walls, was a reference to the great speakers and spiritual guides. However, the most important and significant challenge for every Jesuit was the example of Christ himself, whose martyr’s way towards death is shown in a painting at the top of the apse.

In the main altar there is a painting representing the saint patrons of the church – Vitalis, Valeria (his wife), Gervasius and Protasius. On either side of the altar there are paintings, The Flogging of St. Gervasius and The Beheading of St. Protasius, while in the transept there is a scene depicting tortures of St. Vitalis, in order to force him to honor pagan gods, and finally the act of the murder itself – as legend would have it, Vitalis was buried alive and covered with stones. The author of these developed, multi-figure scenes was the Florentine Agostino Ciampelli, a Mannerist, who was very popular and that time and was the creator of numerous frescoes in Roman churches.

Leaving the church, which in the imagination of the creators of its painting arrangements, was to transport the onlooker, in this case a Jesuit novice, to the times of early Christianity and constitute an example for contemporary people, we must linger for a moment in front of the wooden enterance doors. They were created at the beginning of the XVII century, by an unnamed Jesuit master and they depict the scene of the martyrdom of SS. Gervasius and Protasius in this way inaugurating the martyrological series, which begins here and ends in the church apse. 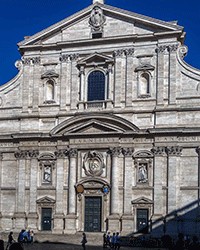 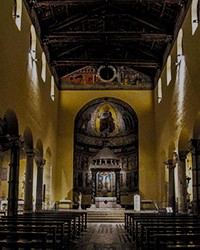 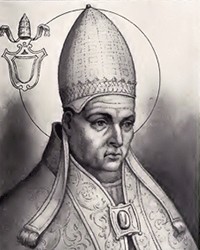