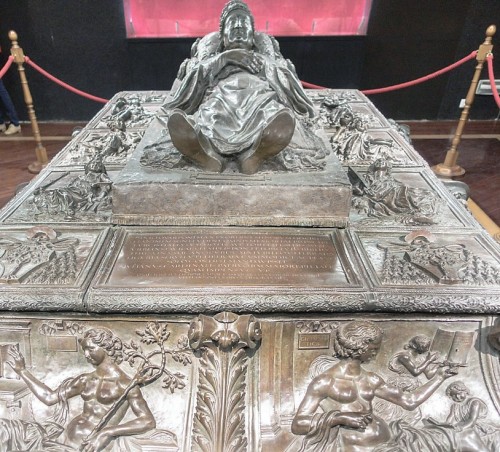 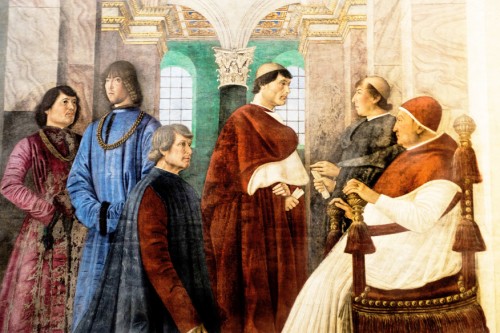 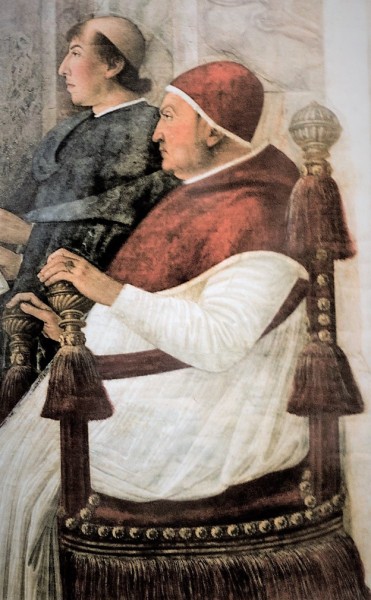 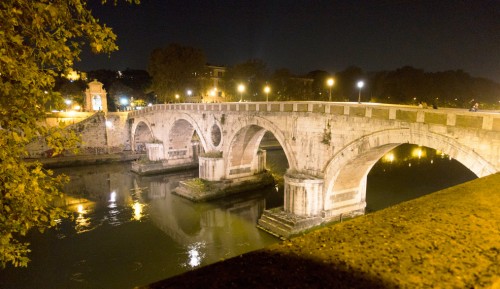 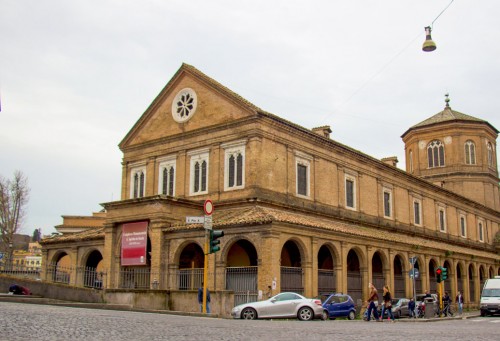 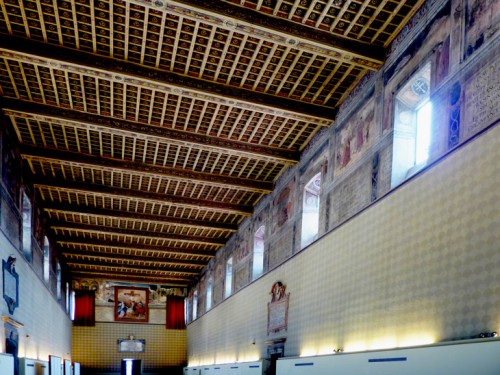 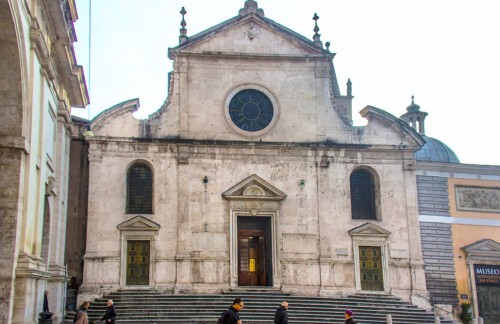 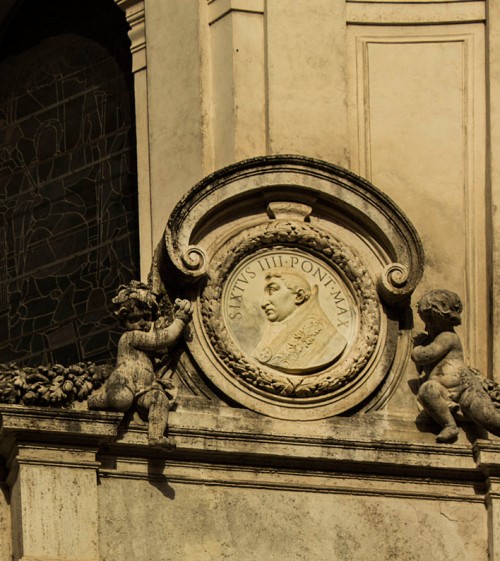 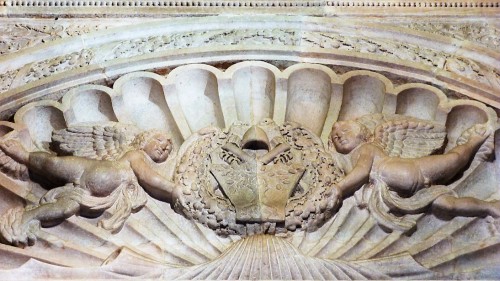 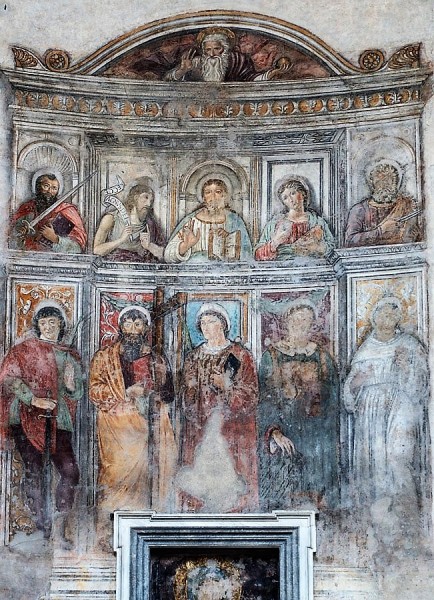 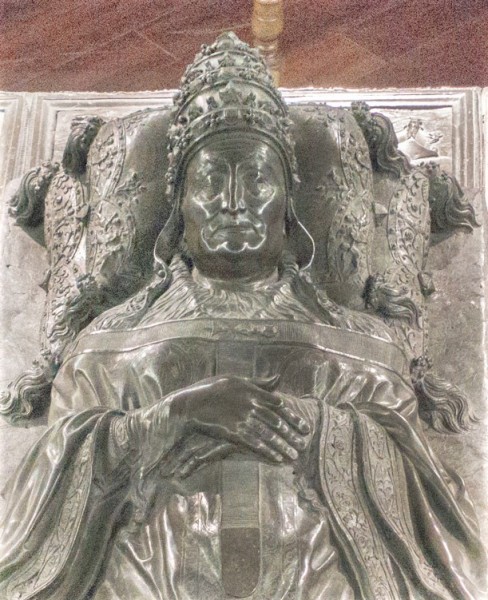 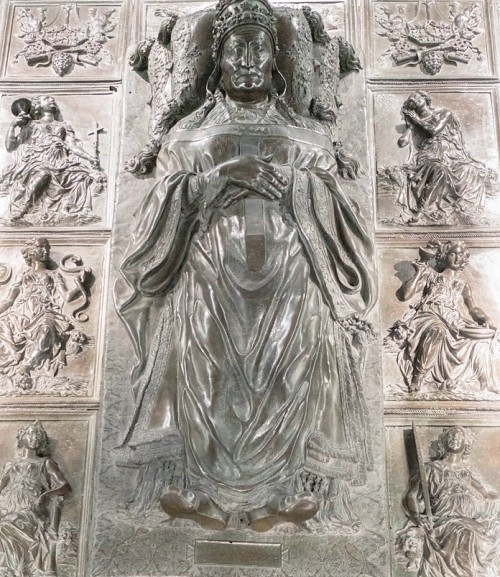 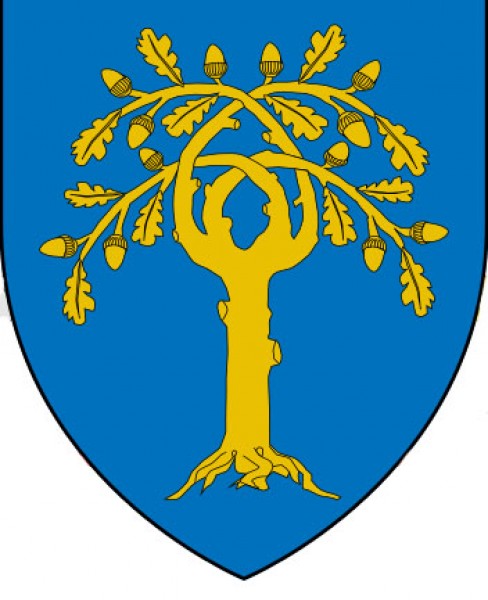 He had an impeccable reputation of a man of deep faith and of a reformer. Thanks to the support of Latino Orsini, Francesco Gonzaga and Rodrigo Borgia (the latter Pope Alexander VI) he attained the papal tiara in 1471, and in return he gave his protectors lucrative offices and titles. His election foretold of a reign of a reasonable, devoted to the Church, erudite, who obligated himself through the so-called conclave capitulation to call a council and to move away from nepotism. However, these conditions proved difficult to fulfill. Immediately after his enthronement the freshly minted pope began nominating his nephews and other relatives to the posts of church dignitaries. Seven of them became cardinals, others were given offices and titles. Despite the fact that the papacy had before been based on nepotism, Sixtus allowed it to grow to caricature proportions. Subsequent popes would follow suit. However, that is not the end. In order to increase the significance of the family it was necessary to have lands, which would for centuries secure its survival. Actions with this goal in mind led to long- lasting armed conflicts and problems in which it would be difficult to see any care for the interests of the State of the Church. It should be assumed that, with the pope’s approval an assassination attempt on the ruler of Florence, Lawrence the Great and his brother Giuliano, was carried out. As we know, the final effect was not a change of the ruler, but a bloody revenge of the de Medicis, on the Pazzi family among others, with whom the pope’s nephew hatched the conspiracy plot.

During the pontificate of Sixtus IV, giving Church offices to people who were unworthy and corrupt was common practice, which resulted in the secularization of the Roman Curia. The bishop of Rome obtained money by many different, controversial, but effective means. One of these was opening a profitable amusement park (brothel) in the city, of which the income brought substantial profits, while also taxing prostitutes, selling church offices and posts, paid indulgences for the deceased and giving away sinecures in exchange for high bribes. This should come as no surprise, the pope’s ambitions to make Rome into a representative city and a center of art cost a fortune.

Despite wars, which he constantly waged and family and dynasty issues, which required a lot of financial capital, he was a patron of the art and an admirable funder, of which the likes Rome had never before seen. In this regard he can be called a “great” pope. He was also an enlightened man and it is almost impossible to fathom how in one man greed an ambition could in such a way coexist with sensitivity to art, science and faith. It was thanks to him that Rome got new churches, but also acquired orderly, broad streets and squares as well as renewed city walls. The city – capital of Christianitas – was to amaze and delight pilgrims coming to Rome due to the Jubilee Year of 1475, among which there were crowned heads of state from all over Europe. The Hospital of the Holy Spirit (Ospedale di Santo Spirito) was renovated and enlarged, the bridge Ponte Sisto was built (1474), facilitating the flow of pilgrims into the Vatican. Thanks to the pope numerous deteriorated churches were restored, including the four most important patriarchal basilicas, while ancient sculptures which were in the possession of the Church were transferred to Capitol Hill, which in turn gave rise to a future museum (Musei Capitolini), the Vatican Library was enlarged and opened to the public. The pope also  supported the development of science, and set up many kinds of artistic and musical groups. Sixtus IV surrounded himself with humanists, purchased manuscripts, patronized artists. At his invitation, the greatest sculptors came to Rome, but especially painters employed to decorate the chapel (Sistine) created at his initiative. Entrusting them with the decoration of the walls of this building was an artistic undertaking which had never before been seen.

Heavy criticism, with which the pope met from his contemporaries, was to a large extent exaggerated and false. He was accused of having six children out of wedlock, including one with his sister, as well as of homosexualism. Many of these accusations were the work of the then Senate scribe Stefano Infessura, a protégé of the Colonna family, fierce rivals of the pope and his family. In his Diary of the City of Rome, Infessura speaks of stinginess, vanity, greed, pride, and luxury, of his cruelty towards people who died in the wars which he started. These lies were a propaganda agitation, which was to depreciate the pope in the eyes of the Romans, and which to a large extent succeeded. When Sixtus died, his corpse was desecrated. Even the bed on which he was laid to rest was stolen. The master of ceremonies found neither any vessels in which he could put water nor any parts of the pope’s undergarments. At that time brutal riots and robberies occurred on the streets of Rome. Battles erupted among supporters of cardinals and Roman families and numerous papal nepots, on whom part of the anger of the Roman populace concentrated. The conflicted cardinals gathered at the conclave, needed only three days, to choose the next pope (Innocent VIII) and thus pacify the slaughter taking place on the streets.

The pope was buried in the Basilica of San Pietro in Vaticano, but his final resting place is the Vatican Grottoes. Cardinal Giulio della Rovere (the later Pope Julius II) commissioned the construction of his uncle’s tomb after his death, entrusting the works to the Florentine sculptor, Antonio del Pollaiuolo. After nine years it was completed (1493) and today it can be viewed in the treasury of the Vatican Basilica. The tombstone made of bronze, shows a lying figure of the pope and is decorated with personifications of virtues and arts as well as with the della Rovere family coat of arms – a motif of an oak tree with twelve acorns. This coat of arms, often seen on the walls of Rome was obtained by the pope (of low birth) from a certain aristocratic family from Piedmont, with which he shared a surname but was in no way related to.

Buildings and structures created at the initiative of Sixtus IV: 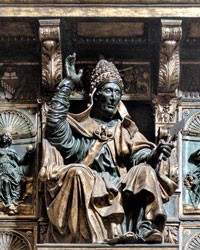 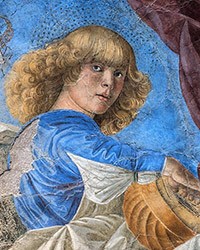 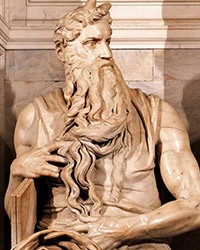 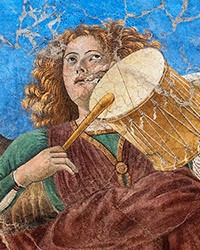 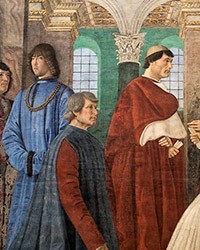