Hercules – a fearless but rather dull protector of Rome 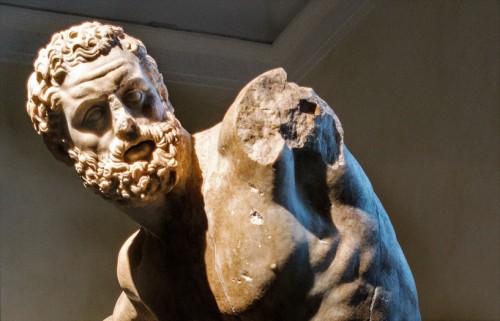 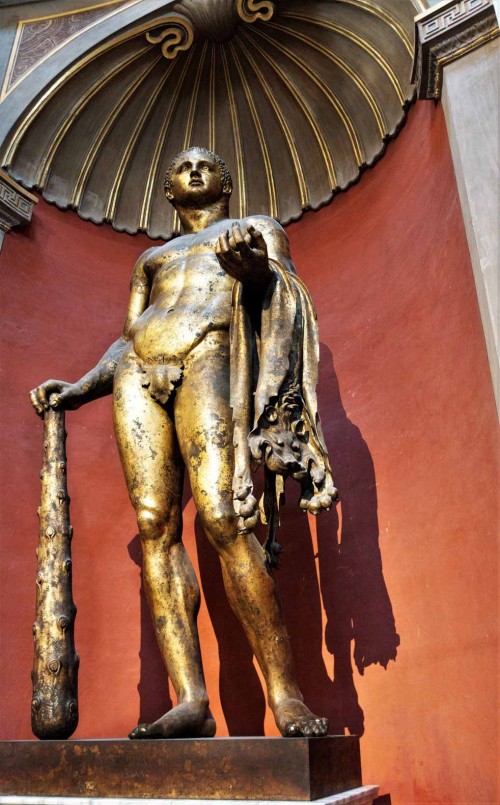 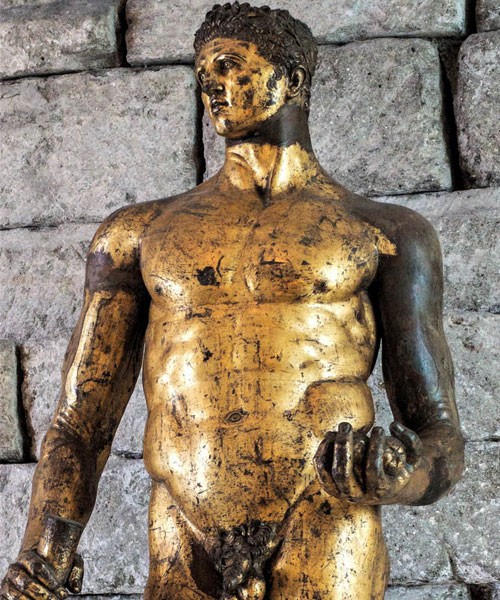 The statue of Hercules from Forum Boarium, Musei Capitolini 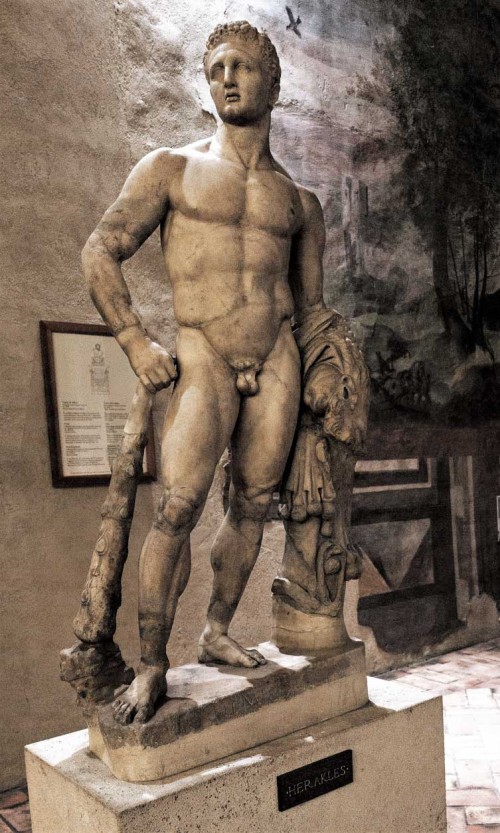 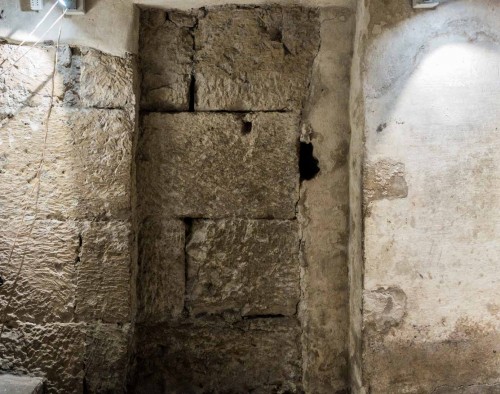 Catacombs of the Church of Santa Maria in Cosmedin, remains of the wall of the old Ara Maxima altar 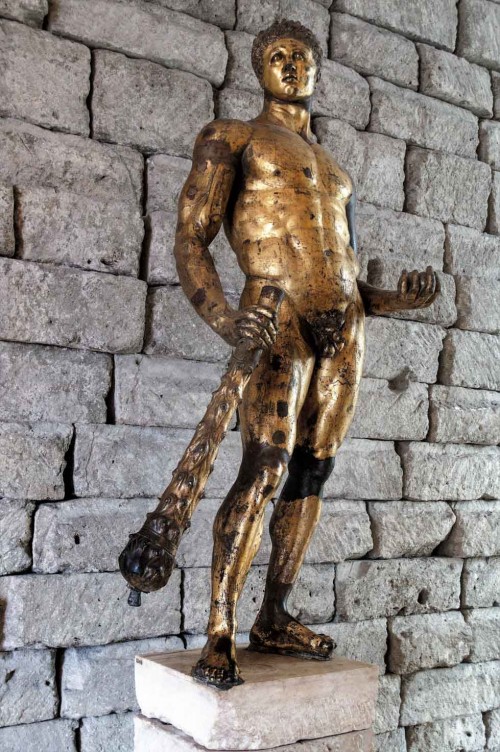 Statue of a gilded Hercules from Forum Boarium, Musei Capitolini 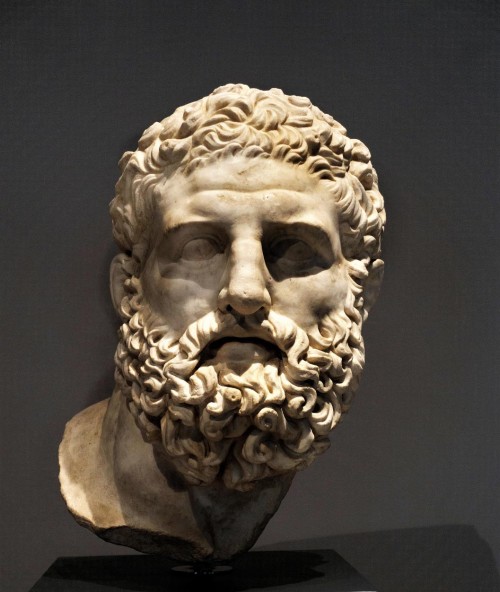 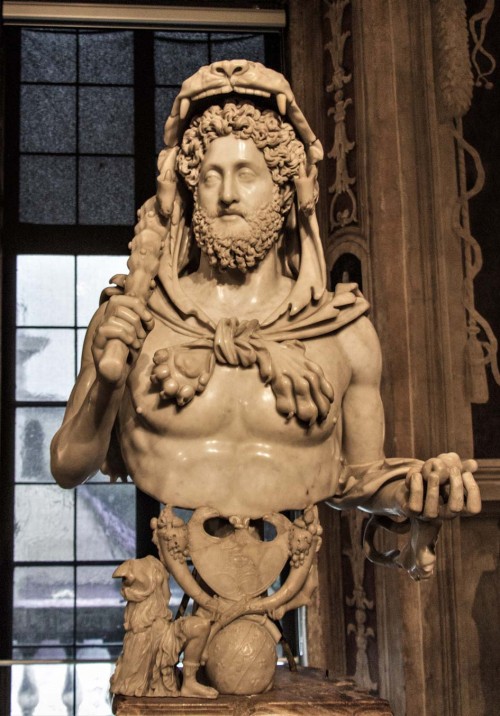 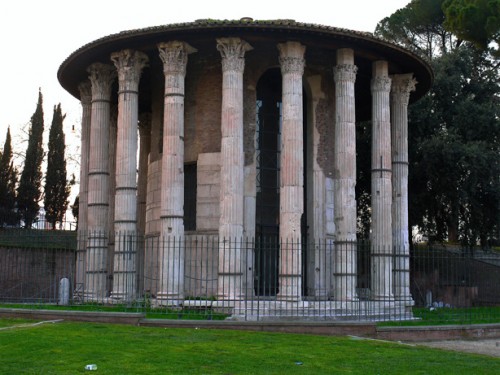 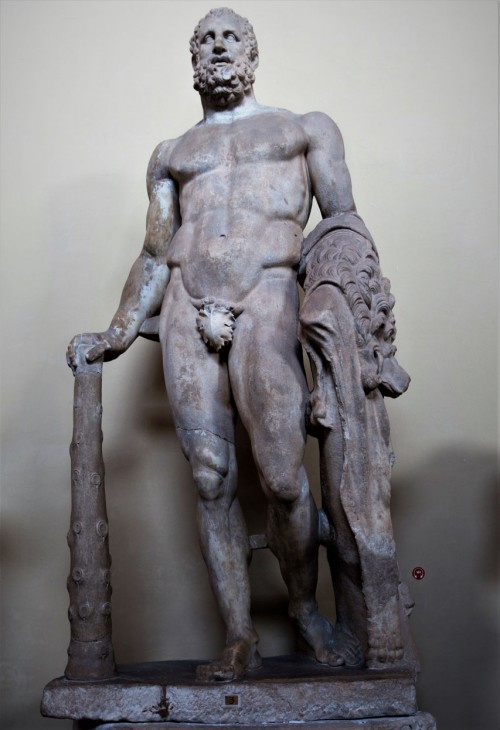 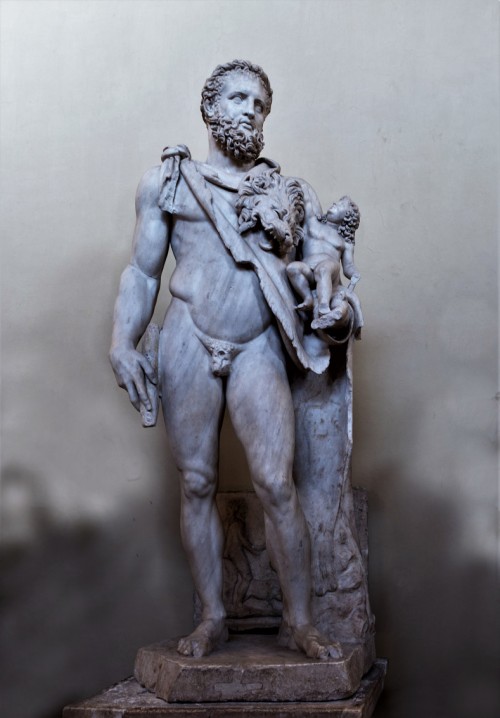 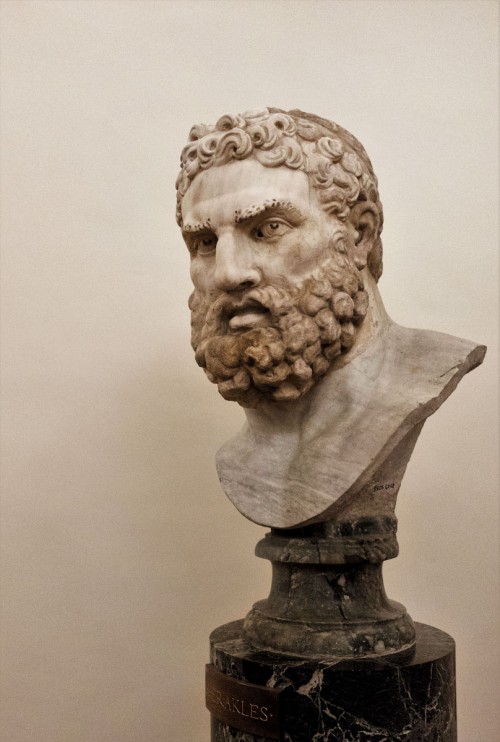 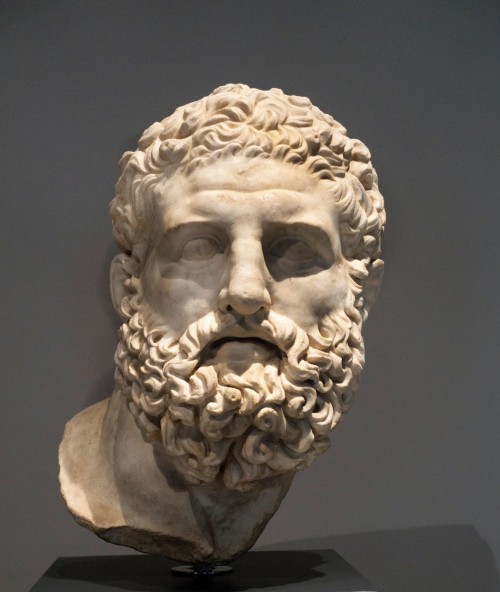 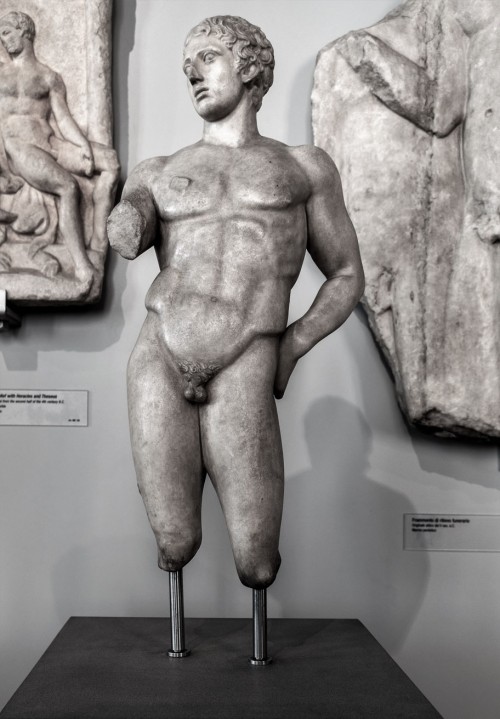 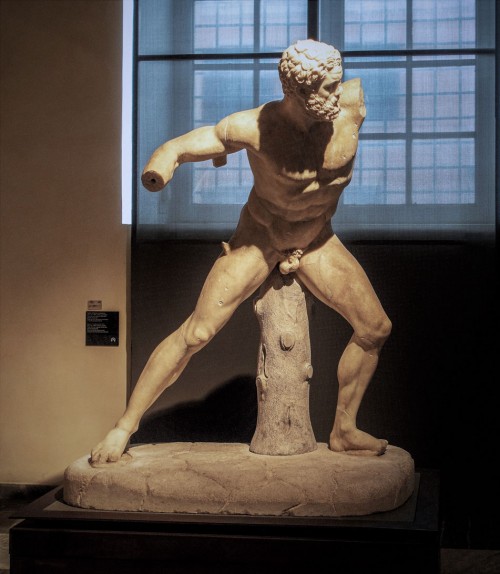 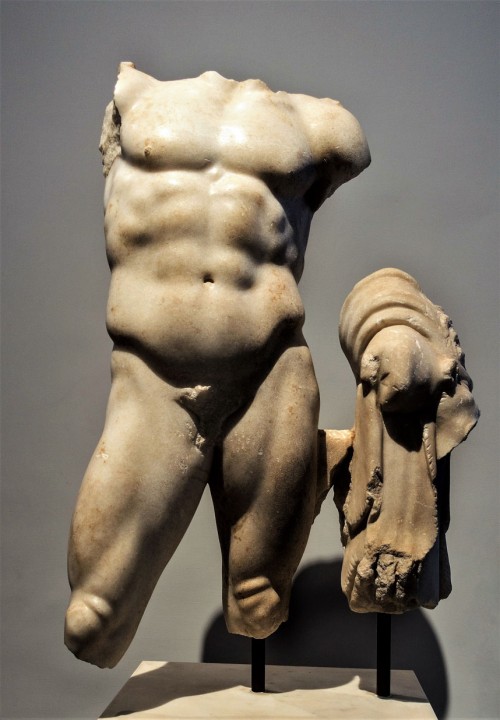 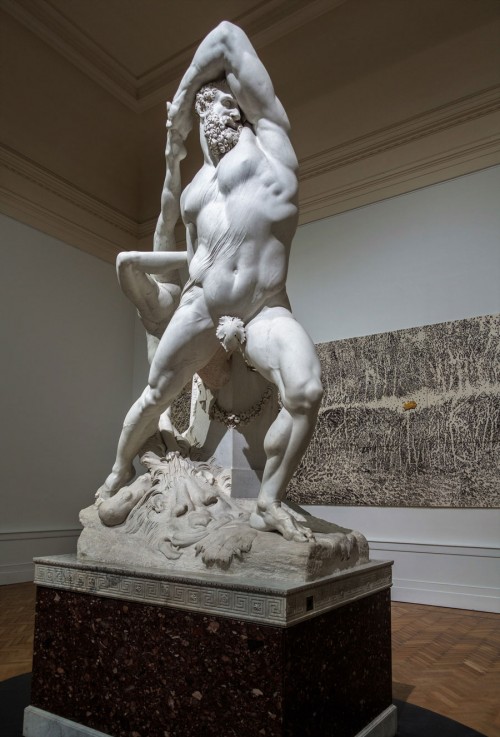 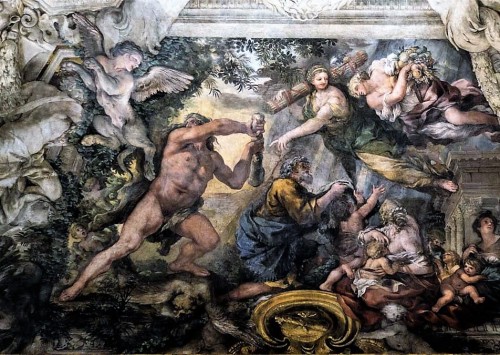 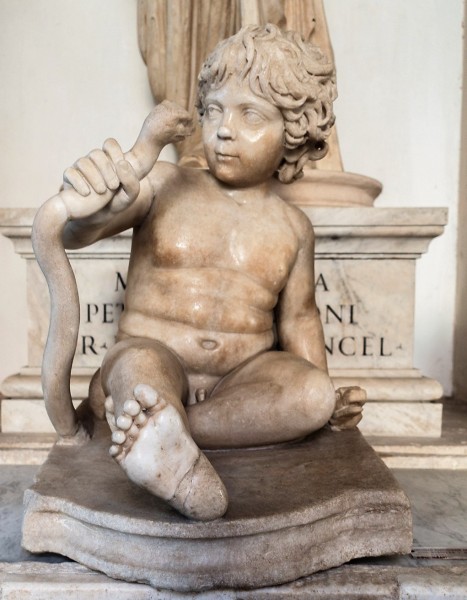 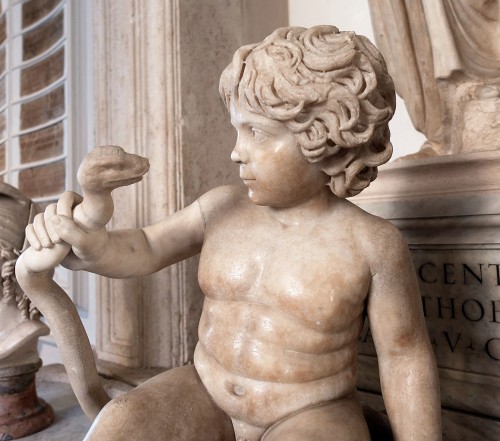 Why is it that he – a strongman, who according to a myth had problems in school, due to beating his teacher to death and was known for his ravenous appetite, here in Rome achieved such great and long-lasting popularity?

It is assumed that the cult of the Greek Heracles was brought to the territory of present-day Rome by Greek merchants at least by the VIII century B.C. He was also know to the Etruscan inhabitants of the Apennine Peninsula, who worshipped him as Hercle. He was the son of the King of Thebes, Amphitryon, but in reality he was conceived by Zeus himself, who took on the form of the Theban ruler, desiring to spend a night with his wife Alcmene.

The Romans created a legend supplementing the Greek image of the hero. They believed that he has looked upon them with special favor ever since arriving on Aventine Hill on his way back to Greece, after completing the tenth out of the twelve labors force upon him by the gods – the obtaining of the cattle of Geryon. It was here, that during his sleep, resting after the hardships of his trip, Hercules was robbed of few of the cattle, by a three-headed giant Cacus who lived in a nearby cave and who for ages had been devouring people and animals in the area. His hideout, as is written by Virgil, was full of skulls and bones of his kidnapped victims, and the floor was soaked with their blood. As was fit for Hercules, without much thinking, he used his club to kill the monster and reclaim his property. In the location where the event took place, the then ruler Evander, as thanks to Hercules introduced his cult. In time the square where he was worshipped became the first and earliest Roman forum (Forum Boarium), not without reason devoted mainly to cattle trade. For religious purposes an altar was erected here, the Herculis Invicti Ara Maxima (The Great Altar of Unconquered Hercules) – which according to Dionysius – was neither grand nor splendid.

As legend would have it, two families where chosen by Hercules himself to oversee the altar – the Potitius and the Pinarii. It was therefore, a sort of private cult, conducted by priests, overseeing the sanctuary and performing sacrificial duties. In was not until 312 B.C. that the cult of Hercules took on a state-wide dimension. Since that time the courageous hero became one of the officially worshipped gods, while the priests were replaced by a state official, the praetor urbanus. Only men dressed in laurel leaves could take part in the sacrifice of ritual animas – women were excluded from cult duties. During the day of his feast, prayers to no other Roman deity were allowed.

Apart from the official celebrations of June 4th and August 12th, when thanksgiving gifts were given to Hercules, which could only be natural products (mainly slaughterd cattle), the place was visited by various businessmen – merchants and traders begging for a positive result of conducted transactions and sacrificing animals in order to achieve this goal. It was customary that this was a tenth of the profits earned from these transactions – one can only imagine that blood on the altar flowed constantly, as did the wine used during the celebrations, while the place was full of feasters, who felt obliged to consume the sacrificial animals on the spot. In this way (during important transactions) parties here lasted for several days and even months, in which hundreds of closer or more distant acquaintances of the donor took part. The Ara Maxima altar was burnt during the great fire, during the reign of Emperor Nero in 64 A.D. It was rebuilt and continued to function until the IV century. Its remains, or more appropriately a platfrom upon which it stood, can today be seen in the crypt of the Church of Santa Maria in Cosmedin. In the XV century, in the area adjacent to the temple a monumental statue of the hero was found, which is currently located at the Capitoline Museums (Musei Capitolini).

In time Hercules also started to be worshipped by young aristocrats, relating to his courage and skill in using a weapon, and even by leaders and politicians, who after victorious wars, paid him homage in the form of loot. Games and gladiator fights were organized in his honor. The first such competitions were organized in Rome, at Forum Boarium in 264 B.C.

Hercules enjoyed special popularity during the times of the Republic, when he became a patron of successful wars. It should come as no surprise that Caesar included him among his patron deities, just as Pompey the Great had done, who was initially Caesar’s friend and later his bitter enemy. Pompey’s legions fighting in the Battle of Pharsalus, used the battle cries “Hercules Invictus”, in this way putting themselves under his protection. This tradition was later taken over by Marcus Aurelius, who styled himself to be the New Hercules.

During the times of the Empire, the hero’s cult was no longer as popular as before. It should not be surprising however, - the god of the enemies (Pompey and Marcus Aurelius) could not find admiration in the eyes of Emperor Octavius Augustus, who in his place put Mars upon the pedestals. However, not for long. A true rebirth of the cult of Hercules, occurred during the Antonine dynasty, who put forth the concept of a ruler devoted to the people and the state. Hercules was a great example of such an ordinary, hard-working and moral hero. In addition his importance was further strengthened by Emperor Trajan, whom the hero was to aid in his numerous victories, while Emperor Commodus considered himself to be the second embodiment of the hero, to which images of the ruler in marble testify, depicting him with a club and a lion skin upon his shoulders, which were commonly attributed to Hercules.

Another structure devoted to Hercules, placed upon Forum Boarium, was a round, very well preserved to this very day Temple of Hercules Olivarius (Victor). Apart from that a place of his cult in Rome, was also a temple erected on the Field of Mars next to Circus Flaminius. There were also small chapels and altars spread across the city, reminding of the reverence shown by Romans to their protector.

In order to reply to the question asked in the beginning, why did Hercules enjoy such great popularity among the Romans, it is important to emphasize the universality of this figure. He was strong and courageous, but also kind and bereft of intellectual ambitions. He liked wine, gambling, good food and did not shy away from laziness, but thinking of the common good he was able to overcome his weaknesses. He was ordinary in every sense of the word, which had to appeal to the pragmatic Romans, both the general populace and the aristocracy. 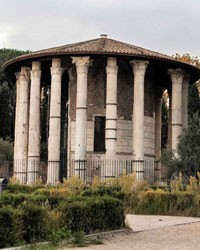 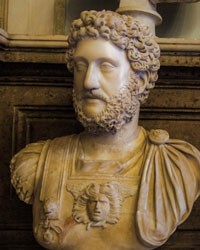 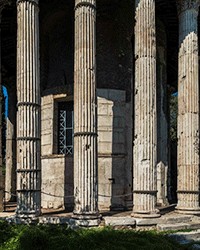 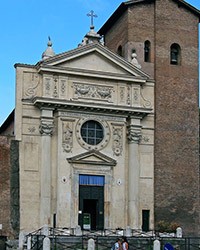 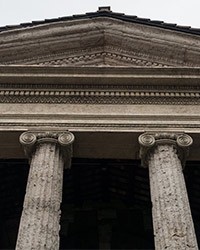 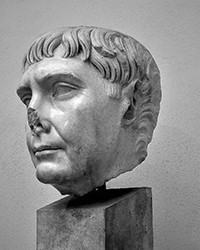