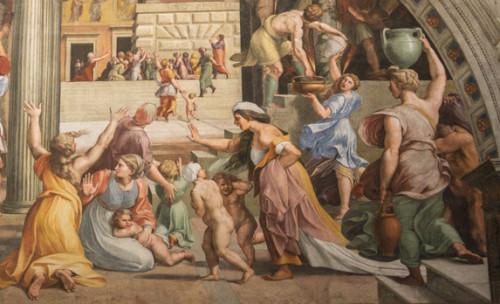 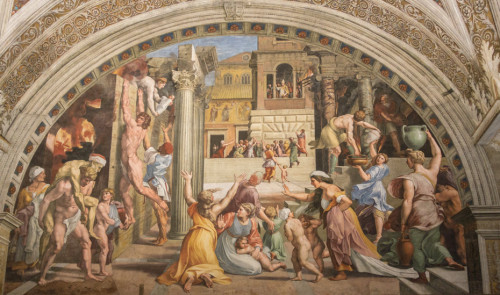 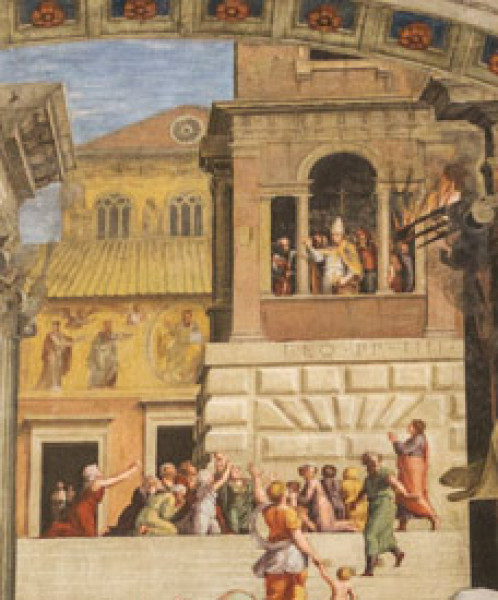 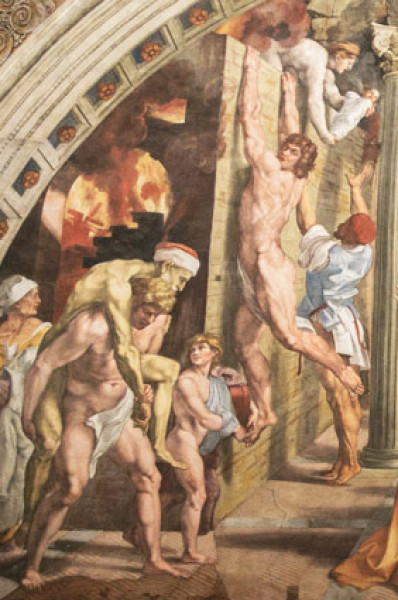 The fresco which is found in the third papal room, completed by Raphael and his students (Stanza dell’Incendio di Borgo) is known as Fire in the Borgo, and it is from this work that the apartment takes its name. With a large dose of certainty, we can say that the painting was completed with significant input from the master himself. And once again he had shown himself to be an outstanding painter, although the way of creating the scene was very different from that which the artist had shown until then. What event then, of great significance, happened at that time, that caused this work, although of exceptional quality – to seemingly – have come from a completely different artist?

The fresco which is found in the third papal room, completed by Raphael and his students (Stanza dell’Incendio di Borgo) is known as Fire in the Borgo, and it is from this work that the apartment takes its name. With a large dose of certainty, we can say that the painting was completed with significant input from the master himself. And once again he had shown himself to be an outstanding painter, although the way of creating the scene was very different from that which the artist had shown until then. What event then, of great significance, happened at that time, that caused this work, although of exceptional quality – to seemingly – have come from a completely different artist?

In order to understand what was happening at the then papal court, we may look into the letters of Michelangelo, who was a member of this court, and knew the community gathered around Raphael. The author of these letters was haunted by a constant conviction of a conspiracy, which was hatched by the great painter and the man loved by all courts and salons at Rome and the chief constructor of the Basilica of San Pietro in Vaticano, Donato Bramante, with the aim to depreciate both Michelangelo and his work. He felt ridiculed and disliked, but most of all unappreciated. And this was probably the case. The fresco completed by Raphael in the meantime, in 1508, The School of Athens (Stanza della Segnatura) was proof that its author was able to create scenes full of harmony, both spatial and compositional. This work was created two years prior to the unveiling of the breathtaking vault of the Sistine Chapel by Michelangelo. Raphael, as one of the most important people at the pope's court and the court painter, could see this masterpiece whenever he was on his way to the papal apartments, which he was constantly decorating. Independent of the admiration that his own art aroused in his contemporaries, in the vault he had to have noticed and unknown to him, attractive force. Nobody, prior to Michelangelo had painted thus, nobody dared for so much nonchalance in creating figures and space, in perspective foreshortenings, in emanating nudity of muscular male bodies, in depicting movement which seemed natural, but also in a way supernatural, as if animated by divine power. Therefore, it should come as no surprise that Raphael desired to test himself, to establish an artistic dialogue with Michelangelo, or perhaps he had just wanted to show that he can also paint so exceptionally and he is no stranger to human anatomy. As early as 1512 he had already completed a fresco in “the manner” of Michelangelo in the Church of Sant’Agostino, entitled The Prophet, Isaiah. However, due to its small size, this work did not allow him to fully spread his artistic wings. Only now, in painting The Fire in the Borgo, was he able to introduce into his vision true ferment, fear, and despair, and it is these features that are the driving force behind the new fresco. Let us look at the muscular body of a man hanging on the wall, which hangs there simply to emanate with its nudity onto the group of Aeneas with his father Anchises on his back, and his son Ascanius, who are in themselves a study of a beautiful masculine act in different periods of life. On the right despairing and terrified women, protect their children, two of them (farthest to the left), shown with pots, seem to be whipped with the ominous force of the hot wind. This is the new Raphael. There can be no doubts – both the muscular bodies of the man and women, as well as the expression and dramaturgy of this fresco, were an artistic borrowing from the divine Michelangelo. We also should not be surprised by the fact, that Michelangelo, seeing subsequent work of Raphael, accused him of imitation. He was probably right, especially since the well-liked Raphael not only managed to win over the hearts of all those who worked with him, but he also received the most prestigious commissions, those that Michelangelo could only dream of, including work on the Vatican Basilica.

The man who commissioned the frescoes for this apartment was Pope Leo X. All the four walls in a camouflaged, but obvious for the people of that time way, referenced to his political aspirations. The paintings show the deeds of two significant popes of centuries gone by – his namesakes: Leo III, when Emperor Charlemagne was crowned, and Leo IV, who is a miraculous way defeated the hordes of the Saracens and saved the Vatican Basilica from being burned down. And here we come to our fresco. The scene depicts an event, which took place in 847 A.D., in the district of Borgo, adjacent to the basilica, right behind the walls of the Vatican. As legend would have it, a great fire that erupted there was put out miraculously thanks to the then bishop of Rome. Interestingly enough, the fire in the Borgo in the painter's vision, was identical to the fire of Troy, as it was described by Virgil, which can be seen by looking at some of the actors of this drama: Aeneas, Anchises, and Ascanius. But it seems that there are also aspects hidden in the painting, relating to the de Medici family, from which Leo X came. Some scientists see the face of the founder of the de Medici family – Cosimo (referred to by Florentines as Pater patriae) in the face of Anchises, while in his grandson Ascanius they see Pope Leo himself. In the figure of the child passed over the wall, some saw Giulio, the son of Giuliano Medici (tragically killed by an assassin), meaning the cousin of Leo X and the future Pope Clement VII. In this interpretation, the protagonists saved from the fire – the Trojans (the legendary ancestors of the Romans) take on the faces of the de Medici family, in this way showing their significance and prestige. And one more important thing: the flight of Aeneas along with his father and son, the panic in the city consumed by the fire, the ancient decorations, all of that, which happens in the foreground, brings to mind memories of distant antiquity. It is antiquity, that Raphael, working as the chief Roman monuments conservator (since 1515) pays an homage to, which is an expression of the general interests in ancient Rome prevalent at the papal court. He also shows authentic elements of the architecture of the Eternal City, which he as conservator desires to save from devastation caused by time and man. As if in a theatre scenography rows of ancient columns appear in front of our very eyes – these are the existing in Raphael’s times, fragments of the Temple of Mars on the Forum of Augustus (the Corinthian colonnade in the foreground) and a fragment of the Temple of Saturn from the Forum Romanum (Ionian colonnade in the background).

Raphael as the head constructor of the Vatican Basilica also referenced the old Constantine Basilica in the painting. At that time it had already been partially taken apart, in order to make room for the new one, whose construction was started by Julius II. In the background, we will see its early-Christian façade, adorned with mosaics. Right in front of it is a loggia, from which Pope Leo IV, surrounded by church dignitaries, blesses the faithful and calms the fires, thus saving the basilica from destruction.

As we can see the fresco is a sort of a riddle recalling many different motifs. It was probably a frequent topic of discussion among humanists, many of whom were present at the court of Leo X. They spoke of the pope as the second coming of Emperor Augustus, who would initiate a time of peace and order (after the war-like Julius), but who would also open the door for a golden era of knowledge and art. This was to be a magnificent period of the triumph of justice, bringing with it – under the auspices of the pope – hope for the future in the spirit of humanism. Antiquity seemed like an ideal foundation on which Christian culture should develop. As it would turn out, all the lofty words of humanism and a golden era, a fascination with antiquity and its beauty would be questioned, while these ideas would soon fall into pieces, along with the spread of the ascetic Lutheranism. In reality, this would mean a flight of the pope from the Vatican and a barbaric sacking of the city in 1527, by Lutheran landsknechts (Sacco di Roma). Ten years after the painting of The Fire in the Borgo, they would enter the papal apartments and damage the frescoes found within.

As far as art it is an incohesive work. Some scientists claim, that this was due to the three pairs of hands which created it. And thus, Raphael was to be the author of the whole concept of the painting and certain details in the background (the face of the girl handing a jug of water, the face of the pope, and those of some of the faithful). All the rest was supposedly the work of Giulio Romano (the left side and part of the right), as well as Gianfrancesco Penni or Giovanni da Udine (central part). Other researchers believe that Raphael played a greater role in the creation of the fresco. Regardless, it became a veritable treasury of iconographic motifs, which would be enthusiastically used by artists of future eras. 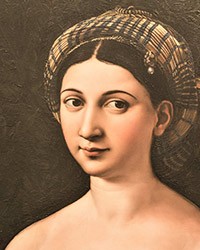 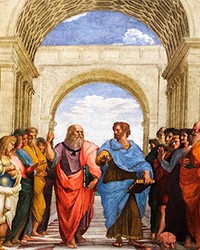 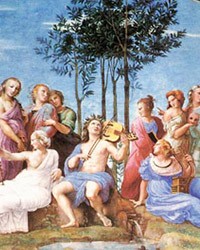 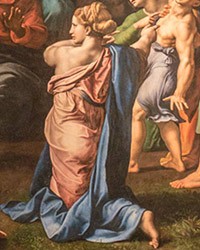 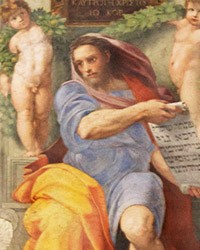