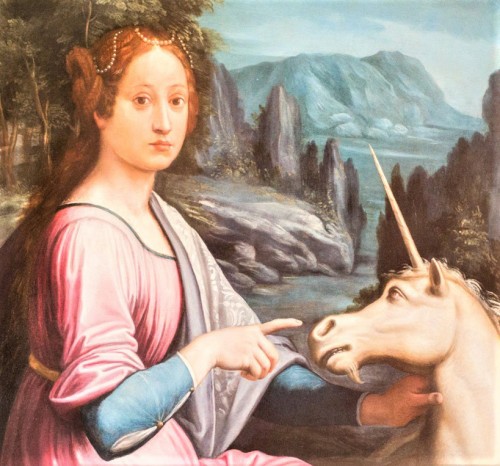 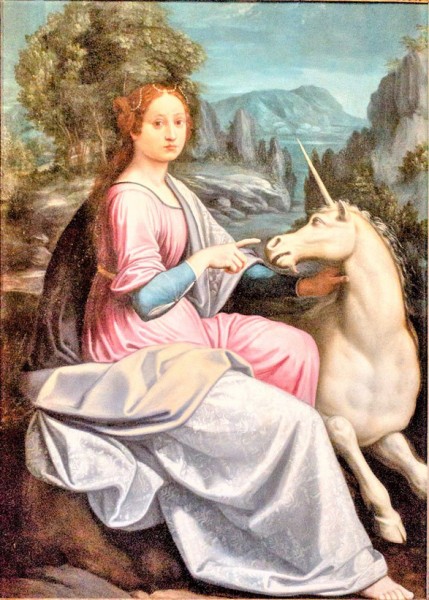 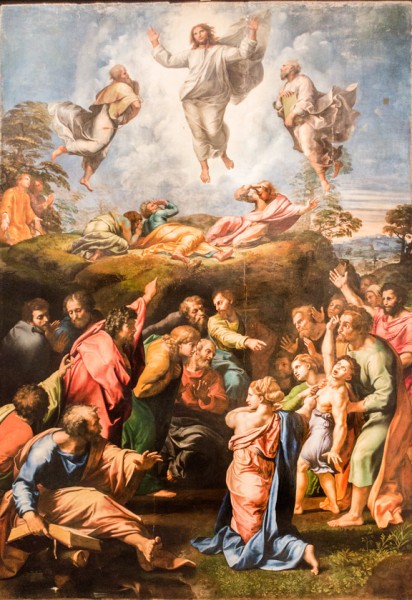 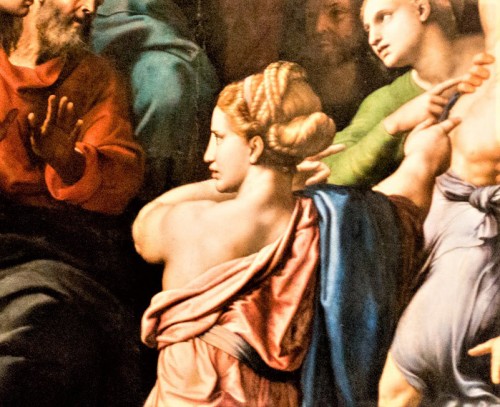 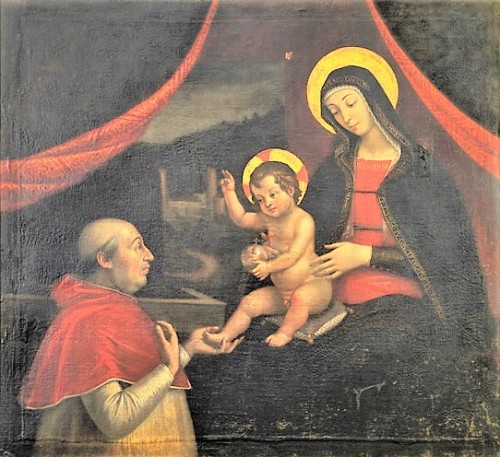 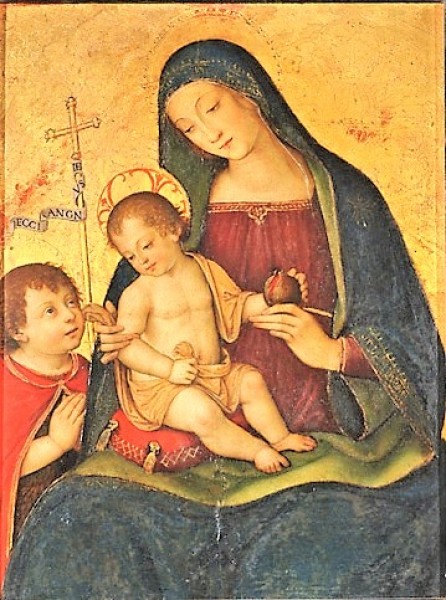 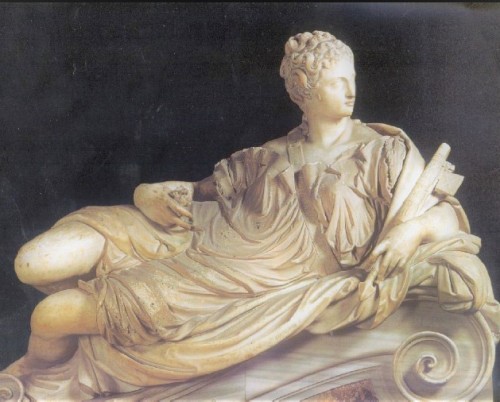 Allegory of Justice from the tomb of Pope Paul III, Basilica of San Pietro of Vaticano

Although Giulia came from an old family, her father Pier Luigi Farnese (the Elder), the lord of the Capodimonte Castle, not far away from Rome, was neither rich nor well-known. Giulia had four brothers and as was fit for a girl, she was educated at a monastery, where she learned things fitting for her position and gender. One of these was probably marital fidelity. Let us remind ourselves that in the times of which I speak, even if a woman was suspected of marital infidelity it could have ended in her death. Of course, these rules did not apply to men.

When Giulia’s father had died (1487), the two eldest brothers inherited his fortune, while two years later Giulia herself at the age of fourteen, was married off to an aristocrat, which had been arranged for her since her birth, Orsino Orsini – a youth who was but a year older than she. He suffered not only from boils, which deformed his body, but   also wore an eye-patch, which did not make him any more appealing. Orsini’s mother, Adriana de Mila, was the cousin of the influential in Rome, fifty-seven-year-old papal Vice-Chancellor, Cardinal Rodrigo Borgia, and it was in his palace (not far from the Campo de Fiori), that a banquet was organized to celebrate the wedding of the bride and groom. We do not know if the slender and very beautiful girl had already then been the cardinal’s lover or was it only at that time that she caught his interest.

The Farnese and Orsini families probably counting all their losses, including blemishes upon their honor, shame and other ethical inconveniences, came to the conclusion that the cardinal’s romantic interests are quite beneficial for both families. Both the widows, meaning Giulia’s mother, Giovannella Caetani and her mother-in-law, Adriana de Mila, counted on moving the careers of their children forward at the side of the powerful vice-chancellor. Therefore, the cardinal entrusted Adriana de Mila the responsible task of caring for his loving daughter Lucretia, conceived from his relationship with Vanozza Cattanei. During his visits he was able to see both her, as well as his new love – Giulia, who from time to time visited her mother-in-law. Both the girls – the pope’s daughter and Giulia quickly became friends, while the family’s idyll was not even interrupted by Giulia’s pregnancy.

In 1492 two significant events influenced the life of the entire family – in August cardinal Borgia was elected as pope taking on the name of Alexander VI, while in November Giulia’s daughter, Laura was born, who officially  was the daughter of Orsino Orsini, which cannot be discounted, since the very family-oriented cardinal did not acknowledge his fatherhood. Most historians however, doubt the sincerity of his declarations. Perhaps the reason was the post he held – Laura would have been a child born after he had ascended to the throne of St. Peter, and this would be a whole other matter than having children while he was a cardinal. At the time when morality was treated rather loosely even Borgia did not want to ridicule the position which he had occupied, despite the fact that he did not want to weaken his relationship with his lover, on the contrary he intensified it. Giulia left the residence of her husband in Bassanello and came to live in Rome becoming an official lady-in-waiting for Lucretia. Her husband, initially oblivious to his situation, when he became aware of it, found consolation in his career, apanages and posts, which he all received. Although it must be admitted that he did not agree willingly to this situation. However, the greatest benefits were enjoyed by the Farnese family. The pope was ready to fulfill all Giulia’s wishes including those upon which her whole family counted. At the age of 25, in the year 1493, Giulia’s brother Alessandro (the future Pope Paul III), was elevated to the position of cardinal. And despite the fact that he had to suffer through all the gossip that his position was the result of the underskirt of his sister (and this was the most decent euphemism), he dealt with it courageously, ascending the ladder of a Church career.

In the meantime the exquisite and fresh beauty of Giulia, her elegance and charm aroused widespread admiration. She was described as a black-eyed, black-haired beauty with long hair, a round face and a delicate pearl complexion. Her brother-in-law, Lorenzo Pucci in one of his letter, wrote that he had never seen something as beautiful and looking for the proper words to describe her, he hopelessly concluded that Giulia truly “looks like the sun”. The pope himself not only allowed her to visit the Apostolic Palace frequently, participate in official celebrations such as the wedding of the pope’s daughter Lucretia, but also entrusted the then decorator of the papal apartments, Pinturicchio to immortalize her as the Madonna above the enterance to one of his chambers (Madonna delle mani).

In 1493, Lucretia Borgia went to Pesaro, the home town of her husband, Giovanni Sforza, and Giulia went along with her, most likely to make up for the pope’s daughter leaving Rome which was full of all kinds of amusements. She remained there longer than her lover, the pope could cope with. Oblivious to the pope’s requests for a quick return, she visited her dying brother and remained in her hometown of Capodimonte longer than she should have – at least according to the opinion of the bishop of Rome, who had lost all patience, especially when he found out that her husband left alone in Bassanello also required that his wife visit him. The letters of the Holy Father, written to all the perpetrators of this situation, meaning Giulia’s mother-in-law, her brother Alessandro, but also her husband – Orsino Orsini are filled with longing and jealousy and are in truth quite touching. In them he reminds everybody of the benefits which they all obtained thanks to him (including the cardinalship for Alessandro), accuses them of ingratitude and finally filled with immeasurable grief threatens all the involved with excommunication and confiscation of all property unless Giulia immediately return to Rome.

What a temperament, desperation and suffering of an “abandoned” man we could say. The repentant Giulia, called in a letter directed to her “ungrateful and perfidious” finally decides to return, when on her way back to Rome, suddenly in front of her – as if in an adventure film – the French armies of Charles VIII which were at that time stationed in Latium, appear out of nowhere. Giulia, her mother-in-law and her sister, Girolama are in an elegant way stopped and locked away in the Castle Rocca dei Papi in Montefiascone, until a suitable ransom is paid by Alexander VI, in the amount of three thousand ducats. The ransom arrives with lighting speed. Giulia is free, while the malicious ambassador of Ferrara writes that the pope would have paid even 50 thousand ducats to have his lover returned to him as quickly as possible as she “is everything to him – a heart and soul”. We must then imagine the triumphant entry of Giulia to the Eternal City. A true knight comes out to greet her, a liberator, almost a hero – the pope dressed in black embellished with gold, secular robes, made according to the most modern fashion, with a sword and a dagger at his side. As we can imagine, the longing lover forgave Giulia all her transgressions.

The lovers separated around the year 1500 and we do not know what was the cause. It most likely was not Giulia’s age, since according to chroniclers she kept her charm. In the year 1500, Giulia’s husband died in his sleep, as the ceiling fell upon him, while the pope himself bid farewell to the world three years later. Giulia was thirty years old and for the first time she enjoyed freedom. In 1506 she married off her thirteen-year-old daughter Laura to Niccolò della Rovere – the nephew of Julius II, the successor of Alexander VI on the papal throne in this way putting her among the Roman elite. Three years later the former papal mistress married once again, this time to a Neapolitan aristocrat with whom she spent eight years. After his death, she occupied herself with taking care of her fortune, which was later inherited in full by her daughter Laura. Her brother, who did all he could to hide her existence, being ashamed of the fact that she was the sole reason that he had become a cardinal, she gifted with her decorative bed, probably reminding him how exactly he acquired all his wealth and prestige. Giulia spend the last two years of her life in Rome, however she did not live to see her brother ascend to St. Peter’s throne. We also do not know where she is buried.

For centuries the imagination of those interested in Giulia was aroused by the burning question why even the smallest portrait of the beautiful woman did not survive until the present. Perhaps this was the doing of her brother the cardinal and later Pope Paul III, who could have purposefully destroyed all images reminding him of the infamous role played by his sister, to which he owed his career. Historians search for her portrait in the allegory of Justice from the tomb of Pope Paul III, but most likely only because the sculptor Guglielmo della Porta created it (as was fit for an allegory) half naked and so filled with eroticism that it had to be covered (approx. 1600) with a metal garment since it moved youths stopping in front of her to commit almost sacrilegious deeds.

The idea that Giulia is depicted in Raphael’s Lady with a Unicorn had been discarded a long time ago, while the hypothesis that Giulia’s visage can be found in another of the artist’s paintings – The Transfiguration – is met with equal skepticism. The only confirmed by Giorgio Vasari image, which has been discovered in recent years is the aforementioned portrait of Our Lady in the lintel of one of the apartments of Alexander VI.

People still search for her visage in the numerous images of beautiful women created at the time, trying to fit the description of the black-haired and delicate Giulia to each of them. Perhaps Cinderella will speak once again, while history will provide us with her real portrait. 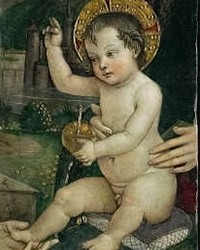 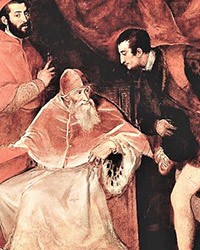