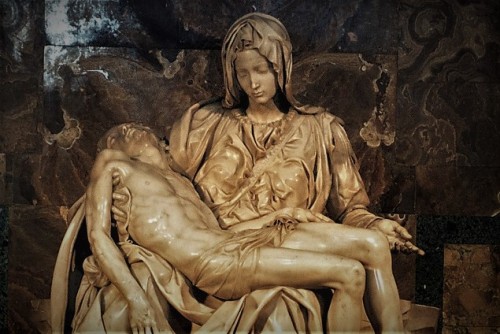 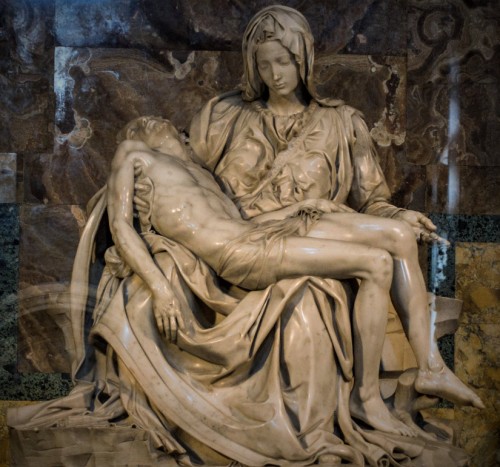 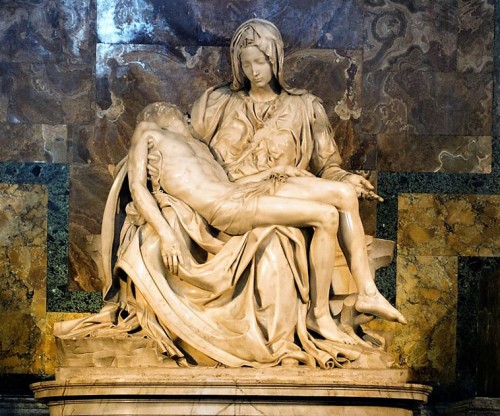 First let us familiarize ourselves with the history of the creation of this outstanding work and the moment of the arrival of Michelangelo to the Eternal City. This occurred in 1496, while the circumstances of the appearance of the twenty-year old sculptor did not put him in favorable light. He was called into the court of one of the leading patrons of art, Cardinal Raffaele Riario, in order to explain, how it came about, that the cardinal was a victim of a fraud, in which Michelangelo played a leading role. In times of fascination with ancient art, and the discoveries of ancient statues found below the ground at every step, there were also a number of sly middlemen, dealing in treasures, which were not necessarily ancient. One of these was the statue of Sleeping Cupid (lost), which was only to imitate an ancient artifact, when in reality it was sculpted and artificially aged by Michelangelo. Perhaps, the young artist wanted to get rich quickly and in addition prove that he was able to create works of art, which were equal to ancient ones. The statue was purchased by the aforementioned cardinal Riario, who when the  deception was revealed, demanded that his money be returned yet looked with interest upon the skilled sculptor. The issue was dealt with so amicably that Michelangelo remained in Rome and created another “ancient’’ figure for cardinal Riario – Bacchus. However, this statue quickly came into the possession of the banker Jacopo Galli and it was thanks to him that the young artist received a commission, which was to immortalize his name for centuries. It was not especially spectacular. The sculpture that was ordered, was to adorn the funeral monument of the cardinal and the ambassador of the King of France at the court of Pope Alexander VI  – Jean Bilhères de Lagraulas. The artist promised to complete a sculpture showing the Lamentation, for a sum of 450 gold ducats, of such beauty which would surpass anything that had ever been created in the city. The intermediary – banker Galli – vouched with his name, that there is nobody else in Rome who could create a more exceptional work.  It looked like quite a challenge, yet Michelangelo succeeded in accomplishing what seemed to be just boasts of a young man. Unfortunately, the cardinal did not see the work finished. He died and was buried in the Vatican Basilica, in the Chapel of St. Petronilla, which had for ages belonged to the French – and that was where the sculpture of the young artist was placed, immediately causing admiration. Crowds came to see the outstanding work and did not hide their amazement. Perfection of execution, outstanding modelling, harmony and gestures, so inconspicuous yet so convincing, attracted attention, even more so because it was not an ancient work, but thoroughly Christian, whose content was known by everybody even if he or she was not familiar with Catholic iconography. Suffering and grief are universal, especially when it comes to losing a child.

The delicate, almost girl-like figure of the Virgin Mary and the lifeless, yet still beautiful body of Christ, were for the contemporaries of Michelangelo a revelation, but also proof of the most outstanding ability. The artist used a topic which was unknown in antiquity, yet popular in medieval culture, especially north of the Alps – the pieta. However, as opposed to his predecessors he did not want to emanate suffering and verismo in depicting the characters. His Virgin Mary is a beautiful, young woman rather than an old matron with a wrinkle-filled face, as she was generally presented. Why is the Madonna so young? The answer is not simple. Perhaps the artist had wanted in this way, to combine purity with youth or perhaps, as some claim, he was inspired by verses of Dante’s Divine Comedy (“O Virgin Mother, daughter of thy Son”), who called Mary the daughter of Christ, since we are all his children. Christ on the other hand, although dead, is by no means less beautiful than ancient heroes. We can see his muscles, veins and tendons. His body is bereft of signs of suffering, the wounds on his hands, feet and side are barely visible. However, that is not the only novelty introduced by the artist. In actuality, he created a group which is completely disproportionate. After all, how can an adult male fit on the lap of a slender woman? In medieval pietas we see the great problems it caused for sculptors and painters.   Here Michelangelo changes proportions – the body of Christ in comparison with the figure of the Virgin Mary was shrunk, through which an ideal balance was achieved between the two figures, but also something more. Mary is able to hold her Son’s body, as if he were an infant, with only one hand – with the other she is making a subtle gesture that is full of resignation – as if submitting herself to the will of God. We will not see her face torn by grief, which was always shown in medieval pietas – only silent pain, visible in this one gesture of a raised and semi-open palm. For the very religious artist, the beauty of human body was a reflection of divine power and divine form, which he was able to capture here, for the first, but not the last time.

When we look at the Madonna’s sash, on it we will notice an inscription “Michel Angelus Bonarotus Florent Facibat” (Michelangelo Buonarroti, Florentine, made this. This is a rather unusual way of commemorating one’s name, later it will never appear on any of Michelangelo’s works. Reportedly an impulse, which convinced the artist to do this, was the fact that the sculpture was constantly, by mistake, being attributed to another artist – Cristoforo Solari.

In subsequent centuries, The Pieta often changed its location, to finally, in 1748 be placed at the enterance to the basilica, where it can still be seen today. It is known by all (or nearly by all), it amazes in direct contact especially due to its small cubature, perhaps because we expect works of great size from the Florentine artist and have grown accustomed to them. This one here seems intimate, if not to say “small”.

And what of Michelangelo? Made famous for being the greatest Italian sculptor, he returned to Florence, to face another important commission. This time it was the statue of David. However, he soon returned to the Eternal City and for decades his life was connected with it.

However, that is not the end of the story of this sculpture, which today is tightly covered with an armored glass. This was done for a reason. It is difficult to understand a madman, who in 1972 yelling “I am Jesus Christ” with strikes of the hammer destroyed the masterpiece. He damaged the Virgin’s face, completely hacked off her arm, as if adding  to human suffering another dimension, of suffering of the material, in the past a pure block of marble, carefully chosen by the ingenious artist and for months transported from Carrara to Rome. Today the Pieta, carefully restored and put back together, with visible marks of its injury is even more convincing and amazing. 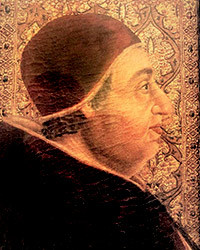 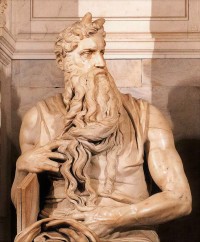 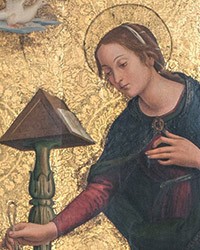