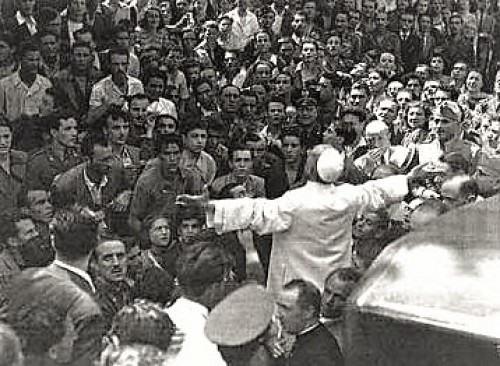 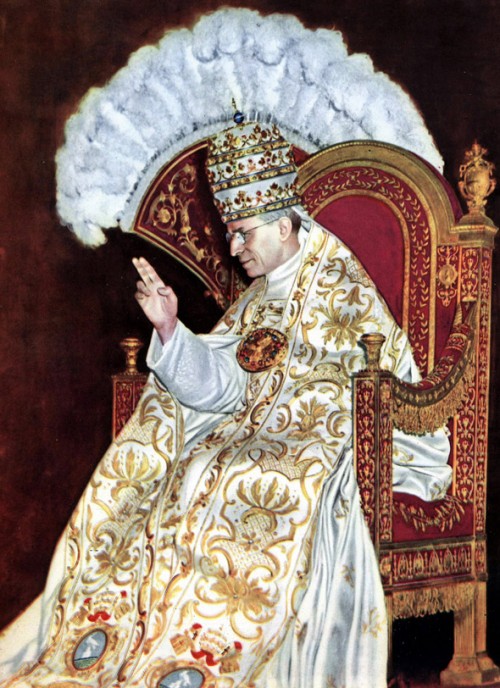 Pope Pius XII during the celebrations inaugurating his pontificate in March 1939, pic. Wikipedia 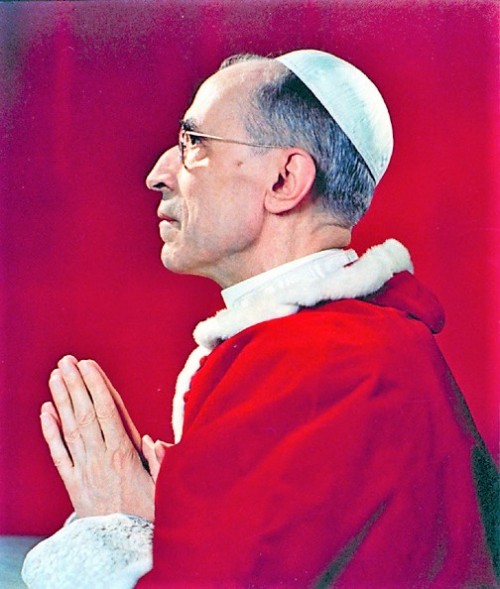 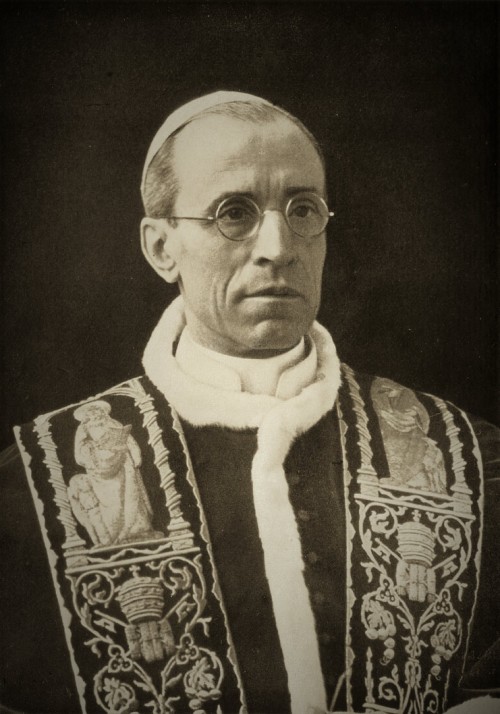 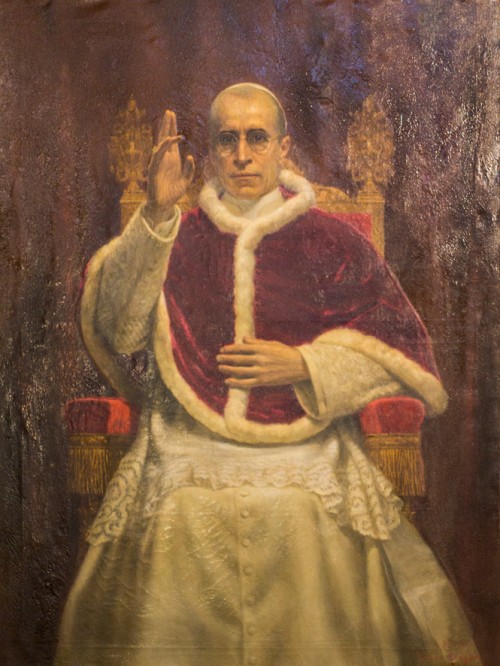 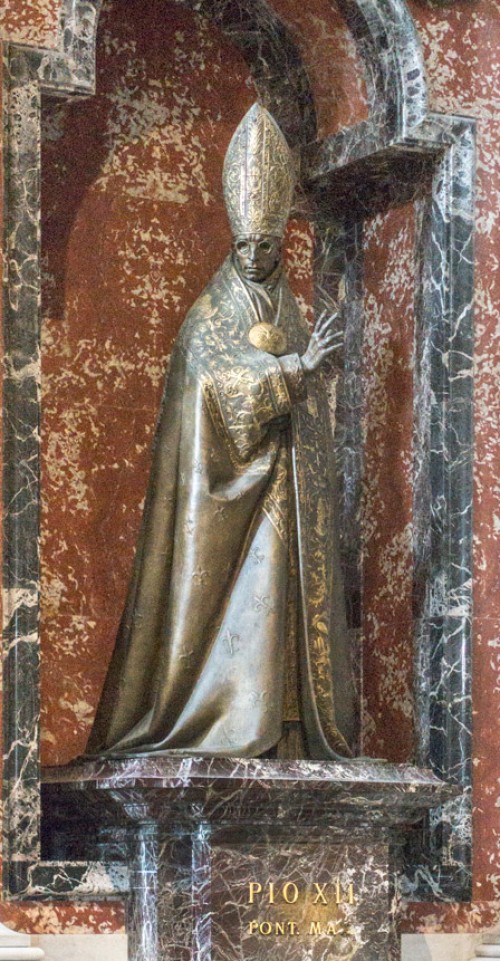 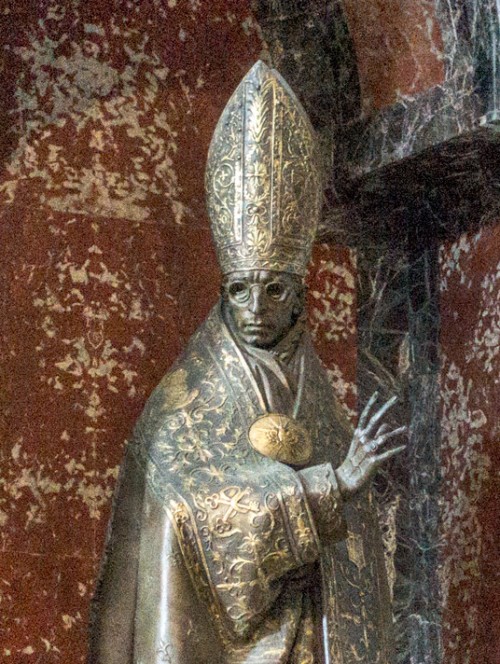 Such a picture of Pius XII coming with words of consolation and blessing, will remain in the memory of the inhabitants of the Eternal City and persevere for subsequent decades, despite criticism. What was its cause? The fault of neglect and silence in face of the murder of millions of people – Jews and Roman Catholics. Still today this wartime pope arouses extreme emotions. Why did he choose to remain silent? In order to understand this, we must look back at the beginning of the career of Eugene Pacelli, a clergyman diplomat born in Rome, who in 1917 became the Apostolic Nuncio of the Holy See in Munich, where he personally experienced the Communist revolt (1917), then in Berlin where in turn he got to know the weakness of the Weimar Republic, torn apart by a crisis and the conviction of the elites which surrounded him of a worldwide, Jewish-Communist conspiracy. Pacelli also lived through Hitler’s coup d’état in 1923 and writing to the then pope Pius XI about Nazism, claimed that it is “perhaps the most dangerous heresy of the present times.”

Ultimately in 1929 Pacelli left Germany and became a trusted advisor of the pope, to then a few years later, in 1933, become the chief creator of the concordat between the Holy See and the German Reich governed by Hitler. For Hitler the concordat meant prestige, proof of official recognition by the Vatican and the civilized world of the actions of a National Socialist state and support of the Roman Catholic community for NSDAP. For the pope it provided an opportunity to care for German Catholics. However, the price which he had to pay was great indeed; the political neutrality of the Church, which was very beneficial during times of peace, in times when the breath of the impending war was already felt in Europe, was a sort of a gag voluntarily placed in one’s mouth.

In March 1939, after three-day talks, the conclave elected cardinal Pacelli as pope. Pius XII, since that is the name he took on, was at that time 63 years old and had one of the most difficult pontificates in the history of the papacy ahead. Five months later Germany attacked Poland, while the pope remained silent and only in two weeks appealed for just peace between the two states. He seldom seemed to admonish the German nation about the matter of the genocide of Jews, although he was a lot clearer during the Christmas speech of 1942 when speaking about the equality of nations and races in the face of God, which immediately caused a reaction of the Germans, threatening   repressions against not only Roman Catholics but the pope himself. In June of 1943 the pope sent his Apostolic nuncio in Berlin to Hitler, asking about the fate of Jews, which only aroused the fury of the chancellor of the III Reich.

A month later allied bombers descended upon Rome, while the crows surrounding the pope on the city streets shouted: Pace! (Peace), but also Aiuta! (Help). The situation of Pius XII became more and more dramatic, when a week after the signing of armistice with the allies by King Victor Emanuel III, on the 10th of September 1943 SS and Wehrmacht regiments entered Rome. For Romans this meant the start of a period of terror. The king escaped from the city, while the only protector left was the fearless pope, who had no thoughts of abandoning his post, despite the risk of kidnapping and the occupation of the Vatican by the Nazis, or perhaps its bombardment. Just as hundreds of years prior, Pope Leo I, the current pope also had a sense of mission and duty in the struggle against barbarism, which happened right in front of his eyes in the Eternal City. In the middle of October 1943 around one thousand Roman Jews captured in the old ghetto or taken from numerous areas of the city were put into wagons and taken out. As it turned out later, from transport X70469 which had entered the Auschwitz concentration camp on October 23, only 15 people returned. The only woman who survived, Settimia Spizzichino, accused the pope after many years, that he had not saved a single child during these tragic days on the Tiber, yet “he could have done so without any risk”. Did he truly not do anything?

When he learned about the capture of Jews, he sent his Secretary of State Luigi Maglione, to the German ambassador at the Vatican, Ernst von Weizsäcker, with a request to put a stop to it. The ambassador merely suggested that the pope’s official protest may cause unfavorable repercussions for the Church. The pope remained silent but he was not inactive towards those who managed to escape and who sought help. He ordered enclosure to be lifted from convents and monasteries   and he opened up parishes and churches to Jews, not only in Rome, but also in all of Italy. In offering asylum the pope broke neutrality of the Holy See. According to calculations of researchers nearly 4500 Jews were hidden away and saved at the time. The Salvatorian Pankratius Pfeiffer (“Angel of Rome), also served as an intermediary in unofficial contacts between Pius XII and German authorities in the city. Thanks to his efforts many people were released from prison, and some of them were hidden in the building of the convent of Salvatorian Fathers. The humanitarian aid campaign for those in hiding was managed by Pascalina (Josefina Lehnert) – a German nun from the Congregation of the Sisters of the Holy Cross, who had accompanied Pius XII since the moment of his nunciature in Munich. In time she became a person with whom he shared his problems, his guardian but also one of the most powerful figures in the Vatican.

For the pope it did not matter who needed help – whether it was Jews, or deserters, or recent oppressors – it was only important to save lives, although it was not always possible. As a result of bombings by allies, who did not respect Vatican neutrality, over 500 people were killed in the pope’s summer residence of Castel Gandolfo in February of 1944.

Thanks to secret talks between Pius XII and the German leadership present in Rome, the Nazis left Rome without firing a single shot. After American armies entered Rome on 4 June, 1944, crowds of Romans once again took to the streets. Some of them greeted soldiers who with them brought hope that the war would soon end, but most of them directed their steps to St. Peter’s Square, to express their gratitude and thank God for the miracle, which was taking of the city without any casualties and damages. And once again under the pope’s wings protection and help (quite often in the form of escape to South America) was given to those who this time hid from the allies.

How then should we interpret the pope’s actions, who while he remained silent, clearly helped? Pius XII was most likely a Germanophile and a great enemy of Communism. For a long time he had hoped for reconciliation between Hitler and the allies and a common front against Stalin. He was also convinced that words by themselves may bring more harm than good, when in August of 1942, the Nazis had killed 40 thousand Jews, as a response to a protest issued by Dutch bishops, who publicly opposed  the persecutions of their elder brothers in faith in the Netherlands. Nevertheless, in judging the pope’s actions, the rabbi of Rome, who after the war converted to Catholicism, Israel Zoller, unequivocally claimed that as one of the few people in power at that time the pope reacted to the tragic faith of Jews in a heroic, merciful and effective way

After the war had ended, the pope still governed in the Vatican for another fourteen years. He was the one who initiated excavations below St. Peter’s Basilica in search for the tomb of Peter the Apostle, whose discovery was announced in the Jubilee Year of 1950. When he died eight years later, Romans once again took to the streets, in order to accompany him on his last earthly journey.

After the war admired, at the beginning of the 1960s Pius XII became an object of increasing criticism, while the epithet “Hitler’s pope” stuck with him for decades. In opposition to all this, in 1965 the Church began his beatification process, although after nearly four decades in was halted in 2007 by Benedict XVI. His canonization was vehemently objected to by numerous Jewish communities, while the pope fully aware of the fact of how this issue would influence dialogue with Judaism and the state of Israel, discontinued further steps. As of today Pius XII remains a Venerable Servant of God. 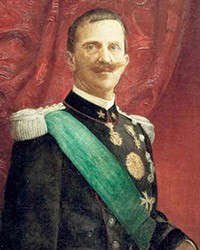 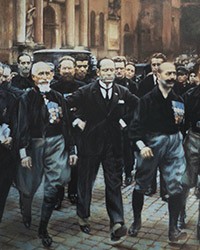