Caravaggio’s Madonna of Loreto - the sanctity of dirty, coarse feet 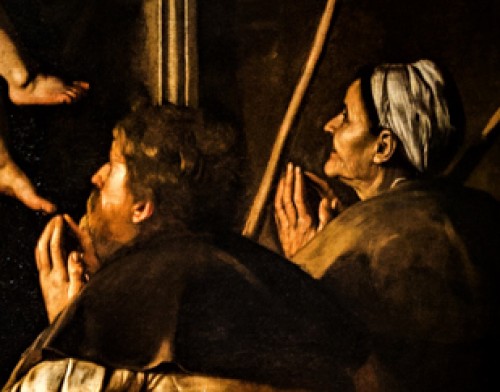 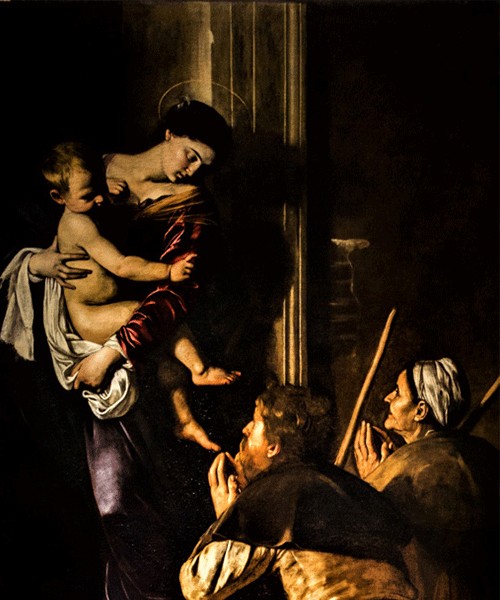 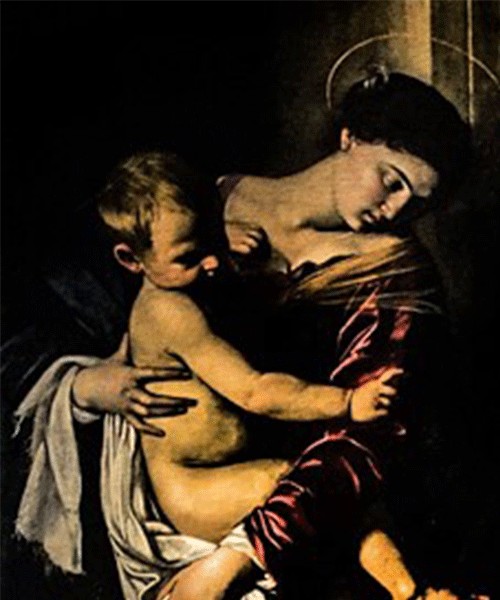 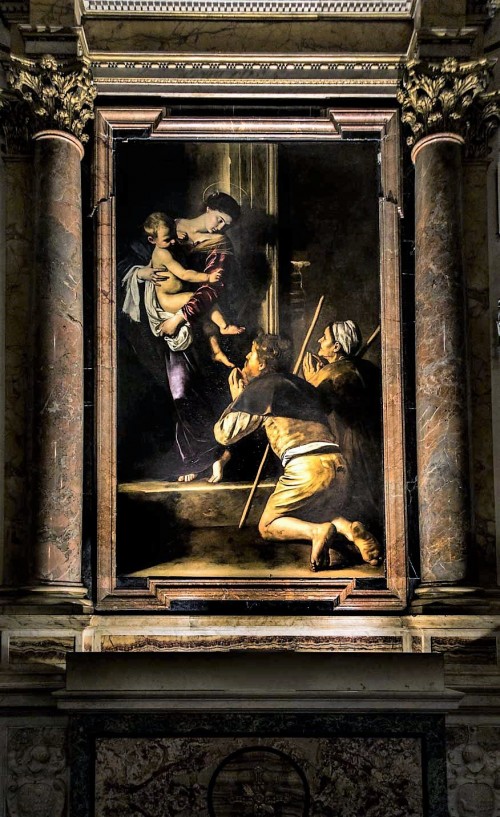 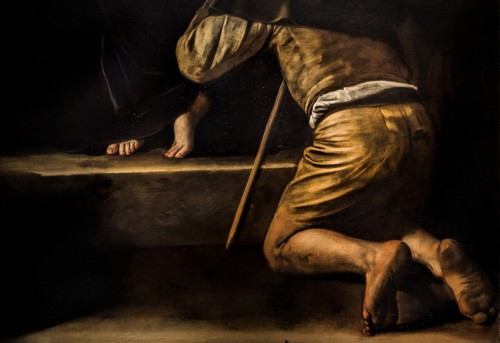 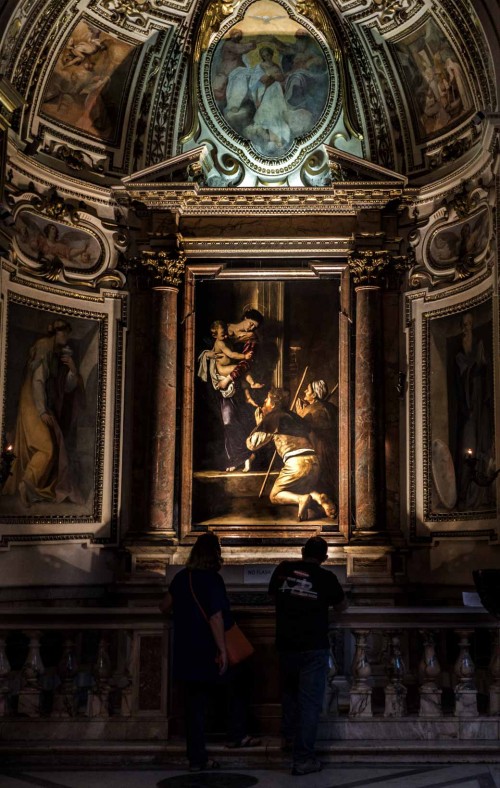 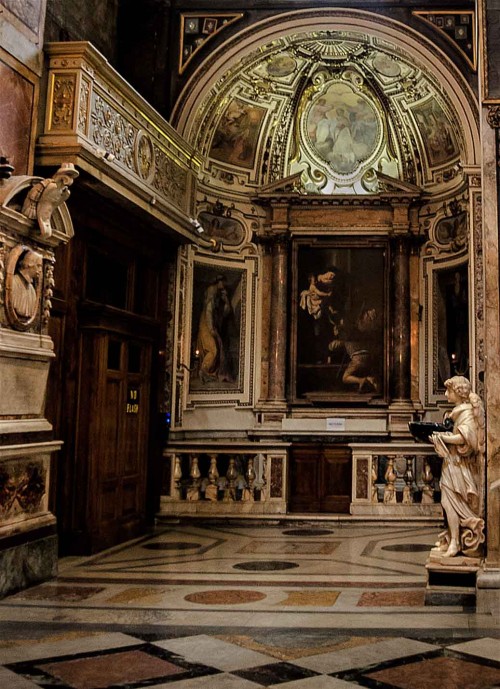 Our Lady of Loreto attained a cult of international proportions thanks to the Jesuits who came there in the middle of the XVI century. In 1587 the façade of the basilica, inside which this miraculous home of Mary was located, was completed. Pilgrims came to ask and pray to Mary for intercession in illness and suffering. The pilgrim movement to this location increased from the moment, when a rumor appeared that English Protestants known for their dislike of the Madonna, had decided to steal the treasures located there. On the other hand since the Jubilee Year (1600) thousands of pilgrims continuously came to Rome, and on their route to St. Peter’s Basilica (San Pietro in Vaticano), they also came across a less frequented Church of Sant’Agostino with a miraculous statue of Madonna and Child by Jacopo Sansovino. And it was for this church, that a painting was commissioned from Caravaggio, of which the main topic was to be the near and dear to the heart all pilgrims Madonna of Loreto. His clients were the friars who resided by the church, working on behalf of the church funders, meaning the Cavalletti family.

In the painting Mary accepts homage from pilgrims with common, sun-burnt, filled with effort faces. Standing on the threshold of a simple, poor house, she is showing her baby to the wanderers, looking on at the kneeling men expressionless, as if she was preoccupied with her own, it seems unhappy thoughts. She does not look like a saint, but rather like a woman who is nearby, at hand’s touch, perhaps a tired, lonely mother. The distance between her and the poor is short. She is not separated from them by monumental stairs, clouds, pyramids, pedestals, or obstacles, which were typical in the paintings of that time, where the adoring poor appeared only in the form of a distant background. Caravaggio’s Virgin Mary appears as a ghost in a dark Roman alley, surprisingly and unexpectedly, yet it is obvious that the poor still see in her the object of their love and adoration. They do not need churchly pompousness, the shine of candles, and interiors filled with gold, in order to see in her, their advocate and consoler.

The artist was inspired by a well-known to him smell and view of a Roman street filled with pilgrims, but also beggars, vagabonds and seekers of a better life, stretching their hands to each and every pedestrian, pulling at the cape of every better-dressed passerby, throwing themselves at a carriage, hoping that its owner would throw them a couple of coins for the sake of peace and quiet. Especially during the celebrations of the Jubilee Year, crowds of the sick, wailing,   dirty and poor, camped out in front of every church. These were the people Caravaggio saw walking the streets of Rome and they were the ones he put upon altars.

The idea of charity and love of one’s brother, as well as the need to give alms to the poor by the rich, meaning the virtues promoted by Philip of Neri, at the beginning of the XVII century lost their popularity in the new epoch even in the center of the Church itself, which was also reflected in the perception of Caravaggio’s work, although this was probably not the decisive factor in the clients’ evaluation of the painting. Camillo Borghese (Paul V)was elected to the throne of St. Peter, and in comparison with the severe and devoted to matters of faith Clement VIII, he practiced a more “temporal” policy. Even as a cardinal in 1603, he ordered all wanderers and street vagrants to abandon the city. These were the times, when dirty, coarse feet and rags on the back did not motivate one to be charitable – just the opposite: the rough figures from the canvas of Caravaggio raised, as his biographer Giovanni Baglione wrote „extreme ire”. And of course the clients themselves also expected something more lofty, nobilitating the church, rather than an image of its poorest members. The painting, it was claimed, distracted and shocked by such an uplifting of the little with dirty feet. If that was not enough, in the visage of Madonna the image of Magdalena Antognetti was seen, the model of the painter, but at the same time a woman well-known to men seeking sensual pleasures in Rome. Lena, since that was what she was called, is standing at the threshold of the house (this Loreto house), but in the very same doorways on the streets of Rome, stood other, numerous, encountered at every step women – not saints but sinners. Is Caravaggio’s message really so blasphemous? Did he want to show that the alleys of Rome are full of mysteries and that more than one sinner, or a woman thought to be as such, carries inside her the light of holiness? A very significant, but little-known evidence seems to point to this very fact. The Church of Sant’Agostino (but not only) was in the XVI century, of which Pietro Aretino informs, a place which was often visited by Roman prostitutes, of course for religious purposes. On the other hand, the chapel, which was to be adorned by Caravaggio’s painting, in previous centuries belonged to the Casini family from which the renowned courtesan of the end of XVI century – Fiammetta Casini, came. It was thanks to her donation and patronage that a richly decorated in frescos chapel was completed (Cappella della Pieta), adorned with a paiting depicting the scene of the Lamentation with St. Mary Magdalene in the background. In the beginning of the XVII century this chapel was taken apart and entrusted to the Cavalletti family.

When Caravaggio presented his work, the monks from the Church of Sant’Agostino were shocked and appalled, while the family who commissioned it, had absolutely no intention of paying for it. In the end however, the painting was kept, while the whole matter was put to rest. It was probably not thought that in several centuries, it will be one of the greatest treasures of this church, a painting attracting throngs of pilgrims, albeit not those seeking sainthood, but admirers of Caravaggio’s talent. 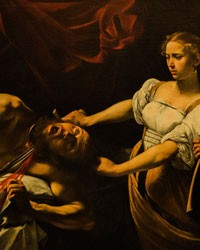 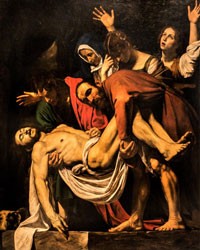