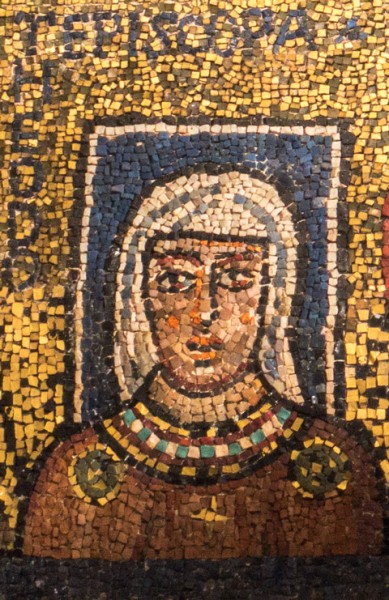 Image of the matron from the IX th century - Episcopa Theodora - mosaic in the Basilica of St. Praxes in Rome 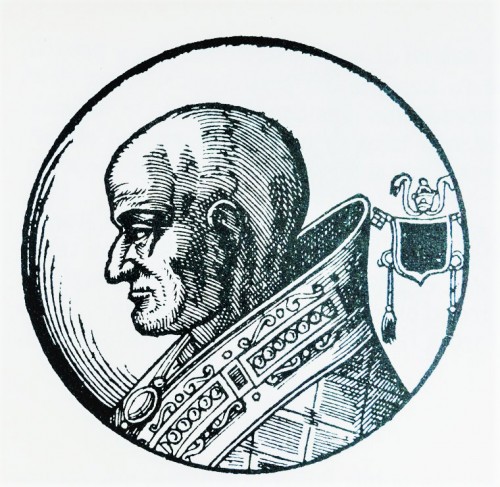 We do not know exactly when she was born, but she came to be remembered in history thanks to her marriage with Theophylact I of Tusculum, whose significance and influence at the end of the IX century gradually increased in the city on the Tiber. Just how great this influence was, and how strong the family can be testified to by the fact, that subsequent descendants of Theodora the Elder and Theophylact sat upon St. Peter’s throne in the X and XI centuries, and there were five in total.

Interestingly enough, the chronicler, whose narration is the main source of our knowledge about those times, Bishop Liutprand of Cremona, marginalizes the role of Theophylact and tells us of Theodora as if she was the one playing the main role in the political games of those decades. According to him the beautiful black-haired woman with great black eyes led to the return of Sergius to Rome and then placed him upon St. Peter’s throne in the year 904. She was to be his lover, similarly to her equally lustful teenage daughter Marozia. Liutprand of Cremona also quite clearly speaks of Theodora procuring her daughter in order to gain some influence over the pope. When Sergius III died (911), Theodora led to the election of new favorite popes – first the brief pontificate of Anastasius III and then the even briefer of Lando, to finally provide the papal tiara (914) for another one of her lovers Pope John X. As Liutprand of Cremona writes: “Like a harlot she forced him to abandon his bishopric and take – what a horrible crime ! – the Roman papacy.”

I do not know what was Theodora’s real influence on the selection of the then popes, while we have no information on her promiscuous sexual life other than epithets, with which she was willingly  described by chroniclers both in the Middle Ages as well as Modernity. However, we do know, that their knowledge came from one, rather “poisoned” source, meaning the reports of the previously quoted Liutprand. Today we treat his texts created at the court of Emperor Otto I as rather dishonest and directed mainly against the then papacy and the families from Spoleto and Tusculum, meaning the nobles who held all the power in   Rome at that time. However, through centuries the words of the imperial propaganda writer were repeated, also by the representatives of the Church itself, apparently ashamed of the weakness of the then popes, which could only be justified by the demonic forces of the lustful and power-hungry women. The imperial propaganda created with the pen of Liutprand of Cremona, at the end of the XVI century also became the basic source of knowledge for the influential chronicler and confessor of Pope Clement VIII – Caesar Baronius, who directly referred to Theodora as a prostitute, while both she and Marozia were presented by him as “women more lustful than Venus.” Since that time the story of the depraved women who ruled Rome over the heads of the then popes has been quite popular. Nobody has stood up for Theodora and her daughter for centuries, nobody has defended them, nobody questioned the words which came not so much from the mouths of enemies of the Church, but its supporters.

I am not the first, who noticed that the universally accepted narration is incohesive. Looking at the then relations in Rome, it would be difficult to understand why Theodora should be the one in power. Her husband Theophylact, was both rich and influential enough for her not to have to use her womanly charms in order to achieve her goals. It is however, true that Theophylact’s career progressed noticeably faster after Sergius III became pope. Since that time he bore the proud title of consul, Roman senator  and even duke, as well as the papal vestarius (chief financial officer) and he became the real leader of the Roman aristocracy, which had the aim of not only ruling Rome but also not allowing the successors of Charlemagne into the city, since they could have claimed the right to interfere in the politics of the empire. However, are these titles the work of Theodora, or perhaps due to the family connections of the family from Tusculum from which Pope Sergius III also came? And what of Theodora? It cannot be excluded that she had feelings for the pope (or a few popes), but nothing would indicate that her influence on the then politics was greater than that of her husband.

However, let us return to Rome at the end of the IX century. Undoubtedly thanks to the great power of Theophylact of Tusculum, Sergius III could have been placed upon St. Peter’s throne, since that was in the best interests of the family. The pontificates of subsequent popes were extremely brief and nothing more could be said about them other than the fact that they happened because of Theophylact. When it comes to Pope John X (the former bishop of Ravenna), of whom Liutprand of Cremona speaks in great detail, it is only certain that he did not shy away from the battlefield and with success bested Arabs invading the territories of the State of the Church. However, all the political power lay with Theophylact and it was most likely his doing that the papacy became dependent on Roman aristocracy. The pope became a valuable pawn in its hands in the game to obtain greater and greater freedom, but also real authority in the office which he held.

The marriage of Theodora and Theophylact of Tusculum resulted in the birth of two daughters. One of these was the aforementioned Marozia. It was she and her husband Alberic I, who after the death of Theophylact in 925 became the de facto rulers of Rome. We know less about the second daughter – Theodora the Younger. She became the wife of a Roman patrician, from the well-known Crescentii family – John Crescentii. Liutprand of Cremona also paints her in a very unfavorable light attributing to her similarly indecent acts as   those committed by her mother and sister. Well – she was after all the grandmother of Pope Benedict VIII and John XIX the great-grandmother of Benedict IX.

We have no other information (besides the reports of Liutprand of Cremona) that Theodora and her daughters were promiscuous women. However, the popes of those times most likely were, yet they are presented as puppets, with no will or strength of character, therefore their promiscuity is less accentuated since it is not through a fault of their own. After all, who would be able to resists the sinful nature of lustful women? It is difficult not to notice, that the more problems of moral nature experienced by the medieval Church, the more blame was put upon women. Their main traits were dynamism and strength of character, which were in themselves worthy of contempt in the hierarchical vison of the world run by men and only proved the sinful by birth nature of women. 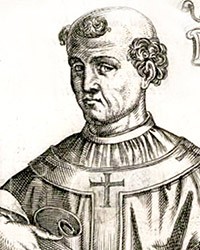 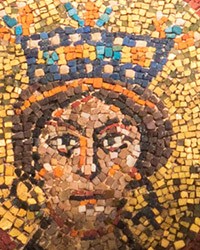