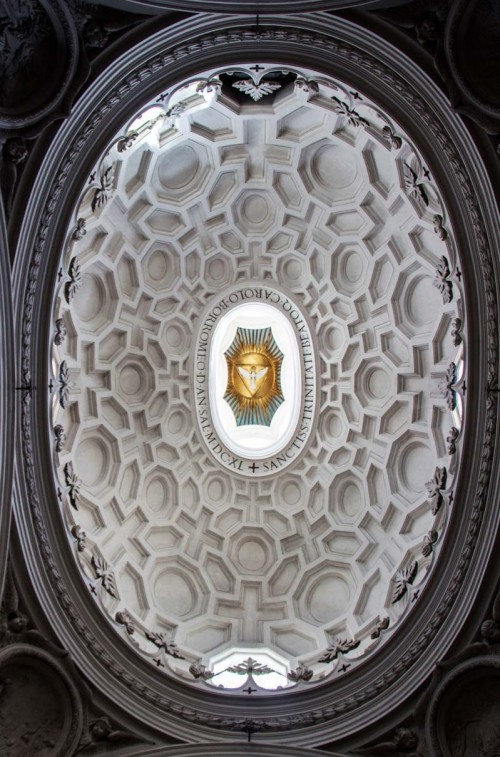 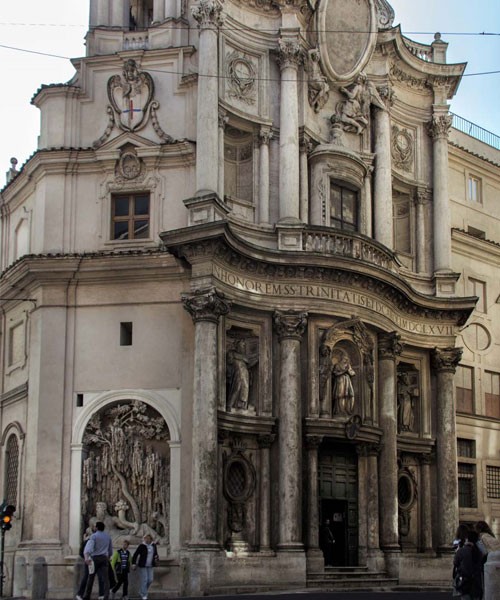 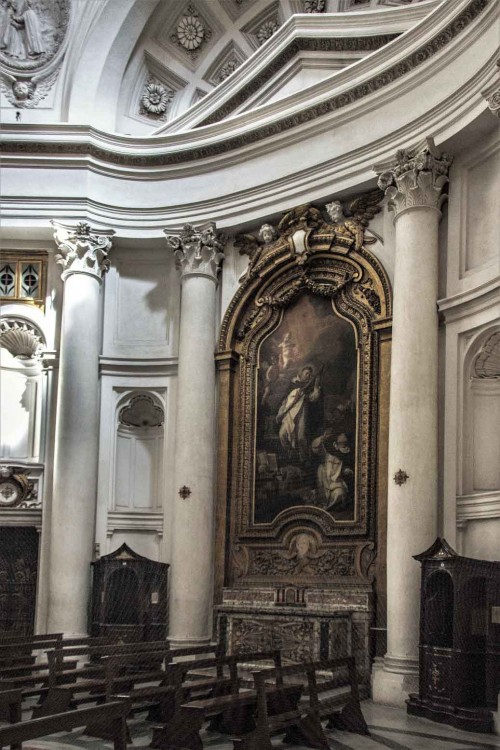 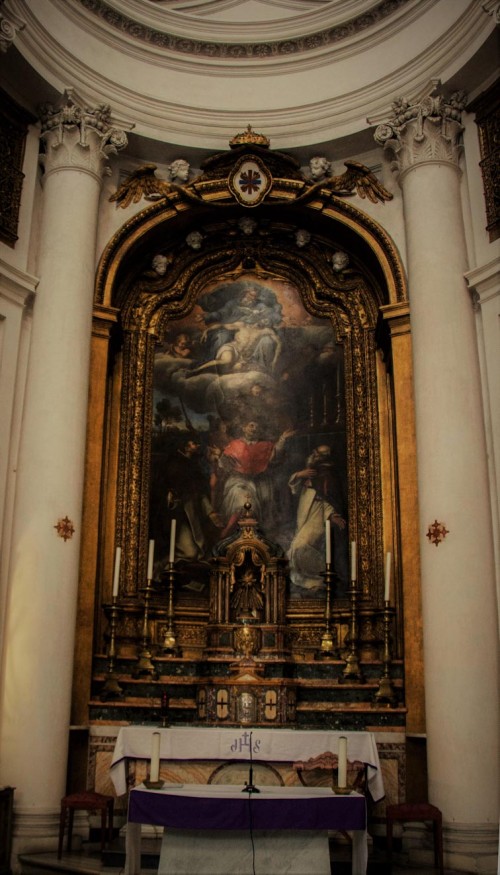 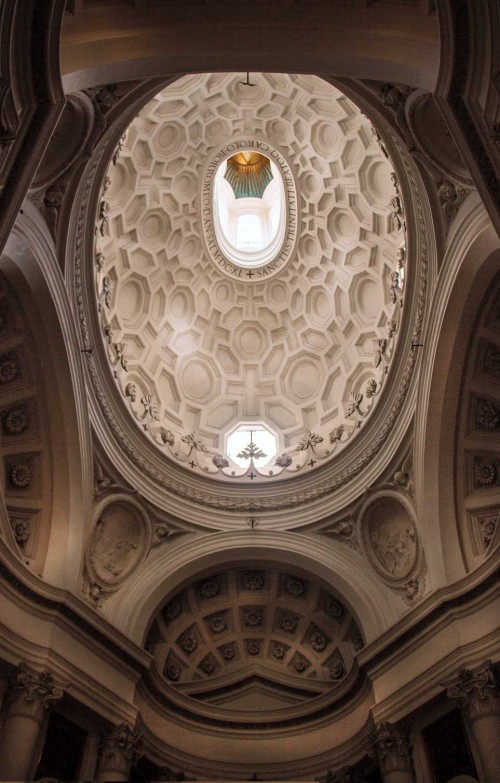 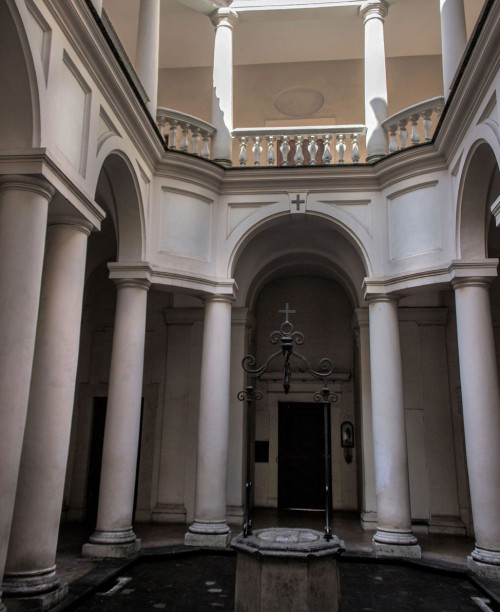 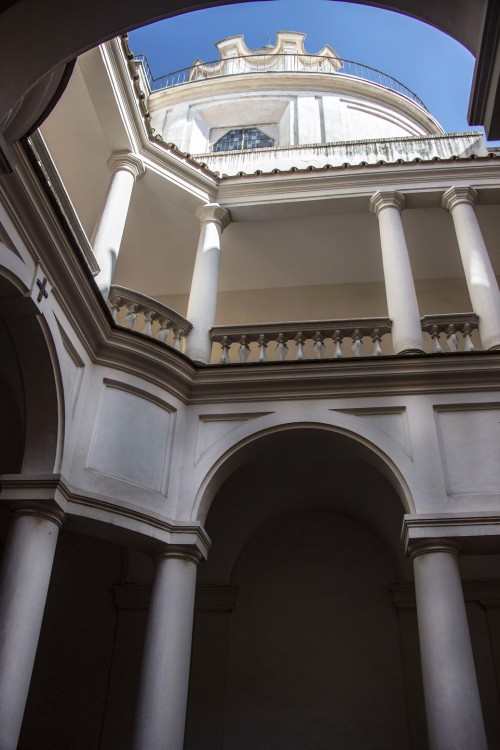 Church of San Carlo alle Quattro Fontane, view of the colonnade of the monastery courtyard 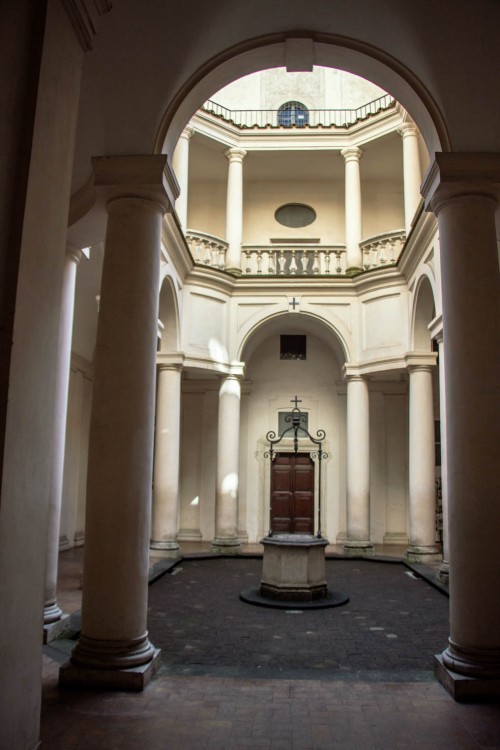 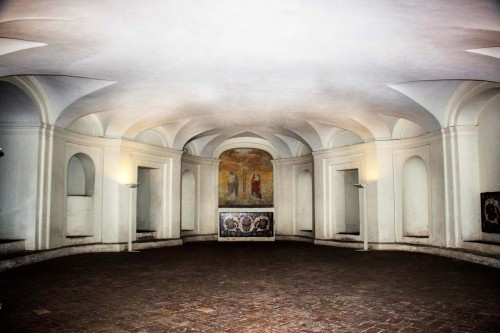 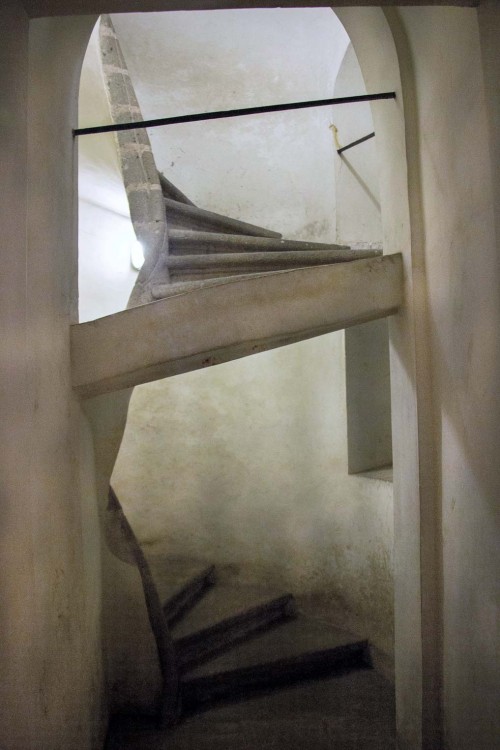 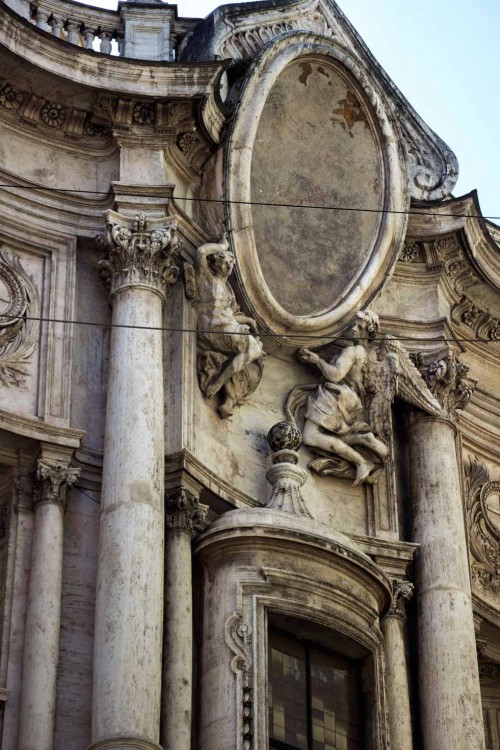 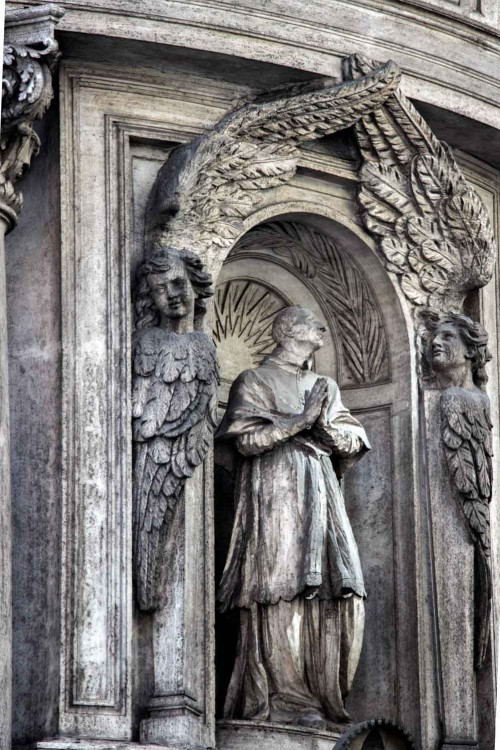 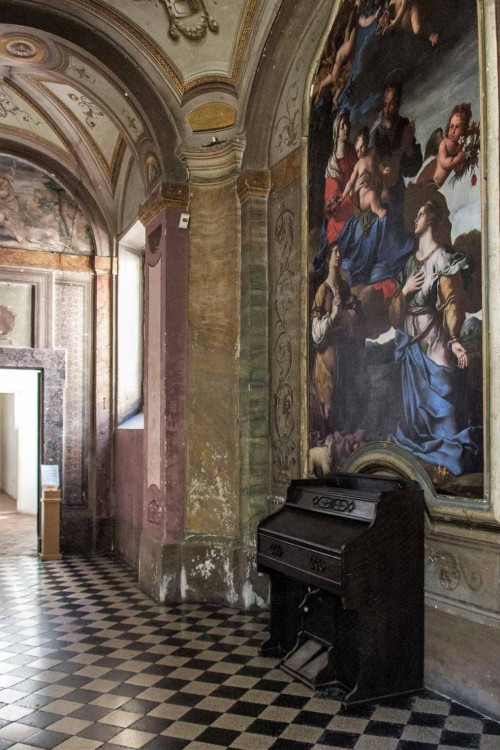 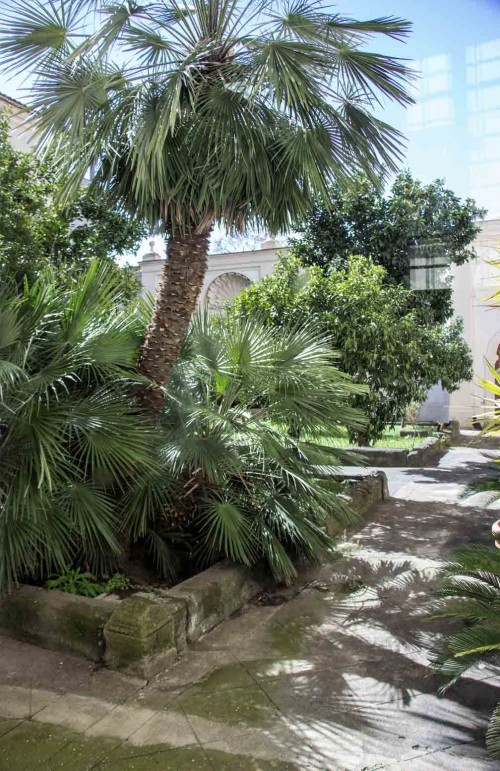 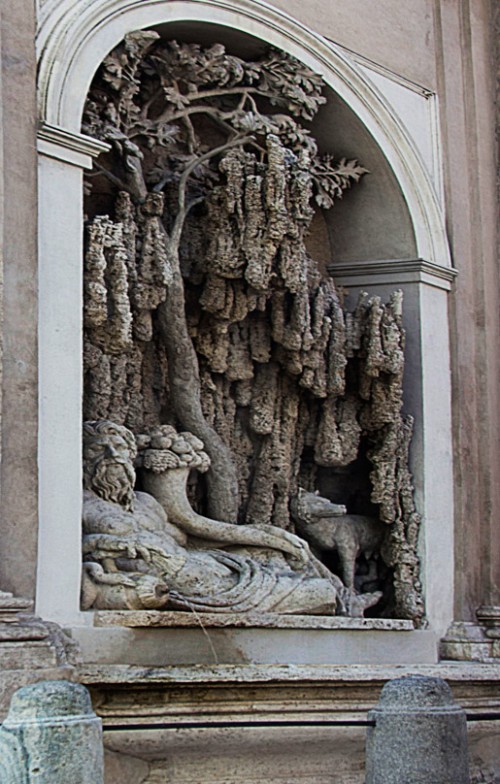 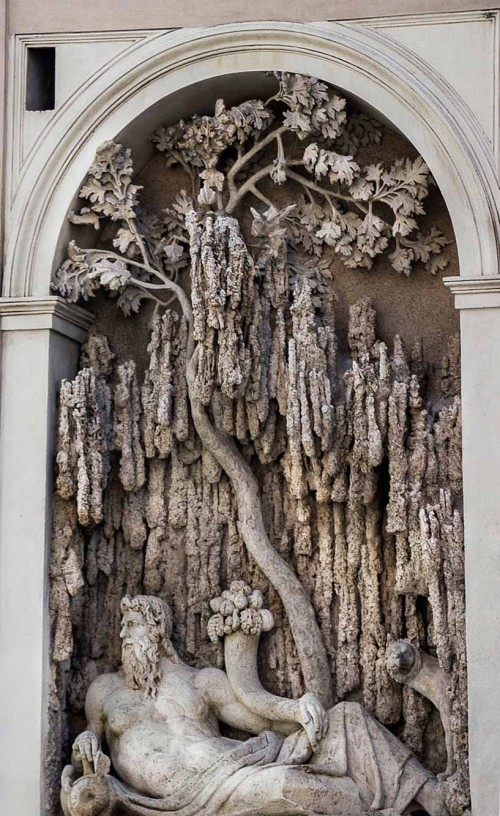 The church was founded by the Cardinal-nepot Francesco Barberini for the Order of the Trinitarians, while the Cardinal Charles Borromeo, canonized in 1610 became its patron. More than twenty years later its construction began, according to the design of Francesco Borromini. The young architect, desiring to display his abilities, had so much wanted this commission, that he did not take any payment for it, while his resources were less than meager. The Barberini family, which so generously funded Roman buildings to commemorate itself, this time displayed frugality bordering on parsimony, which – as it would turn out – did not bode too well for the church itself. On such a small land plot, it was impossible to expect a miracle. Borromini designed the church on the plan of an oval, which he covered with an ellipsoidal dome. Its interior strikes with the whiteness of its walls – an enforced solution, since the financial means were not sufficient enough for marble walling and decorative stuccos. However, this as it would seem shortcoming, at the same time nobilitates the interior and gives in purity. The equally white dome, bereft of the fashionable at that time paintings, provides clear light, which breaks in the coffers, which are its only decoration. Their forms which shrink as they move upwards, create the impression of the dome increasing in size the further up it goes.

The interior of the Church of San Carlo alle Quattro Fontane is like a manifest of the art of Borromini, discarding lines and right angles, preferring wavy, advancing and receding forms. Its fragility and delicateness is further strengthened by a row of monumental white columns supporting the cornice of the church. The walls were divided by niches, in which we do not see any saints; we would also in vain search for great works of art in the interior, or well-known names. The church was poor and did not attract the interest of significant funders. Its main decoration is the painting in the main altar, on which we will notice St. Charles Borromeo accompanied by the founders of the Order of the Trinitarians, painted by Pierre Mignard in the XVII century.

It is difficult to imagine, that with such a small plot, next to the church a convent was constructed, housing twenty monks, library, capitulary, refectory, and a small viridary, which was to be used for walks and as a resting place for the friars. It is adorned with two-level cloisters supported by arcade columns. If we look up and let our eyes wander towards the sky, in this very space we will notice the most sublime Baroque concept – authentic, opening of space onto the vastness of the sky. This idea, which so often gave wings the imagination of the then painters and architects while painting church ceilings, here becomes a purely autonomous concept – in an open part of the sky we will not see rows upon rows of saints, but only the rays of the sun entering and reflecting from the white columns – but then what is the purpose of our imagination?

Another interesting place, which must definitely be witnessed, is the crypt situated in the underground, to which fancy stairs lead. It is filled with a strange atmosphere, on one hand concentration, forced upon us by the simplicity and emptiness of this room, on the other distraction – which is the result of the noises of city hustle and bustle coming from the grated cellar windows.

The church was ready in 1641, save for its façade, since Borromini was forced to leave the construction site. The reason for this was nonpayment of fees, but also arguments with the friars, who were highly critical of his work. As a result, the architect returned to this very place twenty years later. He was however, a different man by then. No longer a young, full of energy enthusiast, convinced that his talent will be appreciated and his deeds recognized, and that as an equal he will compete with a favorite of the popes – Gian Lorenzo Bernini. The latter, still loved, built an equally small church not far away – the Sant’Andrea al Quirinale – and it was obvious that all eyes would be directed to this building, praising it and the genius of its creator. Meanwhile Borromini in 1655, was already a depressive, irritated sixty-year old, who did not obtain the expected applause and recognition for his work. If that was not enough, he was removed from the construction of another unfinished church – the Sant’Agnese in Agone, and blamed for constructional shortcomings. He also, never finished the façade and the bell tower of the Church of San Carlo alle Quattro Fontane. In 1667 he committed suicide, while the works on the façade were completed by his nephew. It also constitutes a creation of receding and bulging lines in the forms of niches which like a powerful frame support the monumental columns.

Looking at this church interior today, it seems more friendly that other Baroque churches covered with marble, gold and paintings. However not only the rawness and simplicity make it so, but also a certain conceptual, not completely thought-out vision. And its creator can be congratulated on his great idea and ensured that justice does in fact exist. Perhaps Borromini did not live to see the expected success, while his life was marked with depressions and disappointments, nevertheless it is this very historical justice that made him into a visionary whose novel deeds will be an inspiration to the architecture of the following centuries. 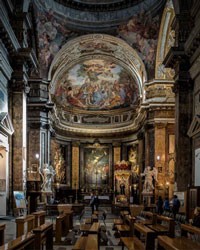 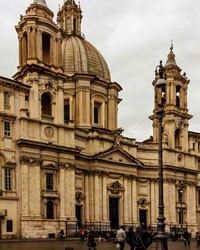 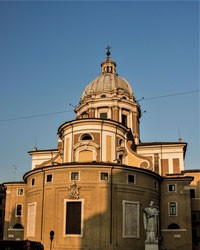 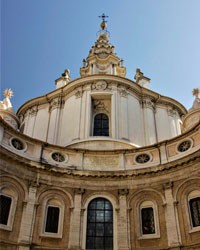